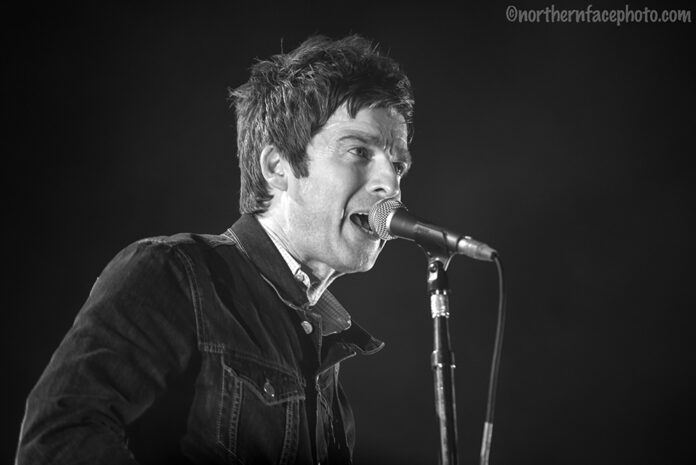 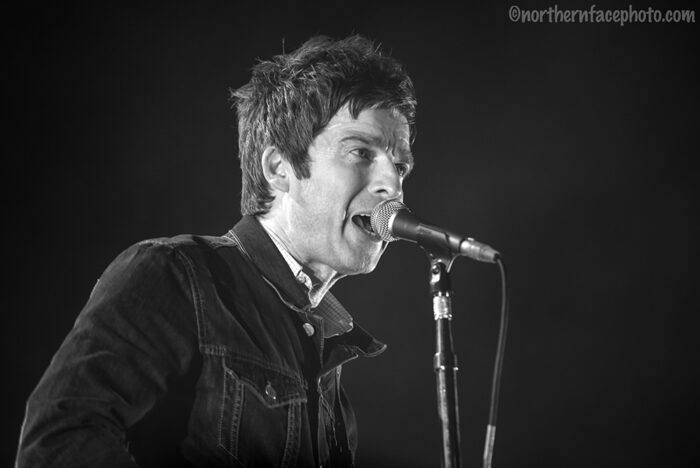 Photo of Noel above and all others on this page © David Gleave.

Noel Gallagher’s High  Flying Birds have been on the road these last few days playing a handful of shows to support the new album Chasing Yesterday (which John Robb reviewed here.) Louder Than War had writer Harley Cassidy catching the first show in Nottingham while renowned photographer David Gleave was in Manchester last night.

In a world where the canon of pop is over-familiar and nice as pie, Noel Gallagher has always been the refreshing voice of honesty. His alpha-male credentials and talent at making everything he says quotable, alongside being pretty good at writing timeless music, leaves no one guessing why he’s playing to a near sold out arena tonight, the consistency of which is heaving with adoring men. With a set list chock full of Oasis songs and a new album released a week ago, material for tonight isn’t exactly sparse.

Pint-sized in stature, Noel arrives on stage backed by a brass section and Crouch End Choir to build up the space and launches wordlessly into a live debut of Do The Damage taken from his new album, Chasing Yesterday. It takes three more songs, including Everybody’s On The Run and an acoustic version of Fade Away before Noel speaks to the crowd, merely informing them he’s going to play a song off his new album in the shape of In The Heat of The Moment. Of course, Noel talks more throughout his twenty song set, mainly to call out audience members and in one applauded moment to tell a group of rowdy lads “to stop shoving the girls” which is met by cheers from the crowd. 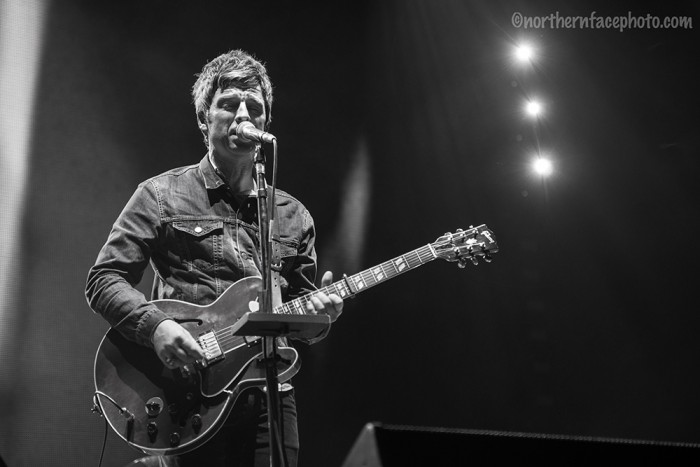 The crowd themselves are akin to a football stadium, where arms are held aloft, heads are thrown back and grown men are hugging and bellowing to songs that have shaped their generation and underclass. Gaze past the Fred Perry shirts, Adidas originals and feather cuts and what lies underneath are people clutching onto that last thread of the euphoria of guitar music, relating to Noel’s self-searching melancholy and hoping it never fades away. The best aspect is the feeling of togetherness. You know there’s no pretension or beard-stroking / pondering to be had, you just want to hear some tunes and see one of rock music’s legends do what he does best.

Noel sounds great tonight; his vocals sometimes seem over-stretched for the anthemic choruses he writes so well but he’s saved by the sheer fact that the crowd love the sound of their own voices too, roaring his lyrics back to him. Ballad Of The Mighty I sounds excellent, a chugging, leering number that allows a glimpse of Noel’s unrelenting determination, which rings in your head long after he’s finished. He also manages impressive versions of Digsy’s Dinner and Champagne Supernova, which holds true to the original amiably, but doesn’t offer the grit and charm of Liam’s growl.

Chasing Yesterday is a stellar album in itself but doesn’t quite carry the uplifting, summer-drenched anthems that his debut held aloft which is why AKA… What A Life is brought on for the encore, sandwiched between two of Oasis’ most popular songs; Don’t Look Back In Anger and The Masterplan. Perhaps the best songs of the entire set, the familiarity of Don’t Look Back In Anger and it’s incredibly delivered chorus bring the first feeling of warmth and solace from the entire night and then The Masterplan shatters every illusion that Oasis’ B-sides weren’t good enough to be singles.

Sometimes, it almost looks as if Noel is bored with being there. He’s a phenomenal talent stuck in his own comfort zone; if he actually practiced what he preaches regarding other artists he could still be innovating in 2015. Instead he sticks to the lad-rock formula, which, whilst it sounds great and is massively popular, doesn’t really inspire; much like tonight’s gig. It’s got all the right components of being an incredible live show, but it just doesn’t blow your mind. It’s likable yet unremarkable and coming from one of pop culture’s wittiest and most-clued up coves, the lyrics are clichéd and samey, lacking the exciting, antagonistic form of social commentary that made Noel famous in the first place.

The obvious, major problem is that Noel isn’t a working class lad anymore and doesn’t have to write and fight for the adoration. His no-bullshit persona doesn’t allow for alteration and it’s clearly an argument of “if it isn’t broke, why fix it”? A highly successful set in whichever way you want to look at it; people will never tire of the Gallagher brothers and whilst Noel lacks the iconic frontman stance his brother does, his charisma and talent at writing a decent song or two makes him play arenas with unforgivable ease.

All words by Harley Cassidy and all photos by David Gleave. More writing by Harley on Louder Than War can be found at her author’s archive and you should definitely check out Dave’s website northernfacephoto.com.