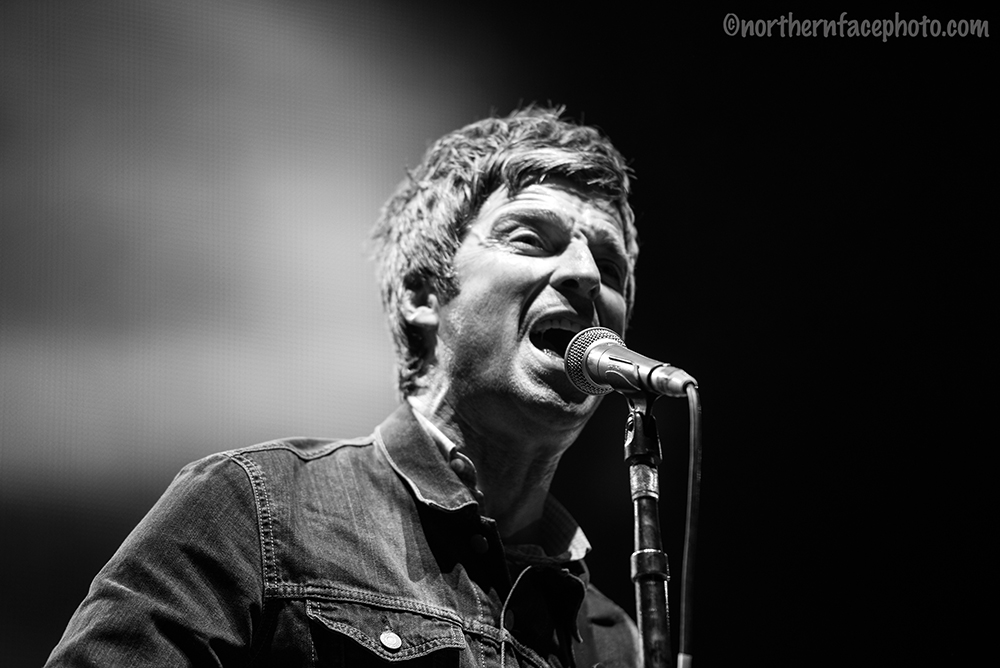 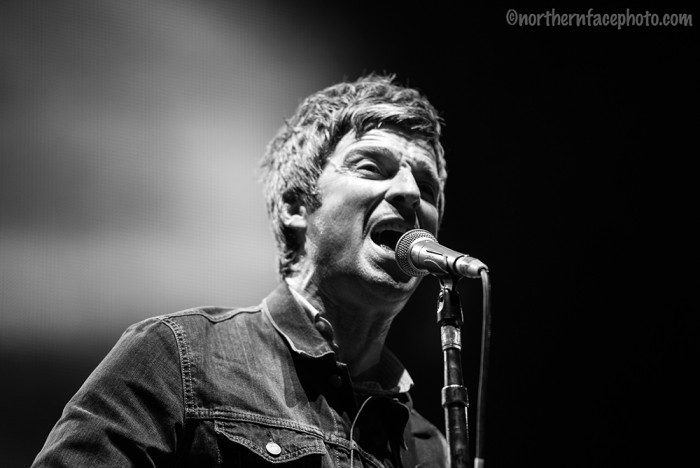 Paying tribute by recognising Prince as one of the giants Oasis stood on the shoulder of and working the Glasgow crowd with indie anthems, Noel Gallagher and his High Flying Birds storm the Hyrdo.

Glasgow’s Hydro is lit up in purple as a tribute to Prince whose death has been announced just four short months after the passing of David Bowie.

‘Let’s Go Crazy’ blasts from the P.A as Noel Gallagher and his band position themselves in front of a giant Purple Rain era shot of the singer. It’s an eerie sight as some are still digesting the news but within moments it’s business as usual as ‘Everybody’s On The Run’ takes flight.

Visually the band line-up and rarely move all night with Noel taking centre stage flanked between bassist Russell Pritchard, session guitarist Tim Smith and former Oasis keys man Mike Rowe. What the fans bring, particularly in strongholds such this is a key element and it’s not long before droves of Glaswegian swagger merchants are knocking back pints of bronze liquid while charging down the front to bounce along to Definitely Maybe era demo ‘Lock All The Doors’.

A lager shower during ‘Champagne Supernova’ is inevitable, the splashes seem to rain down in slow motion onto the stage leaving one roadie to mop up the mess around Rowe who seems to take it all in his stride. The song has traded it’s mid ’90’s psychedelic explosion for a soft shoe acoustic shuffle. While Oasis songs make up nearly half the set this is a less bombastic and slicker presentation perhaps attracting more traditional rock fans enthralled by the Pink Floyd leanings of ‘Riverman’ and solid post-Oasis radio playlist hits such as ‘If I had A Gun’ and ‘Ballad Of The Mighty I’.

It’s nearly 22 years since this writer first saw Noel play with his old band in an audience packed with council estate kids at the Barrowlands. Within a couple of songs Liam had walked off the stage while pointing furiously at his throat, he was said to have drained a Guinness in the Celtic pub next door before jumping in a black cab as his brother took over vocal duties.

What stopped a full-on riot that night was a clutch of non album tracks and b-sides in the ‘Sad Song’, ‘D’yer Wanna Be A Spaceman’ and ‘Half The World Away’ mould- significantly many of those songs make up the backbone of the set tonight. On ‘Listen Up’ in particular there remains a vulnerability and beauty, Noel’s vocal still delivers the conviction of a young man trying to transcend the world he is writing about. But Smith’s perfectionist playing doesn’t quite fit-somewhere in the background you can imagine him being harangued by a mop-topped Noel in red tinted Lennon shades dishing out slabs of distorted noise as Liam bellows “it doesn’t matter if it’s out of tune” as he did on a famous early live recording of ‘I Am The Walrus’.

Undoubtedly there was something of a purple cloud hanging over tonight’s gig, with the news clearly affecting Noel he offered “so I was in a band once, we had an album called Standing On The Shoulder Of Giants and one of those giants was Prince.” He then instructed the Glasgow audience to help him pay tribute for a verse of ‘Live Forever’ followed by ‘Wonderwall’. How many of us have been inspired by these songs, they weren’t just Noel’s escape route to a better life-they aided all of us. George Martin described him as the greatest songwriter of his generation. Perhaps Noel and Liam are two of the last truly great rock n’ roll stars to come from these islands that were shaped by reforms designed to strengthen the working classes. Over the last while we’ve heard Noel along with Bobby Gillespie and Irvine Welsh all suggest they wouldn’t get a look-in in the current elitist climate where privilege hampers what’s possible for the disadvantaged. Aspiration has literally been kicked out of working class kids.

Tonight Noel finishes with ‘Don’t Look Back In Anger’ it’s just over 20 years since the song was  number one-it was one of those great ubiquitous British rock n’ roll records that would become a radio staple. Down the front the stars of camera phone give the performances of their lives manically in front of tiny screens, they rarely look at the stage – it’s a completely surreal moment.

Glasgow can’t get enough of Noel Gallagher, it’s his second sold-out show at the Hydro in just over a year. A truck outside advertises that he’ll be back for a summer gig in the city’s Bellahouston Park supported by fellow Irish Mancunian Johnny Marr. Hopefully next time in happier circumstances.

All words by Richard Purden.

Image by David Gleave at Northern Face Photo (taken in 2015).