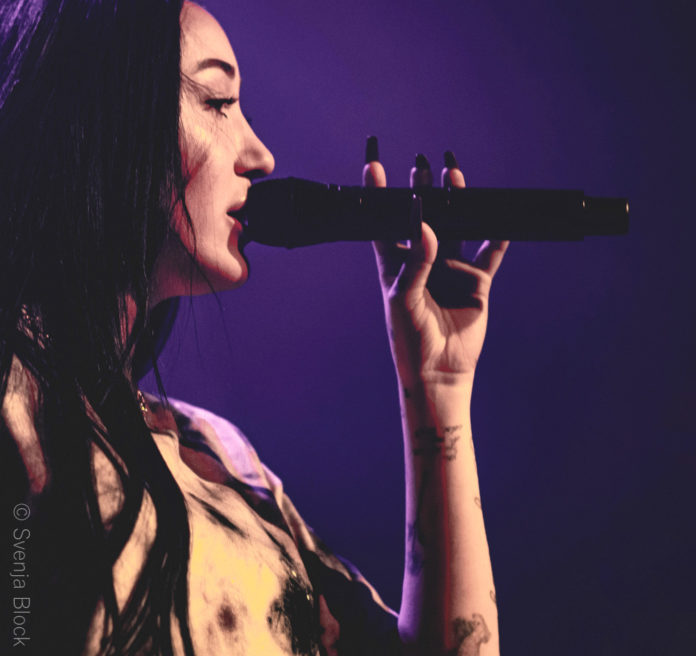 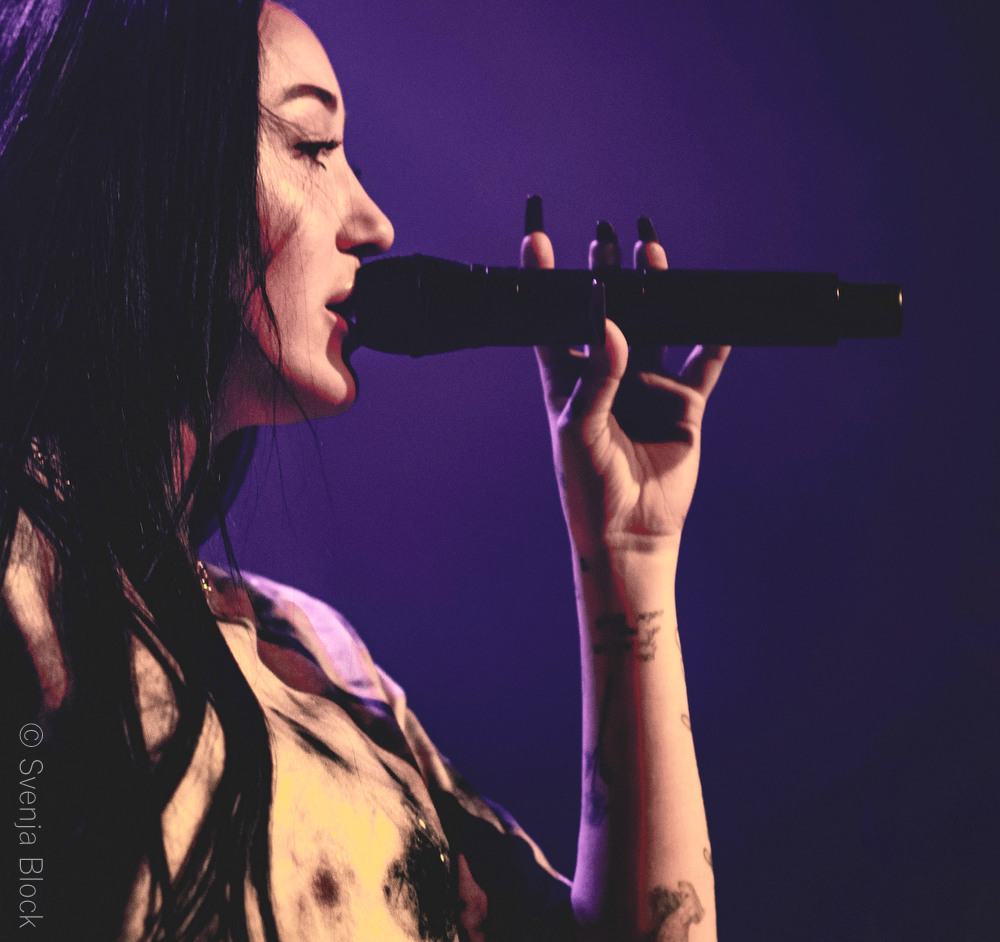 In her first-ever UK performance, Nashville-born Noah Cyrus makes her way over the pond to play a single sold-out show at the O2 Academy Islington as part of her eagerly-awaited, The Not So Tour, Tour. Intrigued by Noah’s unique brand of genre-defying folk/pop/synth, Alice Monty (words) and Svenja Block (photos) head down to experience the spectacle for themselves.

Let’s get it out of the way early doors, if you weren’t already aware, Noah is the youngest of the all-singing (and twerking) musical Cyrus clan. With her career still in its relatively early stages and an album yet to be released, Noah undoubtedly has enormous (cowboy) boots to fill on the music scene. 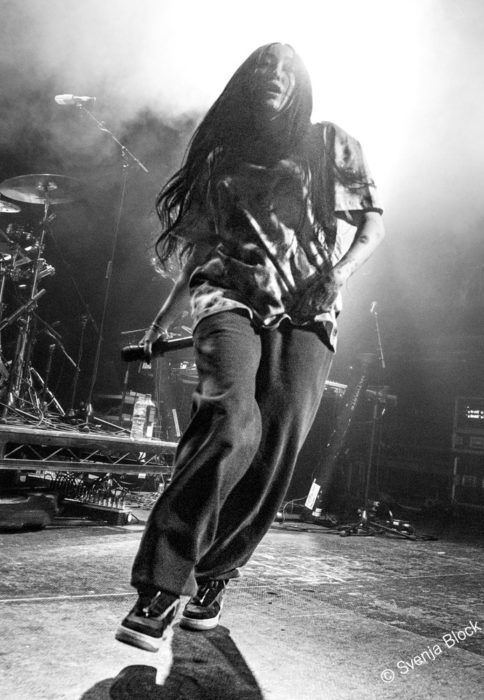 However, with the singles, EPs and collaboration tracks Noah has been involved with so far, she appears to be achieving great success in differentiating herself from her esteemed decade-defining kin, as she establishes her own contemporary sound and loyal fanbase.

As the stage lights fade and the crowd vivify, I hear a rogue chant of “Noah, Noah, Noah…” that soon swells into a venue-wide clamour of yells and applause. Appearing effortlessly, comfortable and cool, Noah rocks up centre-stage. With a playful smirk she utters “What’s up London?”, and kicks off with a short and sweary rendition of Fuckyounoah.

All warmed up, Noah drops straight into her second song, where we get our first whiff of her exquisite vocal range. Leaving us mere mortals down on earth, Noah ascends to hit some impossibly high notes with little pause for breath during the celestial sensation, Live or Die.

Safely back on planet earth, Noah heads into her next song, All Falls Down. The crowd revel in the rebellion as Noah flips us her middle fingers during the opening lyrics of this catchy but clever happy-sad song.

Noah does a great cover of Tones and I’s track, Dance Monkey, which gets the whole venue grooving along with her. Particularly on this song, the sound of the live keys and drumkit accompanying Noah tonight, give this a fun, garage-rehearsal vibe that I really find myself enjoying. With tongue firmly in cheek, Noah introduces the next song as what will soon be her next single, I Got So High. We get treated to some big, powerful vocals from Noah on this more country-esque track, but with a bizarre cluster of lines that wouldn’t sound out of place in a Jay and Silent Bob movie, I am not entirely sure what to make of the lyrics. I get a feeling the crowd has not figured out if Noah’s lyrics are in spoof or serious either, but they proceed to giggle and cheer once the song is through.

The mid-point of the show is marked by a pair of impressive performances as Almost famous is succeeded by Lonely. I can imagine Noah felt anything but lonely as the crowd chimed in at the top of their lungs for the choruses for both brilliant tracks.

Pausing for a brief glug of water, Noah takes a moment to get serious as she opens up about her experiences with depression. This marks a very special few moments where I hear rogue cries of “We’ve been there” and “We love you” from individuals in the crowd. Concluding her speech, Noah delivers her take-home message “You’re not alone.”

There’s a change of pace as Noah cracks on with a cover of Mt Everest by Labrynth, collaboration track Ecstasy, and the more hypnotic, I Wanna Be Your Lover.

Introducing last year’s hit single, July, Noah explains that the song is “changing her life” and that “guys are real assholes”, before she sits down at the front of the stage. The performance is stripped back and simple, yet truly stunning.

In a massive finale, Noah drops one more bomb of a song with crowd-favourite, Make Me Cry. From the get-go she leads everyone in an arm-swinging sing-a-long, that culminates into an eruption of cheers and applause. Gracious Noah concludes the show by hopping off the stage and taking a step up into the crowd with her arms out-reached, in a genuine attempt to touch as many of her adoring fans as possible. 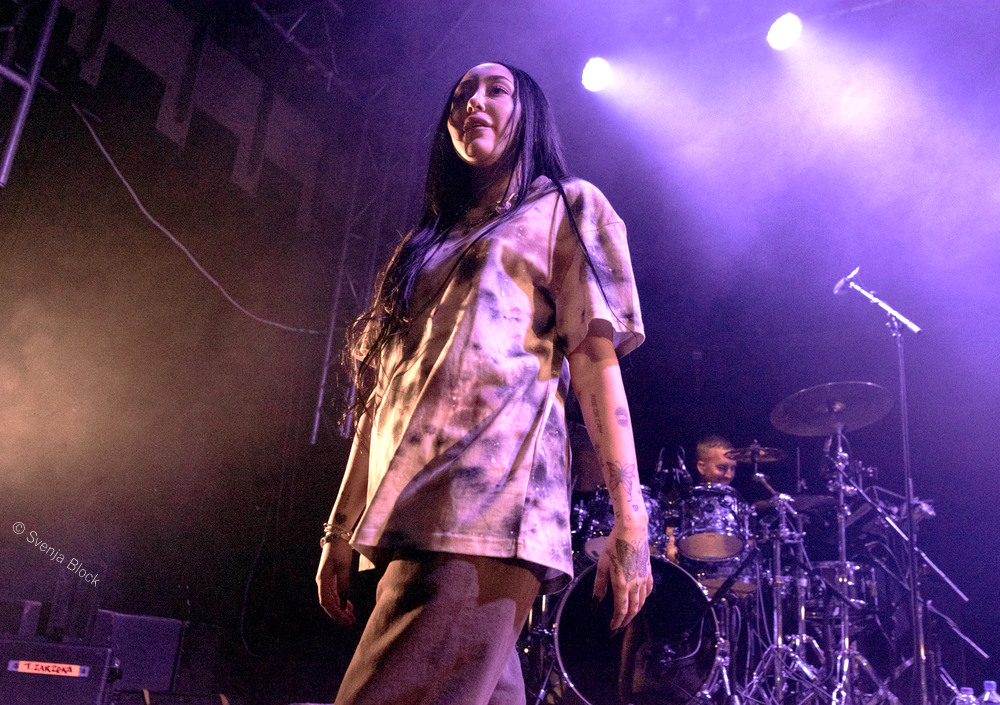 All words by Alice Monty. You can find more of Alice’s writing at her Louder Than War author’s archive.