Home Film Reviews No Spicy No Fun – The Rebel Riot In The UK –... 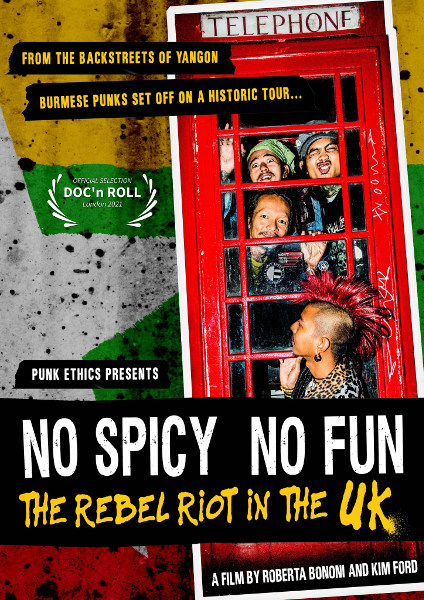 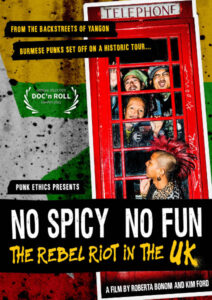 No Spicy No Fun – The Rebel Riot In The UK

No Spicy No Fun – The Rebel Riot In The UK is an uplifting reminder of the power of punk rock to connect people and change lives as it follows a band from Myanmar immersing themselves in DIY culture on a UK tour. Review by Nathan Brown.

We previously mentioned the UK Premiere of this film as part of the Doc’N’Roll film festival in October. Now it is available on the equivalent of general release to watch from your home it deserves a full write up and more exposure.

No Spicy No Fun – The Rebel Riot In The UK opens in Yangon, Myanmar, as the band gather their belongings and board a flight half way across the world to embark on a tour that was only made possible through a crowdfunder by the Punk Ethics team.

Taking the opportunity to soak up some UK culture, the band clearly enjoyed themselves on a punk rock history trip around Soho. They weren’t so keen on bland English food – they like it spicy “No Spicy, No Fun. More Spicy, More Fun” hence the film title.

This is more than just a documentary about a band on the road. Kyaw Kyaw, Zarni and Oakar talk about how they discovered punk, the band’s formation, motivation and aspirations. For the people of Myanmar with military occupations and people being shot in the street “solidarity can fight the system”. The Rebel Riot asked themselves “How can we fight back?” and their answer was “We can make music. We can shout”. Punk gave them agency, “power to choose my way”.

If you check out their Facebook page, The Rebel Riot spell out their communitarian attitude “We are not just a band but also a punk community, we work together as a punk scene organising social activities to help people, standing together in solidarity with our brothers and sisters.”

Of course there is the footage of the band travelling and playing at DIY gigs as they toured with the Restarts around the country accompanied by Ko Nyan Lin, the first punk in Myanmar, armed with a video camera. This includes the Decolonize fest, and showcases some key venues on the DIY punk circuit.  There was one particular moment when I actually went to cheer along with the crowd as a song ended, I was that drawn in.  The film maintains its momentum with a soundtrack of UK punk bands including the likes of Contempt, Autonomads, Poisonous Cunt, Oi Polloi, Restarts and Active Slaughter.

The story ends where it started, back in Yangon with a prized pair of Doctor Martens being presented as a gift from the band’s travels.

This is an uplifting film for anyone who is still in love with punk rock. My take away was that punk can still be a force for change rather than a throwback soundtrack. This film also highlights how vibrant and far reaching the DIY punk scene is. Or I should say the DIT scene. To paraphrase The Rebel Riot, ignore the cliques and schisms, if you want stuff to change, get on and “Do It Together”.

You can stream or buy No Spicy No Fun – The Rebel Riot via Vimeo.  All the proceeds from the sale or rent of this film are being donated to the Food Not Bombs Myanmar project.