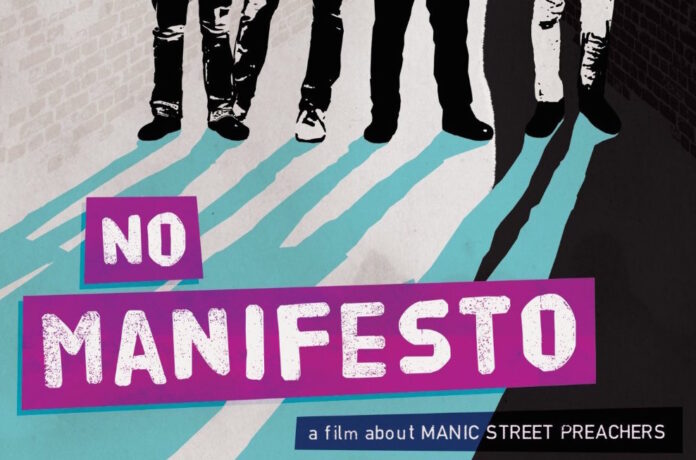 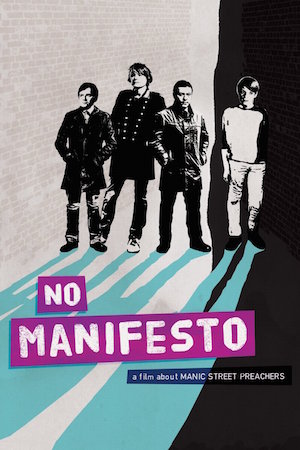 No Manifesto – A Film About Manic Street Preachers (WibblyWobbly Productions)

“No Manifesto: A Film About Manic Street Preachers” tells the story of the band who arrived on the British music scene with ambitions “to make one album, sell 16 million copies of it, and then split up” but are still here a quarter of a century later with multiple hit records and one missing member under their belts. For Louder Than War, Fergal Kinney reviews what’s billed as “a comprehensive look at one of Britain’s most confounding bands”.

“More fans of ours have gone into education than have gone into bands” explains Nicky Wire during this film which is as much focused on the Manic Street Preachers as it is the Manic Street Preachers’ fans. The fans’-eye-view music film has become increasingly the mode of choice for avoiding rockumentary cliché in recent years, with the treatment being applied with varying degrees of success to the Stone Roses and Pulp – whose limp ‘Pulp: A Film About Life Death and Supermarkets’ details exactly where the format can go wrong. Fortunately for director Elizabeth Marcus, the fans of the Manic Street Preachers are largely cerebral, bookish and intensely passionate – with, of course, exceptions. An antagonistic, often bitchy streak runs through both band and fans alike; one long-standing fan repeatedly requests early curio ‘Sleepflower’ and the band eventually include the track in the set list purely to take delight in silencing the heckler – or “that little prick” as drummer Sean Moore curtly refers to him.

Though the film is largely focused on the recording of 2007’s ‘Send Away the Tigers’ – more on which later – it charts the rise of the band from their origins in the mining town of Blackwood, South Wales. Nicky Wire produces a picture of the band in their teens sat squashed on the top bunk of a bed, and the most touching and engaging parts of the film are to be found here. The four sullen Welsh teens bond over Billy Bragg, send one another Joe Orton-esque newspaper collages and develop the philosophy of ‘denialism’ (“don’t take any drugs, always wear your guitar low, don’t like the Beatles or ever admit to liking the Beatles”). The subtext to this, of course – and indeed the elephant in the room in any evaluation of the Manic Street Preachers – is the 1995 disappearance of Richey Edwards.

“They’ll always be known as that band where the guitarist jumped off a bridge” explains one fan, whilst another describes Richey’s “problems with self-mutilation, issues up here in the head…” as if discussing a bus timetable, though thankfully director Elizabeth Marcus has much greater tact than many of the Manics’ fans on display here. Archive interview with a visibly emaciated Edwards is interspersed with headlines from the music press at the time – twenty years on, the coverage appears dated, insensitive and staggeringly irresponsible – and the unsentimental but highly insightful recollections of the band. James Dean Bradfield observes that suddenly “life was more important than faint notions of denialism”, and as the band experiment with a broader sonic palette, their elevation from cult indie band to mainstream chart success follows, via large concerts in Cardiff and – slightly more controversially – Cuba.

Much of ‘No Manifesto’ follows the band in the aftermath of their commercially and critically panned album ‘Lifeblood’, picking up the pieces and putting together the record that would propel them back into the charts, 2007s ‘Send Away the Tigers’. This, however, is where things get tricky. The film fails to recover from the simple fact that its narrative arc centres around a record of only lukewarm significance in the Manics’ ample discography, without even the salvation of the record being remotely contemporary. Though the access granted by the band makes this one of the most truly candid rock films in recent memory, in 2015 the footage amassed in 2005 struggles to resonate and becomes increasingly bogged down in trivia. Does anyone really remember The Delays, let alone want to hear their musings on the Manic Street Preachers? Is the extended scene of James Dean Bradfield preparing his breakfast really necessary? The film ends abruptly, discussing the band somewhere around 2009, and does much to scorch any positive perception of the film gained early on.

‘No Manifesto’ makes no secret of being a film about fans of the band for fans of the band, yet it is those same fans who will feel most short-changed and frustrated by a film released in 2015 that ignores all of what has happened in the years since the bulk of the film’s footage was amassed. The Manics’ have always been a band capable of inspiring great interpretations of their work – be it Kieran Evans and Robin Turner’s documentary work for the band or Simon Price’s towering biography – and though one day a great film will be made about the band, ‘No Manifesto’ is not it.

The website for No Manifesto – A Film About Manic Street Preachers is here: nomanifestofilm.com. You can go there to buy a copy of the film.