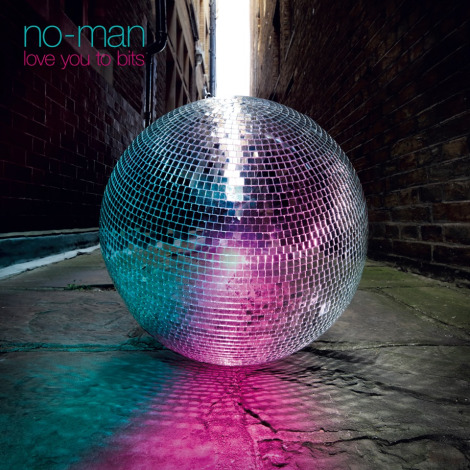 no-man: Love You To Bits

First release for eleven years for the no-man duo of Tim Bowness and Steven Wilson.

First impressions are simple. Love You To Bits is quite some departure, possibly inspired by Wilson’s sense of contrariness in punctuating his To The Bone album with a hefty wedge of Abba-esque kitsch in Permananting.  Even the King Crimson T-shirt wearers at his live shows were ‘encouraged’ to stand up and shake a leg. It’s also a key moment that reveals where Bowness and Wilson are now;  their Venn diagrams finding some common ground in a current interest in electronic music and honing in with a vengeance.

It strikes as akin to what U2 tried with their Pop album, or at least their Discotheque single, but a much more fully-formed effort without reverting to type. So let’s go discotheque with two lengthy (17 and 19 minute) compositions, each split into five ‘bits’ (or ‘pieces’ depending which of the two halves you’re listening to), that kick off with some industrial noise and electronic throbs straight from a space rock opera before the dance beats make their appearance. Tim Bowness utters “what are you thinking?” and we’re off into the full-on Love You To Bits trip. “What are you dreaming? I like to know what’s on your mind” is not just a lyric but a genuine thinking aloud moment.

The brief ‘second bit’ offers a more standard no-man gentle lull before a clipped guitar line leads a similarly brief electro-space workout and the realisation that should anything slip into a lush no-man territory, the experience will be short-lived.  The fizzing freakout section of ‘bit 4’ and the recurring musical and lyrical themes in ‘bit 5’ see us traveling the tunnel of time to big flared, Morodor-fashioned,  Saturday Night Fever. But wait; having been entranced, the sequence fades with some Hovis advert brass sounds in a gentle calm after the storm.

Having experienced that baptism of fire, Love You To Pieces seems very much cut from the same cloth. We’re now in deep and there’s no respite although the first ‘piece’ hints at a less intense and more groove-orientated sequence. Having said that, ‘Piece 4’ in particular is a dreamy couple of minutes where thoughts of Vangelis and Tangerine Dream, like the lyric, float above and around and we’re temporarily back into the more anticipated melancholy no-man territory.

It’s a chance to contemplate and muse over the disappearing of time and “the stranger beside me, the stranger inside me” and after all the general high octane bluster, a moment of reflection.

So, Love You To Bits – long-anticipated, definitely unexpected, certainly exciting, without question the most un-no-man like album you’d expect, all of which leads to the inevitable conclusion that you’re going to have to agree with the Bowness/Wilson conclusion: bizarrely, everything adds up to the fact that this is the most no-man-ish no-man album of all.

The question posed by the lyric “Do you move on or stay behind?” swings definitely towards the former.

There are lots of excellent interviews with Tim Bowness online about the new record although you can check our interview with Tim here.

Listen to a montage from the album here: