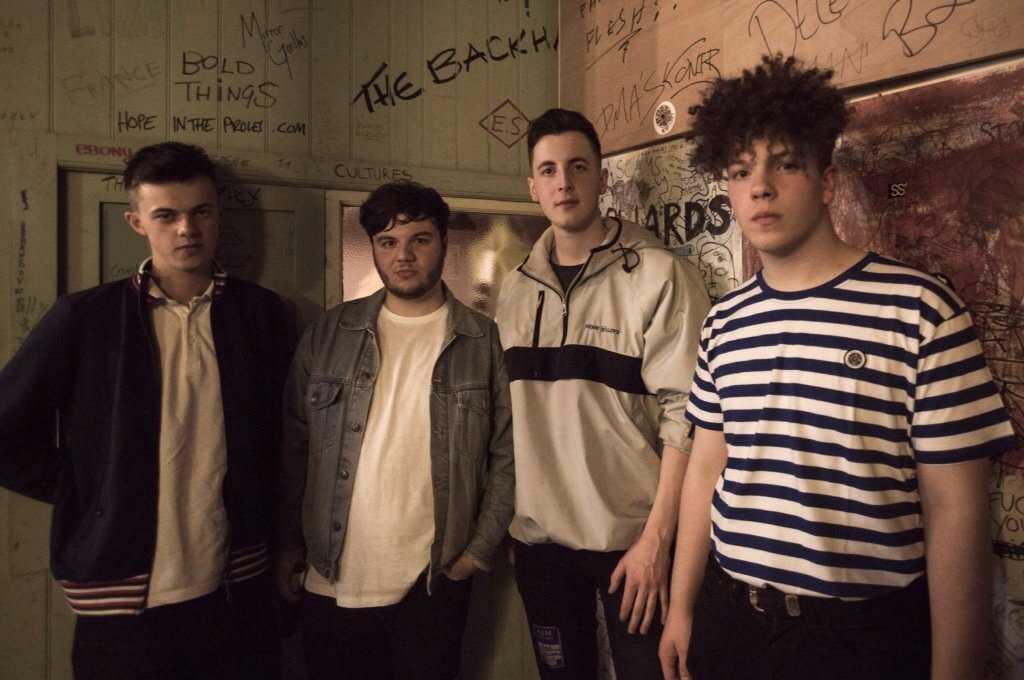 No Hot Ashes were back at The Night and Day in Manchester’s Northern Quarter for their label’s launch night on Friday. Nigel Carr was on hand from Louder Than War and reports back below.

Playing With Sound, (PWS), a small independent record label based in Warrington, have picked the band up for the release of the single Goose, the stand out track in their live performances. It’s PWS’s launch night with their recent signings Gold Jacks and Holly and Hester Rose also performing – NHA are headliners.

They open with The Message, a huge funk-rap classic. Its massive bass fuelled sound is expansive and polished, their time at Pear Mill rehearsal rooms has not been wasted. It’s slick as fuck and rocks like hell with a blasted 99 Problems rap to boot.

The band completely gel as a unit, they love it, they’re enjoying it and it comes across with Isaac’s flailing arms and on stage jigs – he’s baiting the audience with arms outstretched and waving his fingers. It’s banging, progressive, future-psych tinged funk with rapped edges and the crowd love it.

I’ve seen this band at a few venues over the past year but it’s the first time I’ve seen young glitter faced girls and hipster lads dancing wildly. It’s great to see that they are picking up the younger, more switched on audience they deserve.

Easy Peeler stands out for Isaac’s wild abandon on stage and its stop, start, Led Zeppelin’s/Black Dog style precision. In fact the timing is so tight they could stop a careering truck on it!

During Skank, the front man puts his guitar down and chucks his legs around, back to the audience, shoulders pulsing like a puppet without strings. He really is a prodigious talent, but it’s the band as a unit that really impresses, Jack’s bass is astonishing, Matt’s drums, faultless and Luigi’s space rock guitar licks add depth and texture.

Cool Cat is a new song, more spacious with a deep funk groove. I had a brief chat with Luigi, the band’s lead guitarist and he told me that they were off down Gavin Monaghan’s Magic Garden Studios again next month to record the new track for future release.

Finally the awesome Goose – It’s a cracking tune and has come to define this band’s sound – it’s funky, it’s poppy and a huge crowd favourite. The song gets a fresh, souled up wash with an extended freak out towards the end, exciting the now full-on, slamming mosh pit.

2016 could well be the year for these Stockport lads – they’ve seen their mates Blossoms break through and in my opinion it’s only a matter of time before they attract the attention of a major. They just get better and better as each release is absorbed in to their set-list.