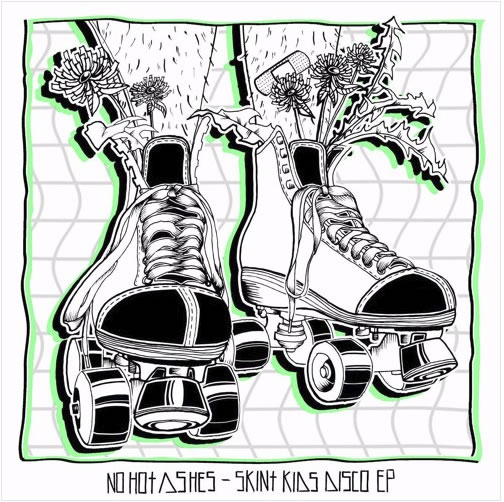 No Hot Ashes have been steadily gaining popularity on the Manchester music scene since making their debut nearly three years ago. Their unique brand of Future Funk (As we coined it) sets them apart from the other factions of rock, punk and post punk streaming out of our fair city.

Slow to release new tracks on to the market, their existing catalogue has just passed the one million views mark on Spotify. Everyone who follows them has been baying for new material and with a spanking new contract with Liverpool’s ModernSky UK and a session down at Gavin Monaghan’s Magic Garden Studios in Wolverhampton, there is no stopping them!

Eight Till Late is the first track taken from the forthcoming Skint Kids Disco EP and sees the band take another giant leap forward in terms of song writing and production. The track opens in riff territory giving way to Isaac’s gutsy vocal over a solid funk driven beat.  Luigi’s ever-present spangley guitar weaves its all the way through this track, providing a series of punchy breaks underpinned by Jack Walsh’s fiery bass.

A true progression from their stripped down pure funk sound, richly layered and dare I say, more commercial in nature, this track is squarely aimed at their growing teen audience. It even gives them the opportunity to shout along with the chorus!

No Hot Ashes are filling venues across the city with a headliner at Club Academy coming up on 16th December. I see nothing but great things happening from these affable hard working Stopfordians! Catch them if you can; amazing live, you’ll leave with a proper grin on your face!

Eight ‘il late is available on all major Download platforms including Spotify now!