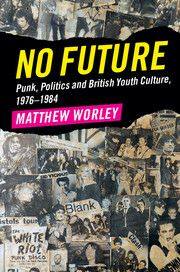 Upon first picking up “No Future: Punk, Politics and British Youth Culture 1976-1984”, it would be easy to have the initial thought “do we really need another book on the punk era?” After all, as undeniably brilliant as much of the writing on the era is, surely the bookshelves of any punk scholar are starting to creak somewhat? The short answer is, yes, we probably really do need this book in particular, a fresh and insightful look into the politics of it all. It is the work of the consistently excellent historian Matthew Worley, whose previous works on politics and twentieth century history have been essential reading; and his knowledge of the punk era and youth culture, as documented in an impressive array of articles for history journals, is always fine-tuned and meticulous. “No Future” continues in this vein. Rather than going down some nostalgia-tinged journey, Worley presents a series of digestible chunks of history which strip punk and post-punk right down to their very grassroots; fanzines, dissatisfaction on the streets, the general cut-and-paste DIY feel of it all. The anarchic force of it all practically springs off the page in an engrossing read; reading it on the bus home every evening ensuing in many near-misses when it came to getting my stop. Rather than being too wrapped in the chronology that can act as a bind for so many books, Worley’s introduction is a mixture of both the concrete politics of the era 1976-1984 era and a look at the youth culture of the preceding, postwar era, seeing how to the two separate eras of history collide to make perfect sense for the groundwork of punk. Rather than just taking the “X was bad, Y got angry” angle got angry on youth protest, Worley sees protest as a much more multi-dimensional thing and as a result, is all the more fascinating for it, covering issues such as the personal within the politcal and the role of the body , in the Julia Kristeva-esque critical fashion that the two are often the same. He is also unafraid to tackle the more unsavoury aspects of his subject – whilst writing heavily on punk and post-punks huge role in fighting against racism and sexism, the moments when it actually sublimated elements collided are handled boldly and eloquently, which isn’t always easy.

Its hard to imagine anybody will write a better book on the era this year, as the whole spirit of protest burns through Worley’s perfectly constructed work, the feelings of dystopia spreading across his prose shot through with a message of optimism through dissent, Derridean deconstruction and Situationist-style conclusions. This is most certainly another book well worth owning, not just for those interested in the punk era but for anyone who cares about politics and protests in general.

All words by Amy Britton. Find more at www.louderthanwar.com/author/amy-britton or via Twitter on @amyjaybrittonProtes