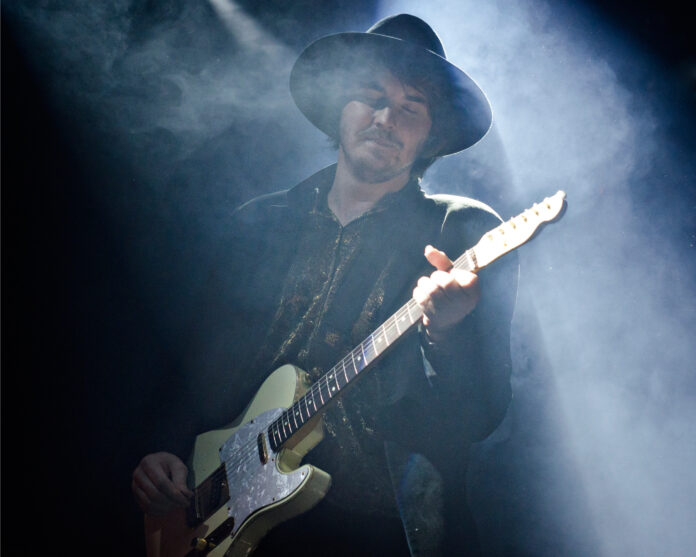 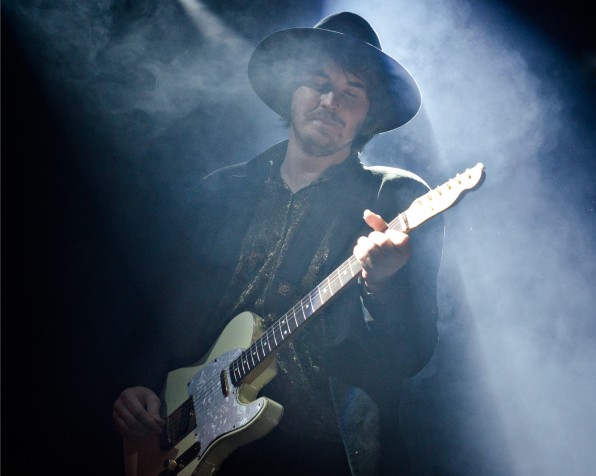 Judging by the amount of requests we’ve had from writers to review this tour, calling it the hottest ticket in town is a huge understatement. Stephen Murphy (words) and Karina Lyburn (photos) were lucky enough to get their requests in earliest and, aided by the fact they were asking to cover the first date, this, therefore, is their combined report.

It’s that time of year again when the NME tour rolls into town, and the sticky floors and walls of Nottingham’s Rock City get ready to bear witness to the best and brightest musical talents the New Musical Express can rustle up. The last couple of years have actually been quite exceptional, with Django Django and Interpol headlining 2013 and 2014 respectively. The question is then, how will tonight’s top turns, Palma Violets, measure up to these past glories?

Before finding out, there’s the not insubstantial matter of three opening acts. 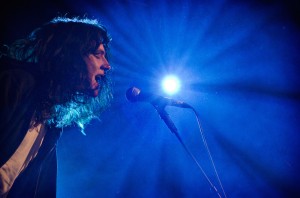 First up, The Wytches.

Parachuted in at the last minute to fill a hole in the tour left by the departure of the seemingly defunct scowly Scots trio, The Amazing Snakeheads, The Wytches find themselves in the opening slot previously held by so many musicians who’ve gone on to find massive success – Franz Ferdinand, Kaiser Chiefs, Florence and the Machine, to name but a few. No pressure then.

Walking on to the Rock City stage accompanied by The Simpsons theme tune, The Wytches immediately show they’re in no mood for funny business by trying to cause irreparable hearing damage to all and sundry. I swear I can see air molecules vibrating violently in front of my very eyes, as the Brighton based trio run the gauntlet of grunge from ‘arghh’ to ‘grrrr’.

With track after track of thunderous alt-rock, each sounding like it’d be very much at home on Nirvana’s debut album, Bleach, it’s clear that the band are talented, but at this stage in their career, perhaps a little too derivative and one dimensional to hit the giddy heights of some of the opening slot acts who’ve gone before them in years gone by. Pretty good, with the potential to be great! 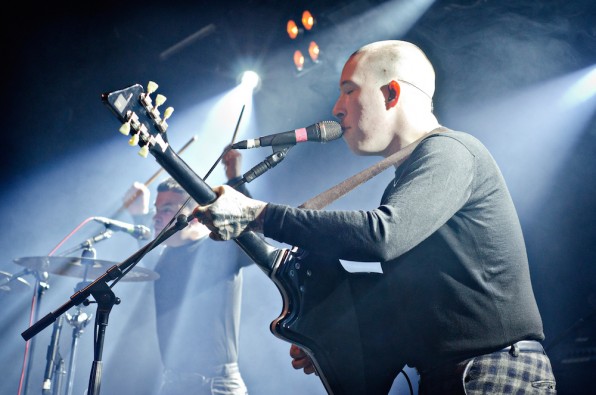 Cheeky chappie Kentish duo, Slaves, are up next, and right from the off they put forward a robust case for why they’re going to be the breakout act of this year’s NME tour.

As well as having the devil’s tunes, Slaves are also blessed with a magnetic stage presence – an eye n’ ear popping mixture of exuberant gurning and Joe Strummer-styled howling, which in combination with the polyester and nylon slacks that guitarist/vocalist Laurie Vincent and drummer/vocalist Isaac Holman are sporting tonight, makes for a truly arresting spectacle.

Highlights of the set are an exuberant Feed the Mantaray and the perfectly rational Sasquatch fear of  Where’s Your Car Debbie?, both of which whip up the Rock City mosh pit into a foaming sea of hormones and spilt lager. 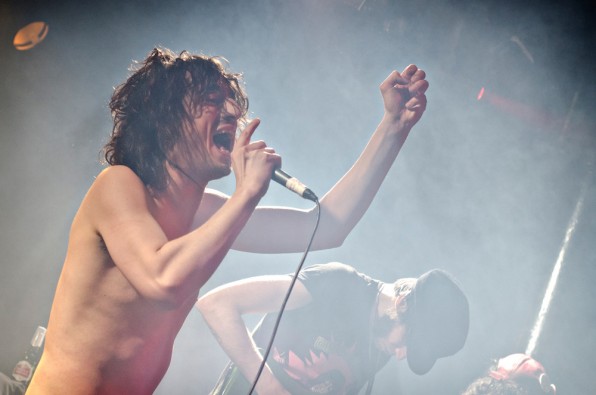 It’s a brave band who follows such a near perfect set, but if there’s anyone who could top it, it’s the ridiculously good, The Fat White Family.

I could be wrong. I may have dozed for a second and imagined the whole thing, but I’m sure tonight’s Fat White offering started with with a random fellow in a military hat singing Cockles and Mussels. Normal service is quickly resumed though, as the band troop out onto the stage and launch into the slinking, sexy bastard that is Auto Neutron.

For the first few minutes of the song, singer Lias Saudi wanders around like an confused old man who’s struggling to locate his car in a full multi-storey car park, but then with a swig of bottled beer, he transforms into a twitching/shrieking mentalist – a mad amalgam of every great front man from the last 50 years, and it’s truly a sight to behold.

Is It Raining In Your Mouth and I Am Mark E Smith raise the stakes and the crowd’s mood even higher, the with latter perhaps an unconsciously insightful comment on the fact that the band are burning through personnel (a new drummer and bassist in less than a year) at a rate The Fall’s famously grumpy, P45-issuing patriarch would be proud of.

It’s the unbridled filth of Touch the Leather, though, that is surely the crown jewel in the bands current setlist – a song that simultaneously appalls and arouses in equal measure and without doubt makes perverts and deviants of all who hear it. Fabulous stuff.

Back in 2013, just prior to the release of their first LP, I had high hopes for Palma Violets. I truly thought their heady mixture of guitars and psychedelic Hammond organ (a kind of Brit-rock-meets-The Monks) was going to change the world, but sadly, it wasn’t to be. Whilst their debut album, 180, wasn’t completely terrible, it did sound in most-part like a binned Libertines demo, and subsequently, they fell from from my radar quicker than a tiny shit down a big toilet on full flush. 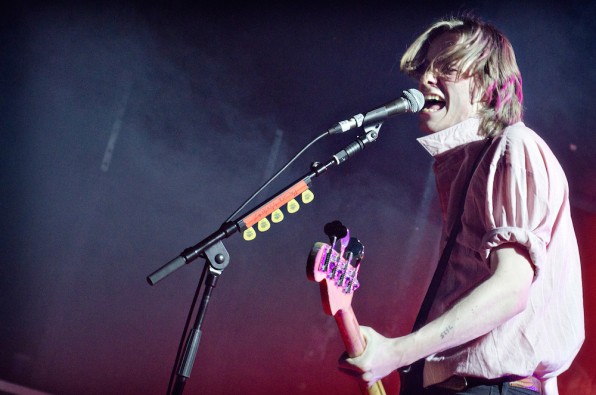 I’m always willing to give people a second chance though, so perhaps tonight’s headline slot might be a good opportunity to pause and re-evaluate my relationship with Palma Violets.

Sadly, from the get go, I’m bored, restless and a little bit annoyed. Perhaps its guitarist Sam Fryer’s fedora hat (you know, like Pete Doherty wears) or the incessant Pete n’ Carl-esque bromantical guitar duelling – but overall it’s because a band who once showed so much promise, now seem content to be Libertine copyists and  churn out lowest common denominator, sing-along-tat. Christ, I haven’t been this dispirited at a gig since I ‘accidentally’ went to see The Courteeners!

I’m clearly in the minority of one though, as the Rock City mosh pit from the first song until the last is as mental as I’ve ever seen it. At one point, a large part of the crowd sit down (think of your jeans for god’s sake!), just so they can leap back up again, like demented jack-in-boxes. Maybe it’s the power of Palma Violets music making them do that, and I’m just plain wrong, but I suspect the power of Red Stripe played a part as well. Whatever it is, them kids is crazy!

As another NME tour ends, the term  ‘mixed bag’ comes to mind, but when an evening’s entertainment contains bands as good as Slaves and Fat White Family, memories of the almost good, the mediocre and the sub-par are easily forgotten. Bring on 2016!