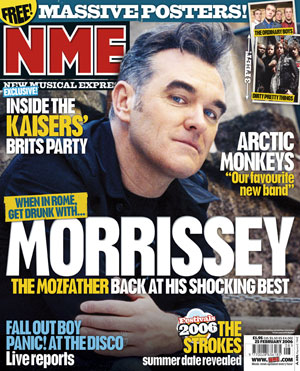 In citing ”ËœFix Up Look Sharp’ as the ninth greatest release since 1952, the NME are making what can be described in the mildest of terms as a massive statement, and are quite knowingly declaring ”ËœFix Up Look Sharp’ as greater than ANY offering from the Beatles, Elvis, Motown, Bob Dylan, and all of the usual suspects and whichever unusual suspects you want to add yourself. Of course, one cannot and should not downplay the significance of ”ËœFix Up Look Sharp’ on breaking the UK grime scene to a new audience and doing great things for British rap ”â€œ but to be seven rungs of the ladder above the list’s first whiff of the Sex Pistols? Even the choice of ”ËœLove Will Tear Us Apart’ as the best song of the last 60 years will certainly raise a few eyebrows, and the idea that ”ËœA Day in the Life’ is the greatest Beatles song and ”ËœWonderwall’ the greatest Oasis song is dubious.

Are these kind of lists ever a wise idea? The wholly subjective nature of music firstly makes such lists redundant, and secondly leaves the list in question either dull or completely disagreeable. Similarly, how does one define ”Ëœgreatness’ anyway, let alone rank those who espouse it? This writer would see it as some sort of vague term to describe the crossover between musical merit and sheer size and impact.

What do you think? Are the NME spot on in their decision? Were they merely putting a cat amongst the pigeons and instigating a debate on the essence of ”Ëœgreatness’? Is the insinuation that anything by Dizzee Rascal is greater than any of Elvis’ seminal records foolish or even downright blasphemy? And if the Beatles were bigger than Jesus”Â¦.where does this leave Dizzee Rascal?