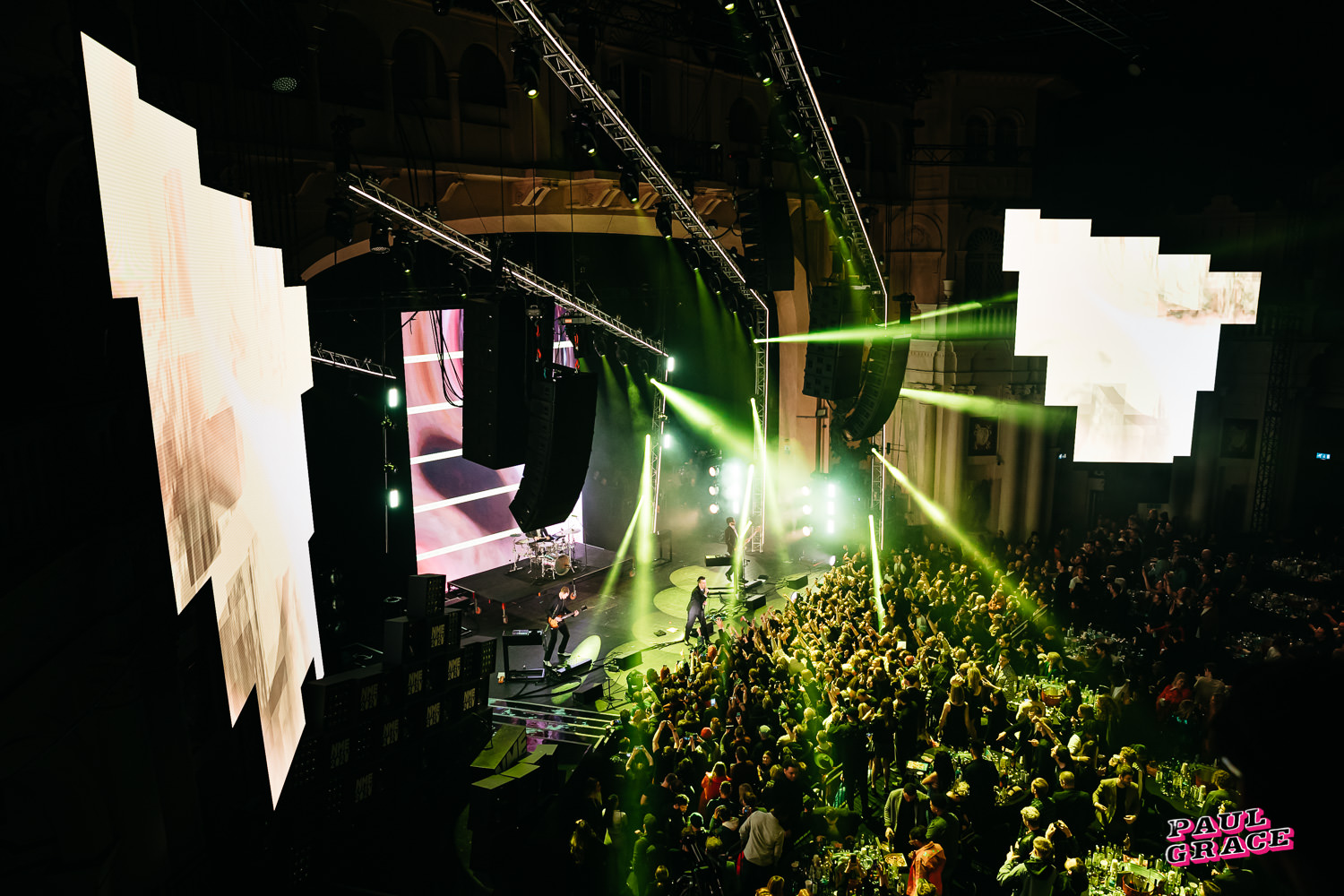 Spirits were high last night at the O2 Brixton Academy for the NME Awards 2020.

The red carpet was burning hot with a guest list that featured a who’s-who of popular contemporary music, including The Cure, Foals, FKA Twigs, Slowthai, Courtney Love, Taylor Swift and The 1975, Robyn and Anna Calvi.

Comedian Katherine Ryan and DJ Julie Adenuga presented the evening which opened with Slowthai and Mura Mura performing their spiky rap-punk-indie collaboration, ‘Deal Wiv it’. During the one song that they played, Slowthai spent more time off the stage than on and enthusiastically sprayed a magnum of champagne over a table of guests. Later picking up the award for ‘Hero Of The Year’, a clearly inebriated Slowthai went on to make sexual comments towards presenter Katherine Ryan. A male member of the audience later called him out for misogyny which resulted in a ruckus that security had to break up.

The Cure picked up Best Festival Headliner, and a visibly humbled Robert Smith accepted the award along with the rest of the band.

Louder Than War favourite Yungblud won the award for Best Music Video for Original Me, and he went on to perform two songs that included copious amounts of stage diving and crowd surfing.

Courtney Love earned the Icon Award and appeared genuinely touched at receiving such a prestigious accolade.

Keith Flint was honoured in a touching speech given by bandmate Leo Crabtree.

It probably came as no surprise that both Best British Festival Award and Best Festival In The World Award went to Glastonbury, the award for which was picked by an ecstatic Michael Eavis. And keeping it in the family, daughter Emily Eavis won the award for Godlike Genius.

FKA Twigs performed a stunning version of Cellophane. She was nominated for four awards but picked up just the one for Best British Solo Act.

Robyn received the award for Songwriter Of The Decade which was presented by Christine and The Queens and Anna Calvi.

Other performances included AJ Tracey who shook the Academy with his bass-heavy urban grooves, while Beabadoobee impressed with her glistening indie-pop sweetness. The evening was closed by The 1975 who played several of their biggest tracks after picking up two awards (Innovation and Best British Band). During their rocking mini-set, Matt Healy made a plea to for us to wake up and care for each other and the environment, and just as their dazzling light-show faded, the night came to an end.

Songwriter Of The Decade – Robyn

Best Band In The World – Slipknot

Best Festival In The World – Glastonbury

Best Music Film – Liam Gallagher, As It Was

Hero Of The year – Slowthai

Villain Of The Year – Piers Morgan