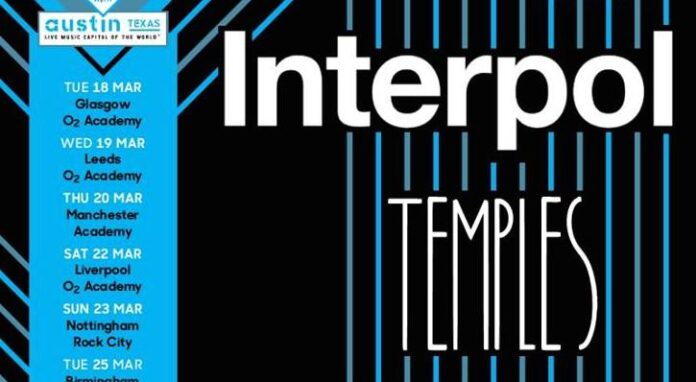 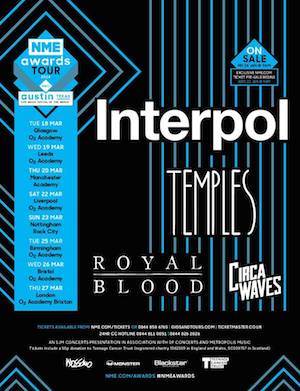 By now legendary, this year’s NME Awards tour took in Birmingham last Thursday bringing with it Interpol, Temples, Royal Blood and Circa Waves. Harley Cassidy was also there for Louder Than War.

The NME Awards have long been the mecca for all indie/alternative followers. Four acts voyage around the UK intent on showing their wares to anyone they can. It’s meant to be a celebration of mostly vibrant and exciting guitar bands with the odd alternative act thrown in. However, the buzz for this year’s event isn’t exactly palpable. It’s perhaps notable too that the venue in particular was downgraded by size and even the Institute isn’t filled to capacity.

Circa Waves are up first; they play nice, derivative indie that only teenagers appreciate or care about. The thing is, the first band slot on any NME tour is infamous for being the slot for the band that will “make it big”. Last year’s firsties were Peace – nuff said. However, whilst Circa Waves draw on influences from The Strokes, their sound and style is nothing we haven’t seen before. It’s nice and polished and doesn’t leave any room for a rough around the edges approach. Some people like nice and safe indie pop which is fair enough but if you crave for some more rock and roll in your life Circa Waves aren’t for you. Some nice tunes though.

Next to take to the stage are Royal Blood and for a duo they pack a mighty, fucking large punch. It’s sexy and snarling and strut-worthy without even trying. Out Of The Black is a menancingly sultry number that grinds down to just enough rollicking riff and skin hitting vivacity to get the crowd jostling. Figure It Out is the stand out track of the night; Mike Kerrs voice channels its best Jack White as he battles between a quiet/loud dynamic that bridges falsetto and blues rock scream into one. It’s no fucking wonder Arctic Monkeys caught onto these lads and grabbed them with both hands. There’s enough head-nodding and mutterings of appreciation from the over 35s in the Institute too to ensure that Royal Blood will pin their demographic and play with it. Yes, you should be standing there with a pint and feeling all rock and roll. I certainly did… or tried to anyway.

Following are Noel Gallagher’s alleged saviours Temples. James Bagshaw is like an ethereal, divine nymph. A toothpick thin figure with lustrous curly locks and a smattering of glitter, he’s the perfect centrepoint of the kaleidoscopic creation that Temples give us. Aside from the raucous disciples three rows back however, no one really seems to be captivated by Temples set. They dust off the psychedelic gems of their debut, Sun Structures, rather nicely, even including b-side Ankh. Keep In The Dark , Mesmerise and Colours To Life are beautifully crafted songs and ooze that original Temples glow of being songs that press all the right, progressive/psychedelic buttons but still retain catchiness and mass appeal. The ornate, baroque tinged touch of Temples’ back catalogue worked well enough with their fans tonight but failed to levitate the rest of the crowd to its shimmering, T.Rex indebted peak. Which is a shame. There’s enough people saying that Temples should be more rock and roll, but why? What’s really the point or need? These people cry for another Marc Bolan but if Bagshaw was to try and imitate Bolan, he might as well stick a sign saying “open target” on his arse and wave it in the air. There’s no winning. All that can be said is that on record, Temples sound magical, but live, Temples sound like Dumbledore casting his spells on his good day.

Finishing off are tonight’s headliners – Interpol. A rather confusing choice for the headline slot. Interpol were part of New York’s early 2000’s post-punk revival and were last seen doing something serious musically about four years ago. This, however, didn’t stop them from bringing the house down on Tuesday. Receiving by far the best crowd reaction and playing a set filled to the brim with career-spanning tunes including PDA and Slow Hands, Paul Banks delivered perfect vocals to a buzzing audience. Whether you’re a fan of Interpol’s music or not, it was hard to fault their performance and workmanship, which at least secured their right as headliners in any case.

–
You can visit the band’s person websites: Interpol, Temples, Royal Blood and Circa Waves