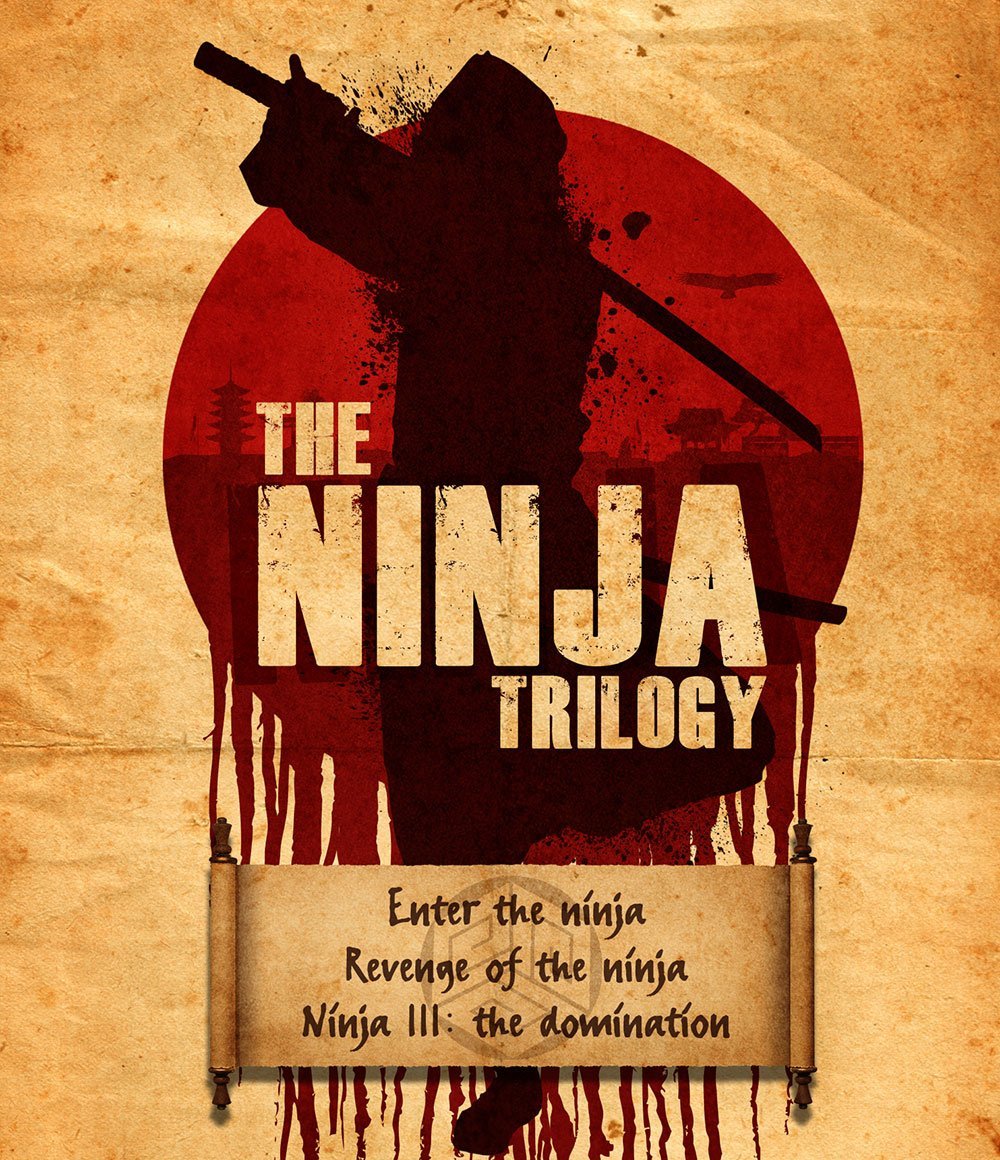 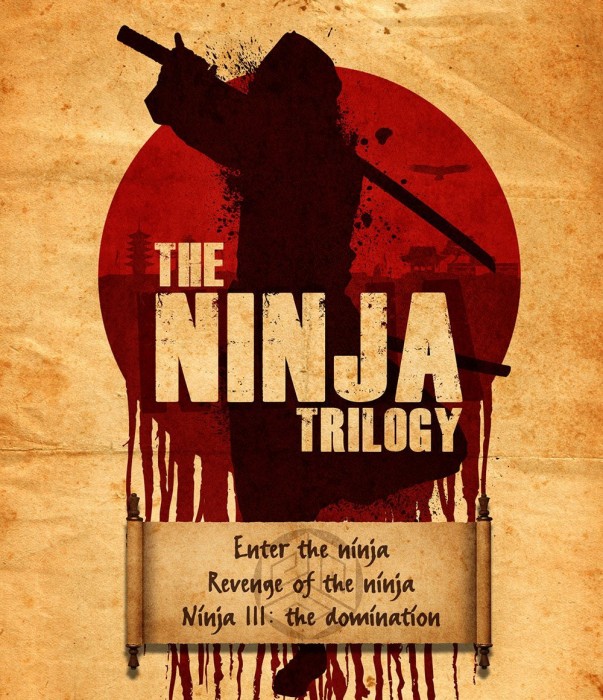 Enter the Ninja helped kickstart the craze for all things ninja in the 1980s and stars Franco Nero, best known as Django, the titular hero of the best spaghetti western not directed by Sergio Leone.

In a tricksy opening sequence that I’m still not sure I entirely understand, Nero’s character Cole passes his final test to be inducted as a ninja master, although one established master, Hasegawa (Shô Kosugi), is unhappy at the idea of an American joining their ranks. Not that Cole should be too concerned, he’s already made the decision to travel to the Philippines immediately to visit his pal Frank Landers (Alex Courtney), who once upon a time rescued him from a certain death when the pair served as mercenaries in Angola, and who now runs a coconut farm near Manila along with his gorgeous wife Mary Ann (Susan George).

Frank’s life though is far from the idyll that it might sound. He is drinking heavily, he’s impotent, drifting apart from Mary Ann and getting increasing hassle from a bunch of heavies employed by villainous industrialist Charles Venarius (Christopher George), one of several characters here who wear white suits – I think Saturday Night Fever must have come late to this part of the world. Oh and I should mention here that when Venarius isn’t attempting to illegally grab oil rich land from the likes of Frank, he enjoys synchronising female swimmers in a pool situated in his swanky headquarters.

It will come as no surprise to learn that Cole’s mastery of ninjutsu is going to come in handy throughout the rest of the film. Okay, when I say Cole, I should mention that Nero does look a bit on the chunky side for a ninja and that a stand-in was obviously used in many of the action sequences and, believe me, there are plenty of those and very enjoyable they are too.

I initially suspected that it would all be downhill after this film but no, Revenge of the Ninja is even more entertaining – the term trilogy here incidentally is used loosely and this isn’t a direct sequel and none of the films have any plot connections although one actor, Shô Kosugi, does feature in all three albeit in different roles.

This time around Kosugi plays a good guy ninja, Cho Osaki, whose family have followed the path of the Japanese warrior for centuries. For reasons never fully explained, a group of rival ninjas brutally slay both his wife and one of his sons (whose life is ended by a ninja shuriken star thrown at his forehead), albeit Cho does get the chance for at least some revenge by killing the murderers. His pal Braden tries to persuade Cho to join him in America with his surviving son Kane (played by Shô’s real life son, also called Kane) and Kane’s grandmother and help him open a new gallery. Cho, though, isn’t so sure.

Kane, despite having to kick the collective asses of some bullying local kids, appears to be enjoying his new surroundings and has even forged a friendship with Braden’s girlfriend, Cathy, played by model turned actress Ashley Ferrare – and on the evidence of her performance here I’m guessing that her modelling career was more successful than her acting one.

It’s through Kane that we discover the real reason for Braden’s desire for Cho to relocate when, unaccompanied in the gallery, he accidentally breaks the head off one of the valuable dolls and white powder spills out. Yes, Braden is selling heroin – imported from Japan and hidden inside the dolls – to a local mob, who although never named we can safely assume are the Mafia.

Several further absurdities follow on including a golden masked ninja Braden taking on the gangsters, Kane’s surprisingly agile granny getting involved in some aggro and a hilarious fight scene in a children’s play area between Cho and a gang who distinctly resemble the Village People (honestly!).

The Cannon Group, the company behind these films, pumped out a legendarily eccentric output of low budget/high octane films but after the ludicrousness of the first two instalments of the trilogy, it’s hard to imagine how the final film could manage to take several further paradigm shifts in storyline silliness but director Sam Firstenberg and screenwriter Dick Desmond somehow managed to pull off the feat.

By 1984 the ninja boom was still big news, in fact, a new comic strip by the name of Teenage Mutant Ninja Turtles was introduced to the world that year. Demonic possession movies were also still popular and so Ninja III: The Domination is like a crazy genre mashup, Enter the Dragon meets Poltergeist but with elements of comedy (intentional and unintentional) and also a romance thrown in for good measure.

Again, the film begins with a long and logic defying action sequence with a ninja crushing a golf ball into dust just before killing a battalion of bodyguards of a wealthy man playing a round of golf (and no, the reason for this is never explained although it emerges that the man was a scientist). The ninja quickly moves on to another killing spree – this time slaughtering some cops called to the crime scene who chase him in cars, on motorbikes and even in a helicopter too. Before dying, he meets briefly with Christie Ryder (Lucinda Dickey), who is fixing some telephone pylons on the course and oblivious to the carnage.

With her shaggy perm and lycra gear, Christie has to be the most 80s girl in the world ever – she teaches aerobics part time and owns an arcade computer game called Bouncer which she keeps in her apartment.

This last detail is important due to the fact that it is through a sword presented to her by the murderous ninja and the Bouncer machine which begins revolving, billowing out smoke and shooting laser beams onto her face that Christie becomes possessed by the spirit of the dead ninja, who now seeks retribution from beyond the grave through Christie against the squad of officers who gunned him down even though her (lack of) martial arts skills make Franco Nero look like Bruce Lee.

And then things get even stranger.

Each of the films is worth a watch if you’re on the lookout for a fun filled ninety or so minutes and if ninjas are your thing or you’re in the mood for some 1980s nostalgia then I’m sure you will especially enjoy this collection.

Extras include commentaries, interviews and trailers and a booklet featuring new writing and archival imagery.

For more on the trilogy visit the official Eureka Masters of Cinema website here.