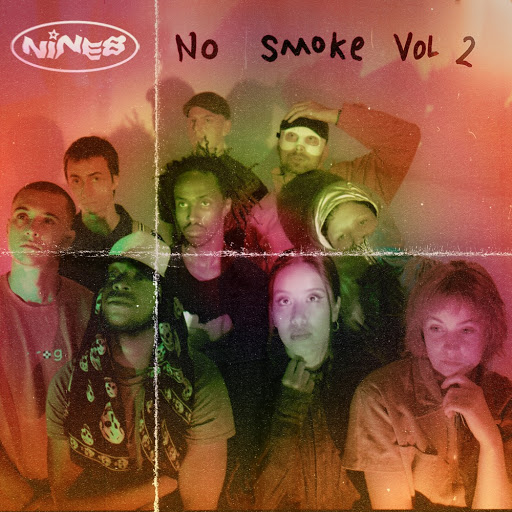 For a Hip-Hop collective who have garnered so much attention through their DIY approach, the worry is that the more successful NiNE8 become, the further they depart from their frankly charming origins. NO SMOKE VOL.II finds them navigating this path, somewhere between raw talent and major label interest. Darker, fuller, and more intense than its predecessor, the record shakes off long instrumentals and candid voice notes in favour of loose beats and aggressive vocal deliveries. It’s streamlined, and it’s bold.

Opening track WARRIORS swirls into life in mysterious fashion, with Lava La Rue calling out to all the “boppers from the big city”. The announcement wouldn’t go amiss over the tannoy system of a dreamscape shopping-centre, setting the early tone for the record. Ghostly voices slide through the background as a myriad of NiNE8 members make their first appearance on the record, including rappers Bone Slim, Nige, and L!baan, softly spoken singer Biig Piig, and rapper/singer Nayana IZ. Here too is Lorenzorsv, whose presence across all 9 tracks is a revelation. Boasting lyrical honesty, simile-laden verses, and memorable hooks aplenty, he is the true star of the record, leaving listeners a little baffled as to why he hasn’t featured more prominently on previous NiNE8 releases. Tonally, lines such as “sometimes I put you down / but you know that I don’t mean it / trying to change just like the seasons” fit perfectly with the melancholy vocals of Biig Piig.

GROWN is perhaps the best example of this, with Piig reciting what could be diary-entries over tentative snares and Nintendo 64-esque synths. This beat comes courtesy of L!baan, who showcases his ability to rap as well as produce throughout the record. Of course, it wouldn’t be a NiNE8 tape without Mac Wetha, and the producer (and recent singer) takes the reigns for singles 079EIGHT and SHEDONTEVENKNOW, the latter being the most developed song on NO SMOKE VOL.II. Distinct synth stabs, a playful chorus, and tales of bottled up feelings make it a standout track. Its upbeat nature contrasts with some of the tape’s creepier moments, namely FUNKTION, and the Kxrn produced 4REAL. Both feature eerie minor melodies and revel in Trap music influences.

Eclectic influences and references reflect NiNE8’s ability to find inspiration anywhere, with lyrical nods to toothpaste, Nardwuar the human serviette, Alexander McQueen, Blackberry curve phones, and even Dennis the Menace littered throughout. This referential melting pot is indicative of the collective’s hometown, London, and of NiNE8 themselves; Each of them contributes a unique perspective.

Their latest effort ends on the unusually violent DO OR DIE, the title of which exemplifies the collective’s determination to succeed against all odds. And succeed they do. While their debut saw them arrive on the London underground scene, NO SMOKE VOL.II establishes them as main players. It’s a clear evolution in sound, and – thankfully – it stays true to the NiNE8 ethos of collaboration, work ethic, and collectivism. For now at least, they are as beguiling as ever.

NO SMOKE VOL.II is out now.