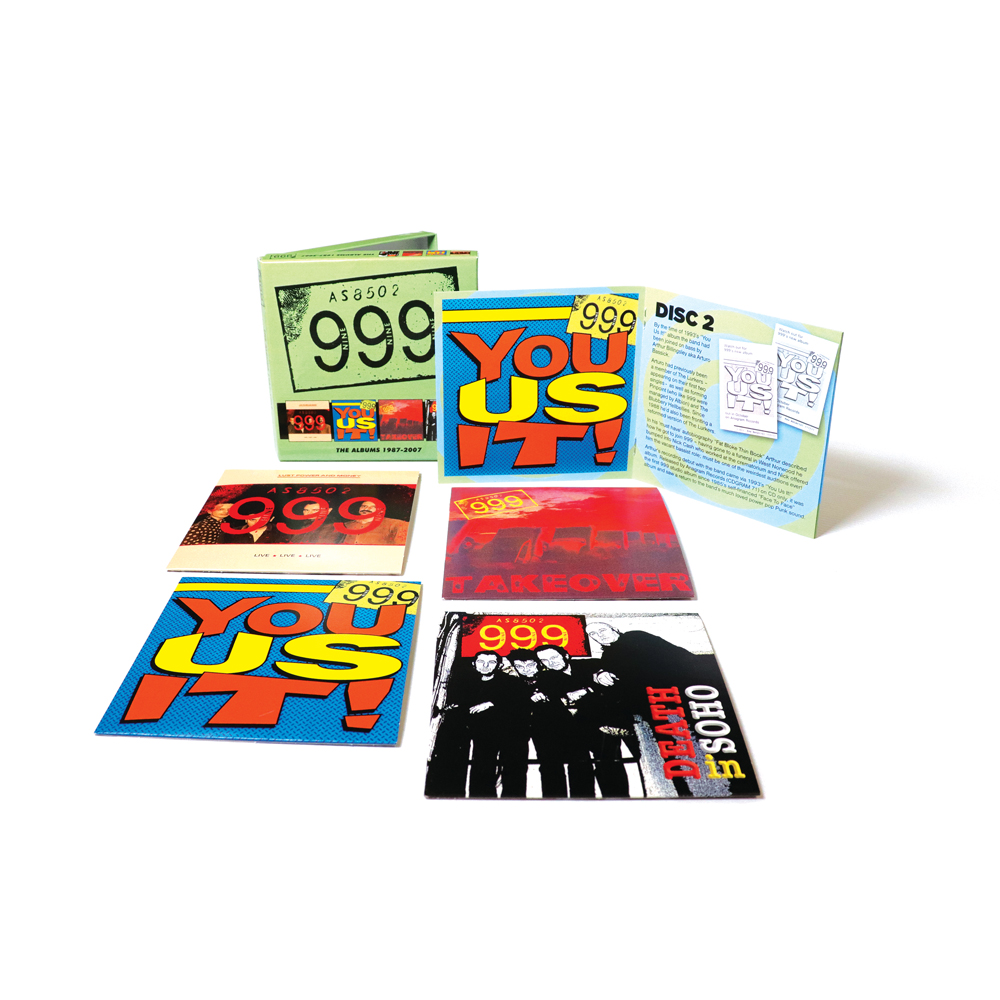 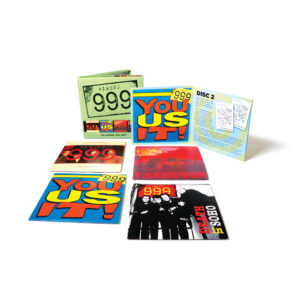 Boxset compiling the four albums by 999 recorded during the twenty year period 1987 to 2007, including their last (up to this point) album, Death In Soho….LTW’s Ian Canty hears what Nick and the boys in the crew got up to in their return to the independent sector…..

I have to admit I was slightly disappointed that this selection does not provide a dovetail with the previous boxset, the pretty all-round excellent Nine Nine Nine – The Albums 1978 to 1980 (reviewed here). It would have been nice to have had Concrete, their epic fail/electropop experiment 13th Floor Madness and 1985’s Face To Face as well, but I suppose a 7 album boxset is a slightly unwieldy prospect. Maybe these records are being grouped together for release at another time?

Anyway although I’ve started looking this collection with the slightly negative view of what isn’t there, let us approach this in a more positive frame of mind and examine what is actually included. Now it would be a bit of a stretch to say that the three studio albums here rival the band at their very prime, but they always were seasoned, talented musicians and more often than not put together some interesting and addictive sounds. Fair play to them for not totally relying on their old material, even if four LPs in 20 years does rather point to having to concentrate on other interests for a large part of the time.

Before looking at their studio adventures, first we have a live offering from 1987 entitled Lust, Power and Money. By this time original bass player Jon Watson had been replaced by Danny Palmer, but everyone else was still present and correct and the enviable live reputation the band had carved out in the late 70s was more or less intact too. The band were caught here at Psychobilly venue the Klub Foot (at the Clarendon in Hammersmith) and it certainly appears that a good time was had. This set has been issued a few times over the years and a visual record was also available on the Video/DVD called Feelin’ Alright With Crew.

It’s a strong showing that cherry picks the UA/Polydor/Albion glory years, but the main points of interest for fans are the three songs that 999 never put down in the studio. Of these my pick is White Trash, excellent contributions from Guy Days on this one (now he’s an underrated guitarist), a jangly, edgy piece of superior Pop Punk. The title track Lust Power And Money isn’t far behind either, a great singalong, with only On The Line being a bit ordinary. This marks out why it wasn’t recorded for an LP, but the other two could have comfortably slotted in on any of the other albums here. Of course you gets the classics like Homicide, Emergency and Nasty Nasty as well, before an ending headlong rush of My Street Stinks, Titanic Reaction And I’m Alive (the last two the only bonus tracks on the boxset, being outtakes from the same concert). A good live showing, albeit 10 years removed from their 1977 glory days, proving they still were a band to be reckoned with on stage.

It would be another 6 years before 999 graced the racks again with Lets Face It and that a full 8 after their last studio album Face To Face in 1985. By this time Palmer had left and been replaced by Arturo Bassick of the Lurkers and this would put in place the line up that has sustained right up to now. Having this consistency of membership set them apart from the bewildering revolving door policy of most older Punks bands and certainly helped fine tune their already abundant musical abilities. That is clearly discernible already on this LP, where they sound purposeful, direct and meaty.

Here the band settle back into a rough and ready style which evoked their classic 77-81 period, something which marks all the studio albums here to varying degrees. It starts out strongly with Black Flowers For The Bride, which comes fitted out with a nifty chorus that would embed it in the 999 live set to this day. This one could have quite comfortably lined up on The Biggest Prize In Sport and helps set out their stall somewhere between riffy Power Pop and Punky R&B. The points of concern are an occasional rather brittle sound to the drums and the odd throwaway track that goes nowhere (All Of The Days didn’t do a lot for me).

Nick Cash’s R&B/Pub Rock roots are used to good effect on Bye Bye Bones and Deep In The Shadow and the band were still up for old-fashioned Punk tear ups like It’s Over Now and Big Fast Car. Though for me the best is the more subtle Don’t Tell Me, riffy and exciting Power Pop – a concoction fit to stand next to their classics. White Light, which finishes the LP, seems like Inside Out Part Two, but as that was a good ‘un I’m not going to complain.

Weighing all things up, Let’s Face It is a pretty decent showing for a Punk comeback album recorded in 1993. While there’s nothing here that would supplant Emergency, Nasty Nasty or Feelin’ Alright With The Crew in the band’s live setlist, there is more than enough items that pass muster. The LP didn’t make much of an impact, but I would judge that more to do with Punk’s lowly position in the early 90s pecking order rather than any real failings on the band’s part.

Again there was a long gap before any new 999 product and 5 years elapsed before the band issued Takeover on the Italian based label Get Back. I can only guess that they handle their recorded legacy with care, not wanting to just put out any old stuff to keep the band rolling. This set more or less dispenses with the Punkier outbursts of the last LP and is much more in a mid-paced Pop/Rock fashion, closer to The Biggest Prize in Sport and Concrete in sound rather than their 1978 material.

Things start encouragingly enough with the title track, which has a late 60s Pop feel and seems to owe something to R Dean Taylor’s There’s A Ghost In My House in its melody. Takeover the song comes fitted with an agreeably hammered-home chorus though, it’s a goodie as is the next track Didn’t Mean To, a smart edgy New Wave piece. Most of the rest of the record is decent but not particularly memorable. Some exceptions are Damp With Tears, which has some wizard chunky guitar and a neatly structed and winning hook-line, plus the really catchy Split Personality and Really Like You (the only one on this record to regularly feature in the band’s live set for many years).

The band delve back into their early years for the Punky Jam Me Up (which was in their live set as far back as 1980) and it has to be said that Pile Up presents a good end for the LP. A simple but winning chorus is added to more excellent guitar playing. Though Takeover does have its good points, for me it is the weakest album of the set. There just doesn’t seem to be the same the drive of Let’s Face It or Death In Soho and it does rather sag in the middle, before picking up again on the second half of the record.

Talking of big breaks between LPs, the record for 999 was set by Death In Soho which appeared on Overground Records in 2007, nearly a full decade after Takeover. A real return to form, being what I consider their best since their heyday, it brings this boxset to a nice close. Perhaps it makes one slightly rueful though, in the knowledge that the band have yet to follow it up. It’s wonderful stuff on the whole, from the tough and freewheeling Gimme The World right up to and including the final track Bomb You, a pure blast of Punk Pop vim. Guys Days is on top form, whether throwing jagged riffing into The System, Garagey R&B shapes on Get Off The Phone (Not the Thunders song) or imbuing Stealing Beauty with a Buzzcocks/Boys Power Punk sheen.

Last Breath is typical 999 dumb fun, but the restrained and mature The Avenue shows they could still cut it in any competition, it would have made a great single. The production fills the band with a mighty thump and Nick’s on top form too, squealing, shouting and occasionally even singing. It’s great stuff.

This boxset is light on bonus tracks (there surely must have been something tucked away in the archive somewhere) and the main point of interest for die-hard fans of the band would be the live LP, with the trio of tunes that only saw the light of day on Lust, Power And Money and the two outtakes being the carrot. The three studio albums have their good points, with Death In Soho in particular being great stuff – if you enjoyed the first 4 Nine Nine Nine LPs you will probably find the majority of these three records pleasing.

Beginners to the band would be better directed to the previous boxset, but 999 never really lost their winning touch with a tune and all three studio offerings are at the very least enjoyable to listen to. 999 were never going to replicate their 1978 brush with the charts with these records, things had moved on, but they were still more then capable of putting out interesting, catchy and tuneful records. The Albums 1987-2007 is a worthwhile collection and a prime example of their enduring craftsmanship, despite their relatively sparse recording career.