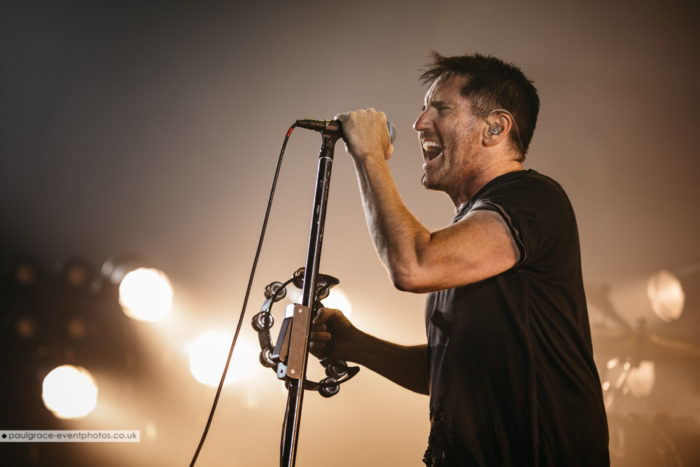 Nine Inch Nails take over the Royal Albert Hall for a post-industrial showdown of earth-shattering proportions. Paul Grace witnessed the apocalypse and reported for Louder Than War.

Nine Inch Nails are in the UK fresh from the release of latest record, Bad Witch. The final part of a trilogy, the first of which dates back to 2016, the new songs have been informed by Trent Reznor’s anguish over the dire state of contemporary American society. He recently told The Guardian, “I think you’re seeing the fall of the empire of America in real time, before your eyes; the internet has eroded the fabric of decency in our civilisation.” It’s no surprise then that the new material sees Nine Inch Nails go faster, harder, darker…

The first time I visited the Royal Albert Hall was in the 80’s to see my Dad singing in the “1,000 Welsh Voices” choir. I remember being bored to tears by the show (hey, I was a moody teenage goth!), but super impressed by the opulent space nonetheless. Tonight couldn’t be more of a juxtapose as the prestigious hall plays host to Nine Inch Nails’ infamous sensory assault.

Kicking off are Back Moth Super Rainbow who play a solid set of experimental electronica with a splattering of moody beats.

At 9pm the stage fills with dry ice, house lights dip, and the circular room erupts with deafening screams. From the off the performance is exhilarating; Reznor, dressed in trademark distressed leather jacket, black jeans and combat boots, looks like he’s just rolled in from World War III. 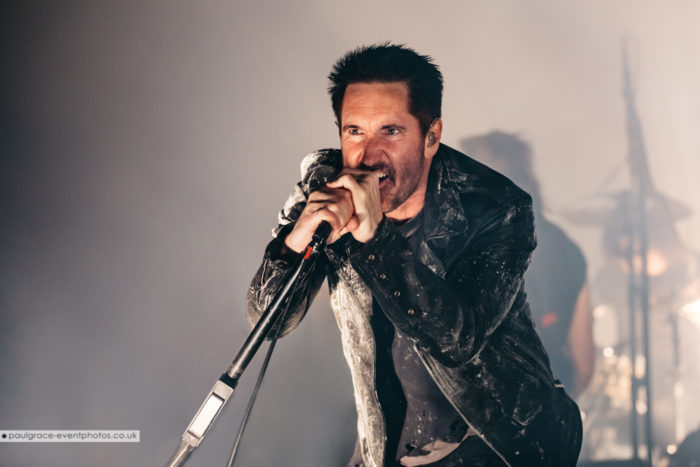 Screeching to the converted, Reznor has a serious chip on his shoulder. He yells his words like life depends on it, and classics like 1990’s Head Like A Hole, are given new context as they’re delivered with fresh passion. Never have his lyrics sounded more relevant in today’s Donald Trump era (“I’d rather die, than give you control”). Here’s a man who’s trying his damnedest to break down these walls and unleash a sonic tsunami onto the world in an attempt to make us wake up and listen. He announces, “All the songs on the new album are fucking fast!”. No shit! God Break Down The Door is typical of the muscular aural onslaught, with a frenzy of twisted breakbeats, resonant acid squeals, and surreal lounge-style crooner vocal. The anger reaches fever pitch with a distortion-ridden Ahead Of Ourselves, and we’re offered a moment of brief respite during a spine-tingling rendition of Bowie’s I Can’t Give Everything Away, with gorgeous arpeggiated keys and a softer vocal.

From my seat opposite the stage, the set is a stunning vision of the apocalypse. Thick plumes of smoke, lightning strobes and blinding spotlights cast menacing shadows onto an enormous white curtain, behind which the Albert Hall’s grand organ looms. At times, as the lighting washes through orange and red, the hall resembles a raging fire, a visual representation, no doubt, of Reznor’s yearning desire to reduce our toxic society to smouldering ashes. 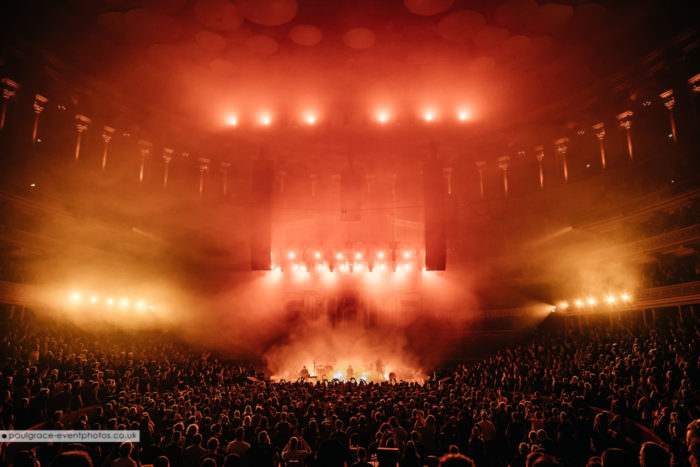 An emotional version of Hurt closes the show and we’re quite literally left speechless. Strong contender for personal favourite gig of the year, this is subversive art at its most avant-garde. Like a fine wine, Reznor is clearing maturing wonderfully; more creativity, more passion, and much more anger. We came, we saw…they conquered.