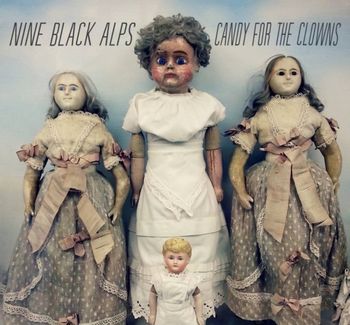 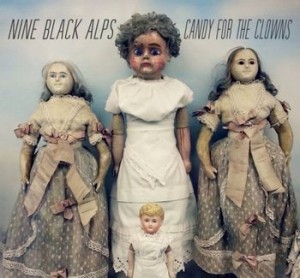 Candy For The Clowns sees Nine Black Alps back to their best. Alana Turk enjoys the band’s return to form.

Alas, you can be forgiven for losing track of Manchester based band Nine Black Alps since their impressive emergence with debut album Everything Is back in 2005. Some vigor seemed to have been lost during the fallow period of Love/Hate (2007) and Locked Out From The Inside (2009). Signs of life flickered once again throughout the middling effort that was Sirens, arriving in 2012. Now returning with their fifth studio album, Candy For The Clowns, it seems that the band have finally regained the passion that made their debut so triumphant.

Recent single Novokaine acts as the album’s punch to the stomach opener. Screeching, distorted guitars thunder into earshot and gravelly vocals make for a rockier affair. The bass and drum beat pummel along in unison, creating a sense of organised chaos. The song provides a heavy yet refreshing sound that harks back to the band’s earlier works.

The melodic guitars and crashing percussion of current single, Supermarket Clothes, make for a poppier, more upbeat and catchy number, which boasts a sense of fresh, youthful energy. Patti adds another electrocuting slice of grunge to the mix. The track is given extra depth and substance with the use of a whammy bar on lingering notes and dramatic stops and starts.

A dirty, distorted bass line introduces Something Else – a melting pot of punk, rock and pop broiled into one concoction. It proves to be a wild, addictive caterwaul of a song, utilising poetic lyrics, rhythmic guitars and compelling drums to make it much more engaging. Morning After takes a shift down in tempo and is more subtle in its approach than other tracks. Frontman Sam Forrest’s vocals are showcased well against the atmospheric and fiddly guitars in the background. Raucous drum rolls and heavier droning riffs add some bluesy mannerisms and a sense of darkness throughout the chorus.

Particularly heartfelt and humane vocals are present during Take Me Underground, a slower number which is soft, skilfully melodic and reposed. Brilliantly atmospheric guitars and the tracks simple, yet effective, two note bounce are enough to warrant it repeated plays. Album closer Clown is a heavy, gritty unusual blend with more catchy riffs and meaningful lyrics. It is an energised, agitated and engaging ending which proves to be simple, but very effective.

Candy For The Clowns encompasses all things sinister and serene throughout its audio journey. The band have cleverly secured a release of angst and anger whilst managing to retain a sense of precious melody; the eye of the storm, if you will. Nine Black Alps have maintained some of their original and distinctive sound, upheld by a tighter and more dynamic style. With this renewed attention, here’s hoping that the band will finally get the rewards that were expected for them after the release of their glorious debut.

Nine Black Alps can be followed on Facebook and Twitter, or keep up to date with the latest news via their official webpage here.