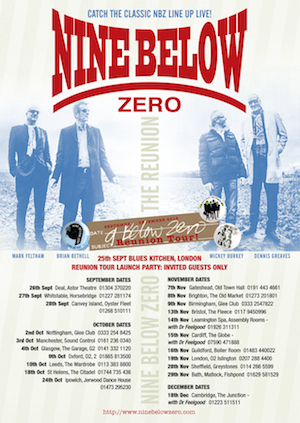 R and B legends Nine Below Zero will be touring the UK this autumn with their classic line-up reunited to celebrate the band’s 35th anniversary. The line-up features Dennis Greaves on guitar and vocals, Mark Feltham on harmonica, Brian Bethell on bass and Mickey Burkey on drums. The band will be playing tracks from Live at the Marquee, Don’t Point Your Finger and Third Degree in venues up and down the country.

Nine Below Zero released their first album, Live at the Marquee, in 1980 and rapidly became one of the hottest live acts on the circuit. Their audience comprised representatives from all sides of the tribal music scene at the time as fans of metal, mod revival and punk all found plenty to attract them in the sound and energy the band produced. They went on to regular support slots with the likes of The Kinks, The Who and The Police and won a host of new followers.

Thousands of fans witnessed Nine Below Zero on their support slot to The Stranglers earlier this year, as well as in the frequent quality assured live shows they routinely turn in. The band are certainly experiencing a renaissance and in Dennis Greaves possess one of the finest guitarist around. Add in the pure genius of Mark Feltham’s harmonica and the rock solid rhythm section of Bethell and Burkey and it promises to be a fantastic night.

The tour kicks off with a reunion launch party for invited guests at The Blues Kitchen London on Thursday September 25th and the band are on the road until December.