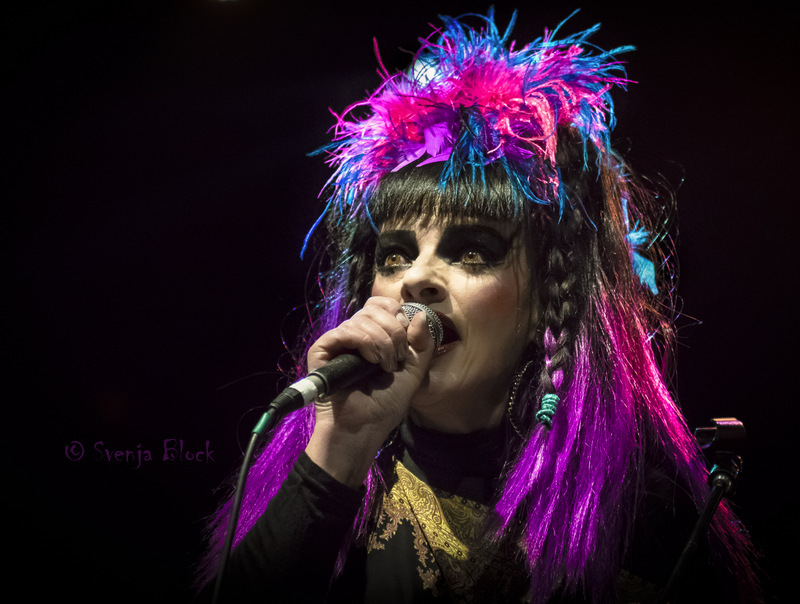 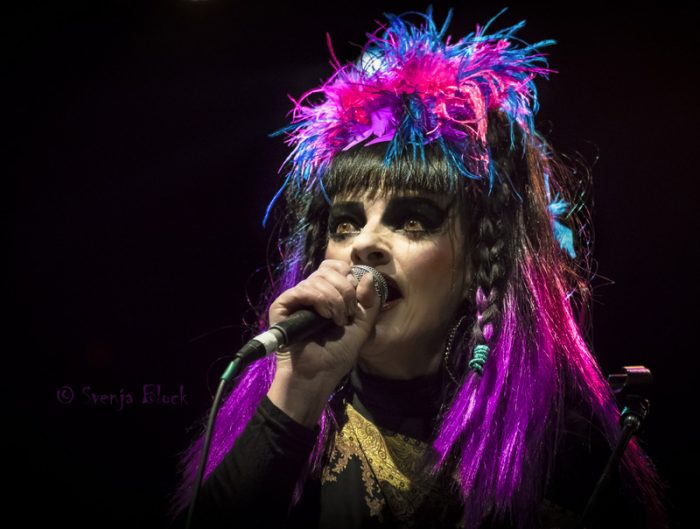 Nina Hagen returned to London for the first time in 14 years with a special 45th anniversary gig. Photographer Svenja Block went along to take part in the celebrations on a balmy autumn Saturday night.

How does one describe Nina Hagen to someone who by chance has never seen or heard of her before? A larger than life personality? A flamboyant diva? Enfant terrible? Outspoken animal and human rights activist? Or singer/songwriter, published book author, actress, and mother? Nina Hagen ticks all boxes… (including those that are yet to be categorised). A propos mother…why not just start by introducing her as the godmother of Punk with a heart that is filled with love, emotion, consideration, and determination.

Unsurprisingly, the O2 Shepherds Bush Empire was packed with a like-minded audience of all ages and to my pleasant surprise a lot of young interested people among the first generation punks and the many dedicated supporters and friends. Always good to have diversity. 3step Cyberbilly Sonny Eriksson took to the stage as the only direct support act and I wonder how many skilled eyes were quick enough to note that it was in fact the electronic dance music wizard Adamski’s alter ego entertaining an anticipating and buzzing crowd with a taster of his current one man show project.

And then it was finally Catharina Hagen time: There was drama, there were stories that had to be told, political correctness quite rightly thought out loud, songs that were started and abandoned with Nina hissing at one of her fellow musicians – “Da fehlt ‘ne ganze Strophe!” (there’s a whole verse missing!).

But first things first. Nina Hagen entered the stage with her acoustic guitar, decked out in leopard print leggings, a matching long poncho like top, and sporting black hair that was finished off with multi-coloured headgear. She sat herself down on a stool and launched straight into ‘Wam Bam Jam’, followed by ‘Sister Rosetta’. We listened to ‘Jesus is a friend’ and his ‘Lord’s Prayer’, were treated to ‘Hava Ska’ and ‘a bit of ‘African Reggae’. There was of course a full live band sharing the stage with Nina that complimented the gospel and energetic rockabilly vibe that was spreading across the venue by now. If anyone was expecting a punk n’rock n’roll kind of greatest hits singles live set a la ‘Du hast den Farbfilm vergessen’, or ‘New York/N.Y.’, any replays of the legendary albums ‘Unbehagen’ or ‘NunMonkSexRock’…well, that was not on the agenda and definitely not happening. However, it perfectly showcased Nina’s fine talent as a stand-up comedian once more and impressively demonstrated her theatrical vocal abilities as both a live and recording artist.

The most anticipated special guest of the night was Lene Lovich, who was welcomed to an incredibly warm and rapturous applause. Those two ladies have been sharing a special bond and friendship that has seen them through the decades. The mutual love, quirkiness, high energy, and delicate intimacy could be felt and heard through the undoubtedly very carefully chosen songs they performed together. Simply delightful and utterly mesmerising!
Perhaps the most surprising song of the night was a cover of Rammstein’s 1996 original single release ‘Seemann’, potent material that Finnish cello/ metal/ rockers Apocalyptica recorded their very own version of with Nina Hagen solo on vocals in 2003. Lene’s and Nina’s choice sounded intense, dark, captivating and certainly highly dramatic. As a big personal supporter of Rammstein, I dare to admit that this version was clearly in the same league as the Berlin band’s own. Lene Lovich’s pronunciation of the German text was excellent; the sound engineer appeared to be suffering from hearing problems though – there can be no other logical explanation as to why her vocals were kept way too low.

The classic 1986 Lene & Nina release ‘Don’t kill the animals’ followed by a spirited version of ‘Alabama’ which had the audience singing along and wanting for more. Notoriously made famous by The Doors, this masterpiece of music was not written by the psychedelic blues rockers but German writer Elisabeth Hauptmann back in 1925 for Bertolt Brecht. What a brilliant and appropriate choice!

We were all sad to see Lene wave her emotional goodbyes but very pleased to hear that the Lene Lovich Band will be playing her first album in its entirety as a one off gig at Cargo in London 18 October 2016. The African-American Civil Rights movement anthem ‘We shall overcome’ was dedicated and referenced to the tragic Paris attacks November 2015. And yes, there was something else that Nina felt needed addressing to the listening world inside and outside The Shepherds Bush Empire: The right to freedom of expression. Right now, women of the Muslim Faith choosing to wear a burkini are being denied that freedom and attacked. It is no one’s business what a woman chooses to wear. Never.

Nina Hagen also offered a unique solution to de-escalate this situation by declaring to “just shut up and dance!”
Bravo Nina! One time collaborateur and friend Adamski returned to the stage for the encore but this time sans an alias for a killer version of his and musician Seal’s 1990 worldwide hit – you name it – ‘Killer’. Gone was the fancy Sonny Eriksson outfit, out came the baseball cap again.

Always expect the unexpected with Nina Hagen. Her way or no way? No, just Nina’s way. We know the hits and the good memories we have of them, maybe there will be another time and place for a separate Nina Hagen themed Best Of show. I’m all for moving forward and growing artistically and spiritually.