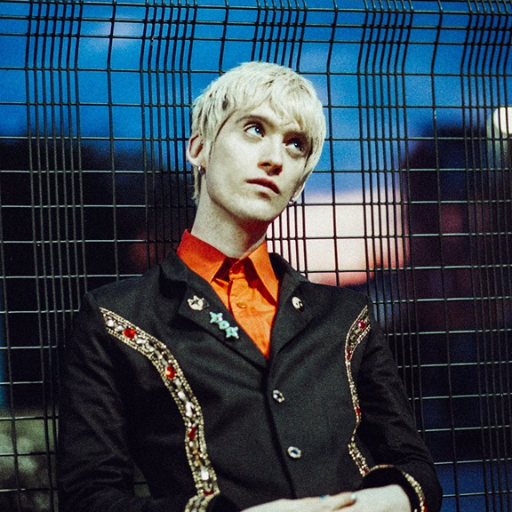 Nile Marr. Mancunian, formed around solid musical pedigree. Also well travelled, with a wealth of experience entirely of his own making. With Man Made he garnered critical acclaim and made a name for himself as one of the most fun and exciting performers around. He took off on a world tour with Hans Zimmer, as a guitarist in his band, playing to sell out crowds at some of the most famous venues on Earth. Now he’s back in Manchester, with a thing or two to say.

We chat about where he is up to at the moment, what he’s been doing and where he is headed next. We sat below the venue, in the basement, that was a great spot. Quiet enough to be listened to without shouting over others, open enough to make the atmosphere a comfortable one. Not altogether dissimilar from Nile himself, it turned out . . .

Louder Than War: Hi Nile. So, any update on your next album release ‘Are You Happy Now’ ?

Nile Marr: No official date yet. We want to get our new songs together and play them to a crowd were comfortable with and like. As it is right now, we’re focused on our music as live entertainment. It’s nice to see people’s reactions to hearing new songs live first, as opposed to itunes or spotify, or whatever. It’s exciting for us to show them what we’ve worked on. We’re really happy where we are now, with loads of gigs lined up for the rest of the year. I honestly love playing live. the audience are my absolute fucking heroes! So much in society now is geared for you not to leave the house: your phone, Netflix, Amazon; but people still do and that’s incredible to me. In the face of all of it, they want to see live music. That’s magic, for me. To answer, there’s no rush for the next record, but I’d say the next recording should be ready for release by the end of this year, or early next year.

Do you think it’s hard for artists and groups to make a living from music, today?

The ceiling is lower now. More people and acts have a share of the scene and publicity. Of course, it’s a tough industry, but like most stuff in life it’s as tough as you make it. There isn’t endless money being thrown at kids now. You have to be savvy and together, too. If you’re lucky enough to get a deal and an advance, then plan. If one or more of you drives, get a van. Spend wisely and invest. Most of my mates who play are incredibly responsible. They’ve had to be. From record labels’ perspectives why waste your money on those who aren’t serious – pragmatic to be fair, I’m not saying bands weren’t serious years ago. Bands are on their own, largely. A deal is to do with recording costs and distribution. You have to do the rest yourselves. Bands and artists get paid less, so there’s even more need to invest in yourselves. With local live-music venues closing more and more it isn’t getting any easier. I feel for independent musicians who can’t make a living. The seriously determined ones will probably find a way though.

How do you usually approach song-writing, as an individual or collaboratively?

When I came back from my tour with the Hans Zimmer Orchestra, that totally took a year of my life, I moved back to Manchester, after deciding to. I’d been all around the world, but Manchester is truly great. I’d not written my own songs for a year or more, so I just wanted to churn out a record. I wrote on my own, for around six months. The stuff in the future we’ll see. I’m lucky that I tend to write quite a lot of of songs, which I’m grateful for. I’m not really precious about it and don’t have set methods. I’m open to new ideas. I think you have to be. Whatever works at the time, for whatever it is you want to do.

How was touring with Hans Zimmer?

It was amazing. As a young person having someone believe in you that much is incredible. Every night I got to play songs I love, with a band that I love. Behind that band are the best orchestra in the world. Behind them are the best choir in the world. I came back knowing what it’s like to play huge venues. I learned different guitar techniques, from some of the very best. The bar could not be higher, so you have to be on your game. That’s why when I got back, I was keen to play venues like Night and Day and apply what I’d learnt. The work ethic and the discipline of the people I worked with was phenomenal, and very humbling. I felt after that that I could start to make music exist with a sound that doesn’t already.

Would you say travelling has had a lasting impact on you and your music?

I got to go to some of the greatest cities on the planet. In everyone of them, Manchester – me being from there – was known and respected as a place. That’s mind-blowing. It really is. Not only are we a tiny island in the northern hemisphere, but a tiny part of that tiny island, and any fan of music, worldwide, knows Manchester and the Mancunian association with music. Unbelievable. Mancunians have musical currency all around the world. For the first time in my life I missed Manchester, genuinely. It’s like no other place in the world. So yeah, I sort of realised that where I’m from is special. It made me proud of all the bands from Manchester, all the ones doing it now.

Whilst you were with Hans and the Orchestra did you get to play on any other instruments, that weren’t your usual guitars?

I got to learn some flamenco guitar and played a bit of banjo. My version and my way, though. So, Indy-style flamenco. I learned that I will always sound like myself, even if I’m playing stuff someone else has write. After a while, you can’t not, which is a good thing. I think something I learnt from Hans Zimmer is how I think he sees people – as instruments themselves. I learnt that I’m a specific sound and others are too.

How involved are you with your own marketing and promotion?

Getting back to what I was saying earlier, you have to play a massive part in every aspect, today. As annoying as you might find some bits, tough. I would love to not have to do certain things, but I have to, if I want things to happen. We don’t live in that world. That getting to wander around a little bit stoned all the time, and have others worry about everything else, the boring bits, getting to just turn up and play on stage, is a luxury reserved for the very few. You have to fight for everything. Even those who do get that didn’t get it at the beginning.

Any albums you listen to week in and week out, or what have you heard lately that’s excited you?

You forget what you listen to. It’s easier to listen to stuff now, just click your phone. I think you pay less attention though because of that. There’s so much stuff coming at you, all the time. A south London band, called Wooze. Like Human league, Gary Numan. The few tracks I’ve heard I’ve been well impressed by. Not sure how they are live, though. There’s lots of music I like that’s not on Spotify. I don’t mean to sound elitist or a wanker, it just isn’t. A Nottingham band, Kagool, truly our favourite guitar band. They opened for us on the first show. And then, just like listening to all the Talking Heads back catalogue. When I’m gigging it’s hard to have so much music in your head, because you’re focused on your set and own stuff. A music app called Shazam is incredible, for findings who sings songs. The best app ever invented. Sometimes I stick the radio on, if in America, and am pleasantly surprised. I can find out who it is. I’ve discovered so many bands using it.

Any Festivals this year?

We’re doing Dot to Dot festival. For now, that’s it that we can announce. Our energy is going to gigs like tonight, mainly. Just keeping up practising, building a fan base and engaging with them and taking it from there, really.

Finally, Nile, any last words for bands starting out.

Never trust anyone who says they know what they’re doing or that such and such a way is what to do. Especially anyone who asks you to trust them. That’s a grade A shyster alarm. I’ve bene ripped off. There are songs I don’t own the rights to anymore and never got paid for –but they were never released. Happens a lot. It’s a drag, but I just thought fuck it, and wrote a load more. What else can you do, really? As for there being ways to succeed, even really successful people in music aren’t 100% sure how they got there. They just went for it, maybe got some luck along the way. But they put themselves out there and worked hard. Truly though, the only thing I can genuinely offer is this: write songs, always. As long as you’re doing that then everything else will be fine for you. Even if you think they’re shit. Finish songs too, follow through on your ideas so you at least end with a product. Discuss them afterwards and try and change or improve them. Oh, don’t listen too much to anyone, including me, about what’s the best way to do anything.

All words by Benjamin Francis Cassidy. For more of his work, visit his author profile.