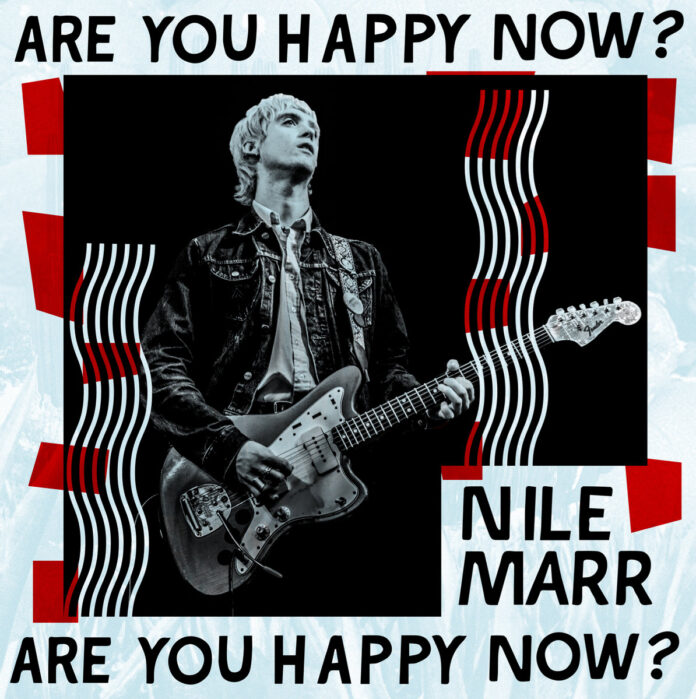 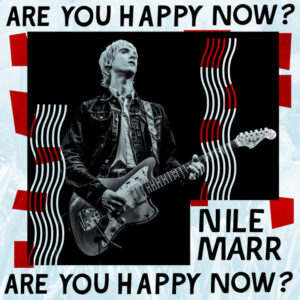 Are You Happy Now

Nile Marr will be a familiar name to Louder Than War readers and should need no introduction.

We’ve spoken many times, from the early days of Man Made, through to the recent Still Hearts EP. November saw the eagerly awaited release of the Are You Happy Now? album which Nile has dedicated to the people of Manchester.

It was only right we caught up again, with Iain Key putting a variety of questions to one of our hometown heroes

Nile, are you happy now?

All things considered, I’d say as a default I’m a pretty happy guy.

Over the last 18 months you’ve released a few singles and an EP, Part Time Girl, Teenage Kisses, Still Hearts as well as the title track. Was the idea always to build towards an album?

Yeah, this was all leading to the full record. I wanted to get it out even when we couldn’t do shows this year. If we’d have waited any longer I just don’t think the songs would have made sense to me.

Oldham Street Records is your own label, what’s led to this?

Yeah, me and a buddy built a studio there and figured we should start a label. Given how London-centric the music industry has become again. There are so many good bands that would never be given the encouragement or given the time to make records, simply because they’re in Manchester, so I wanted to change that. If we’re all fucked, I’d rather us all be fucked together.

Are you aware the running order on the album sleeve is different than on the actual vinyl. (Are You Happy Now’ is actually part way through Side 1?)

Yeah, the factory went with an old version of the artwork. You just can’t get the help these days. Who knows, maybe these versions will be collectable one day?

Although it’s 4 years since the Man Made album this record is still recognisably you. Do you see it as a natural progression?

I mean, I wrote all the Man Made songs, so it’s the same approach here. You’ve got the same guy singing and playing guitar, you’ve got the same guy on bass and it’s still indie music. Man Made just came to a good end, and it was time to do something different. But If you liked Man Made and you see us play or listen to the record, I’ve just gotten better at what it is I do, I’ve not thrown out the playbook.

How do you feel you developed while working/touring with Hans Zimmer in recent years?

It’s made me a way better guitar player, plus being a part of such massive music helps me think about chord changes in a different way. It’s mainly the confidence to stick to an idea because I know it’s good. I mean, I’ve been on enough Hollywood movies to start to think I kind of know what i’m doing with this whole guitar thing.

Was there ever a time in your life when you considered doing anything other than being creative (either musically or artistically)? Could you ever have seen yourself in a ‘mundane’ job?

If you’re asking what the Tories want me to retrain as… I don’t think I have any transferable qualifications or life skills. So send my apologies to BoJo.

I watched the live stream/playback/Q&A you did on Instagram. I thought it was interesting that you attracted a lot of questions from those more ‘technically’ minded, for example about what specific tunings you use. Is Nile Marr a ‘Musicians Musician’ more than a ‘pop star’?

I’ve got some good nerds who follow me. I’m also a nerd. When I was a teen I would totally geek over guitar players I liked and their gear and set ups etc. I just never had the opportunity to ask them about it. I’d have to just see them live and try and work it out. So I’ll always make time for geeking out. I’m definitely not a pop star, I don’t think I can step up to that level. I’m not really a ‘musicians musician’ either I don’t think. I play in weird tunings and I can’t read music. So I’m not what theory heads would necessarily fan out on. I’m an Indie musician!

Part Time Girl seems to be a very popular track with fans on the album. Do you have a favourite?

I like slower ones, Perfect Crimes, or Teenage Kissers, but live Soft Sculptures always helps elevate the show. Opening a gig with Goes Down Slow is pretty fun.

Is The Pusher written from your perspective of living in the centre of Manchester or one of the characters having conversations around you?

Yeah, it’s based on that serial killer we’ve had in Manchester, who’s apparently been operating for years now. Perfect pop song material. I’d want a better name if I was a serial killer though.

Do you make music primarily for yourself or with an audience in mind?

I make music that I think the 16 year old me would have dug, there are a lot of people like the 16 year old me. I love melody, I love chord changes. At the end of the day I just want to write songs with good choruses and clean guitar. I don’t think i’ll ever move past trying to write Anthems For A Seventeen Year Old Girl by Broken Social Scene. It’s why I keep making music, and I’m not sure i’ll ever get it right.

What means more to you? Having someone tell you that one of their songs changed their life, or selling tons of albums?

I mean selling records would be cool. But I like my fans, they’ve stuck with me and I’ve got a solid group of melody chasers. I did have someone tell me their first child was born to one of my songs. That’s a pretty heavy trip to lay on someone.

You have a very eclectic taste types of music, from out and out pop to rock. Regardless of musical style, which 3 or 4 acts would you take on tour with you if you could?

I mean there are loads of acts I’d love to open for. But ones i’d like to do some touring with Goon, Blood Wizard, Wooze and Happyness. I feel like we’re all in on the same joke.

Your Dad recently got to work with Billie Eilish on the new Bond Theme. Are there any artists you’d like to collabrate with?

I mean all of those above. I’d love to be the extra guitar player in The Want’s or Nation of Language. But yeah, those cuties all have my number, and they know I’ll answer. I’ll be on the next flight over.

When did you first realise that your Dad was a legend within your home city?

I mean it’s always been pretty normal, but like not being able to get public transport or just go to the football is a weird thing to have to deal with I guess?

You’ve lived and toured all over the world but Are You Happy Now? is dedicated to the people of Manchester. Is it deliberate that the vinyl is blue for City?

I saw you in 2019 at Night And Day during your residency and there was a real feeling of a homecoming and a celebration. Do you have a preference for the more intimate gigs or being part of a larger ensemballe, say at Coachella?

Both have their place, both are fun in different ways. I feel pretty lucky that I get to play both. If you play a stadium like you play Gullivers, you bet your ass it’ll be a better show.

What is your favourite venue in Manchester?

Gullivers is hands down the best venue in Manchester. I’d love to play The Castle again, but I think once you’ve outgrown it there’s no going back really. I just hope the city bothers to fund the arts in the way they like to trade off them for their reputations as a ‘hip music’ town. So fingers crossed those places stick around.

I believe you’re in the process of finishing your next album. Will you be touring Are You Happy Now? before releasing the next one?

Who knows? I mean I’ll only tour when it’s safe for everyone to do so. We toured Are You Happy Now? for a solid year prior to the release, but our set lists are pretty good. So i’m sure folks aren’t gonna complain.

We now seem to have something to look forward to in 2021 with a vaccine for Covid. What are you personally looking forward to?

Another new album for me, and plenty of releases from other folks on our label.