With a small cult following, they remained on the outskirts of the Soviet underground. Misinterpreted back then, this strange hypnagogic music still resonates today. Irina Shtreis unveils the alien side of Russian new wave. 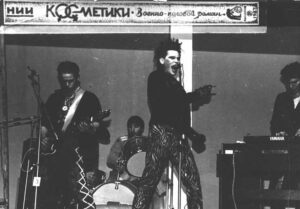 Such phenomenon as ‘novaya volna’ or Soviet new wave emerged in the USSR in the early 80s. Although influenced by British punk, the counterculture behind the Iron Curtain skipped its rebellious phase and moved on straight from conventional progressive rock to synths and drum machines. The new movement started in Moscow, following the international grandeur of the Summer Olympics in 1980. As the new scene was taking shape, some bands reached the “inner circle”. A few collectives, such as Tsentr (Centre), Nochnoy Prospect (The Night Avenue), Zvuki Mu (Sounds Mu), were accepted and supported by the Rock Laboratory, the state cultural institution, established by the Soviet government in order to control the activity of underground musicians. Others remained on the periphery.

Named after an imaginary Research Institute of Cosmetics, NII Kosmetiki followed a solitary art-punk trajectory. Before being noticed by Ariel Pink, who included their track for his article in FACT magazine, the band had been known to a tiny circle of eager music enthusiasts in Russia. When heard abroad, this music evokes the cold minimalism of Ultravox, Stevie Moore’s quirky lo-fi and the androgynous voice of Boy George. But, unlike all these mentioned references, NII Kosmetiki still sound like nothing else. Their histrionic vocals are sometimes out of tune and change pitch as if there was a Doppler effect. The blurry sound reflects that sense of a decaying, pre-Perestroika environment.

The release of the NII Kosmetiki’s debut ‘The Clinical History’ (Istoriya Bolezni) followed an event that was supposed to become a communication bridge between the then two competing states, the US and the USSR. The first-ever video-link between American and Soviet citizens connected residents of Boston and Leningrad. Despite the initial agenda – to unveil mysteries and introduce USSR as a forward-looking country – the session caused even more misunderstandings than there had ever been. During the broadcast, one of the participants from the Leningrad studio uttered a phrase that stuck in minds of the foreign audience. “We have no sex in the Soviet Union”, stated Lyudmila Ivanova and continued, “But we have love”. Clipped to the point, the quote was excessively cited by media introducing a new cultural stereotype.

Challenging this “imposed asexuality”, NII Kosmetiki created an image that shocked Communist activists. Their gigs often included elements of an art performance which featured half-nude dancers, an inflated red arm fixed to the fly on the frontman’s trousers, or naked mannequins whose private parts would be covered with teddy bears. The show often had an impressive effect on the audience who would willingly express their love-hate reaction. Some frenzied members would climb on the stage and start kicking the musicians or, on the contrary, join the fun. One of the most scandalous incidents in their live experience featured a woman who took off most of her clothes in front of the excited audience. She was shortly dragged from the stage by the venue security. When interrogated by the police, the musicians claimed they had had no clue that such a bizarre thing would happen. Of course they hadn’t.

As stated in their name, the cosmetics was an integral part of the band’s androgynous new wave image. The list of necessary outfit items included tuxedos, military uniform and less obvious elements such as a volleyball net, which Valery Fishman, the drummer, would often wrap himself in. In his memoirs, Andrey ‘Inspector’ Migunov, the guitarist of the first line-up, describes frontman Mefody as a man with ‘a gaze of a mystical creature’ that would remind one of Johnny Depp. With an impressive makeup on, dressed in leopard print leggings and military boots, he reminded of a Kabuki actor.

Mefody was also the chief songwriter. His lyrics are funny yet provoking. Texts on most of the songs are peppered with eroticism and allusions to sexual intercourse, mysticism and death. Sometimes they sound too histrionic to be taken seriously. “Oh Werewolf the Fox, mind my poisonous tongue”, for example; a quote from ‘Werewolf the Fox’ (Oboroten Lis), perhaps their most well-known song, telling a story about a man, caught and eaten by the mystical creature, who in turn got poisoned after having the protagonist’s tongue for dessert. Blurry synths and lethargic beats are heard through a soothing layer of grey noise. To a person born in USSR, such soundscapes evoke suburban melancholia and the romanticism inherent in decadent Soviet facades.

Some songs like ‘Gender Equality’ (Polovoe Ravenstvo) mention social aspects of sexuality. With a Scott Walker-esque voice, Mefody croons in the chorus “Gender equality is a myth”. The line addresses to the article in the USSR constitution that guarantee equal rights for Soviet men and women. Lyrics of ‘Nana’ describe the delusional encounter and subsequent seduction of a protagonist by a young girl who turns out to be an old hag.

With a limited number of magnetic tapes, the release didn’t spread much further beyond the band’s circle of close relatives and friends. Yet, once the collective was acknowledged by the Rock Laboratory, Mefody decided for them to take a turn to a studio-quality sound. Professional musicians were hired, and the next album, ‘The Military Sexual Novel’ [what a title! – ed], was recorded with new members.

If on ‘The Clinical History’ eroticism and sexual motives sound a bit childish and seem veiled in mysticism, later works explore this subject with obsessive scrutiny. One of the subsequent concept albums, ‘The Heroes of Porn Fables’ starts with an audio fragment from a fake communist deputy committee deciding on whether they should ban the band – the agenda for doing so is, as they mention, crucial for the future “birth rate statistics”. Many songs refer to urban legends and anecdotes mythologizing sexuality. One such is a slightly vulgar, Chaucer-esque anecdote, about a woman visiting a carpenter who pretends to be a gynecologist and offers her a medical examination, etc. etc.

Sex-related topics remained the band’s trademark until the latest release. Following Mefody’s return from Holland in 1995, NII Kosmetiki recorded the ‘Music For Sex’ trilogy, which featured some of the material composed by their frontman abroad. Due to their lack of interest in promotion, most of this music still can’t be found on physical records and even online.

Re-discovered in the early 2010s, the band influenced some foreign musicians, e.g. Ariel Pink and Puro Instinct, as well as Russian modern new wave artists. Last year they appeared at the Bol festival in Moscow which was the band’s first gig in the last twenty years. Composed nearly three decades ago their music sound mesmerizing and novel.