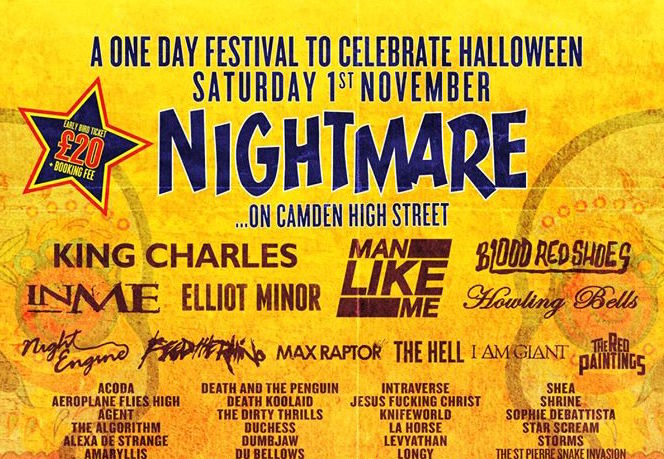 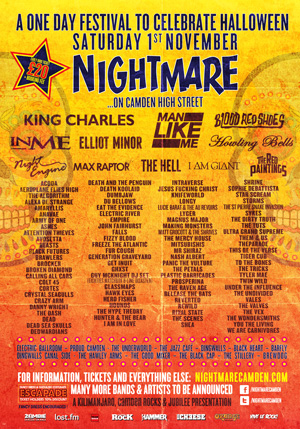 Camden’s having “a massive Halloween party” on Saturday 1st November and with all the bands now locked in, Louder Than War’s Keith Goldhanger previews (via Youtube and the written word) “Nightmare On Camden High Street”.

Whilst you lot sit on the sofa uncovering your inner tourettes as you watch the new series of The Apprentice, those of us on the front line have given up already and have been hard at work trawling through 120 bands who are about to appear across 13 venues around North London on Saturday 1st November under the banner of “Nightmare on Camden High street”.

It’s the night after Halloween.

Anyone over a certain age still wonders how it happened that the UK suddenly began placing this awful event above Guy Fawkes night (the smell of gunpowder, bangers in neighbour’s dustbins, building a bonfire and reminding children that this was all about someone trying to blow up the Houses of Parliament…)?

We trust these people (whoever they may be) who have worked tirelessly getting this together and as easy as it may be to shrug at events like this and accuse it of containing too many bands that time simply will not allow to be seen, it has to be said that in reality you only need to find half a dozen bands of your liking during the day in order to deem this as a success.

120 bands, 13 venues, but the licensing hours remain the same.

Take the names away that appear on the poster in a big font like BLOOD RED SHOES, HOWLING BELLS, KING CHARLES, INME, MAN LIKE ME (that most of us know already) and we’re left with what looks like the line up for next years Grand National.

Therefore with the help of the trustworthy laptop and the websites known to all as YouTube and Soundcloud we’ll go through these unknown bands for you.

And filter out the ones that catch our attention and make us want to be there and hopefully tempt you to join us.

That is assuming these are unknown to you.

And they let us in.

They’re unknown to us and we go out every night.

So we may as well just begin with the bands with the best names first and hope there’s not too many that sound like Nirvana.

That’s how to grab ones attention.

He’s a one man band from Norway who sounds like a one man “Pulled Apart By Horses” and has a song called “Imma gonna kick u in da face”.

He states he’s “Putting the ILL and NAUGHTY back in Illuminati.” What more can anyone need?

After a very good start we glided through dozens more and you can hear below the ones that seemed to shine above the rest … However, IF we were to present a “best one of the lot that actually, now we’ve made the effort this could actually be a bloody good day out” award (which may not be a very catchy title.)

It would be this lot…

THE ALGORITHM – A bonkers French duo that remind us of a heavy metal version of Atari Teenage Riot minus the shouting, with Slipknot rhythms and hands in the air moments that even fans of the Prodigy would be happy with, a heavy metal Fuck Buttons if you like … phroooaaaahhhh as the expression goes … This is brill.

And of course, THE HELL are playing:

I AM IN LOVE seem to have a few decent tunes that we went through here’s the one we enjoyed the most.

HERO FISHER are another band we didn’t even know existed a week ago but now we do and now we’re happy.

…may not be the craziest moniker in the world but we listened to this track and liked it.

After three of four listens whilst dusting the sideboard with our eyes directed away from the computer screen we imagined a lady on a high rise building reaching out for a box of Milk Tray being offered to her from a would be lover hanging from a helicopter in a James Bond movie.

Then we looked up and …. well we didn’t get that at all unfortunately but not to judge a book by its cover … or in this case some music by its video…

HUNTER AND THE BEAR remind us of Westlife, or that band that headlined Glastonbury a couple of years ago who eventually stopped playing anymore once the weekend ended …

Above are GET INUIT – a bit Buzzcocks, a bit more shouty.

EAT THE EVIDENCE remind us of Jamie T with an accordion and seeing as though this lot don’t seem to be hollering about babies and ghosts is quite appealing.

Don’t sound like Nirvana and are ace. We know they’re ace because as soon as we saw this we remembered having seen this band before.

SYKES look good on the strength of this as well.

Have you ever wondered what it’s like to listen to dozens of bands that all sound a bit like this, one after the other ?… this is GENERATION GRAVEYARD singing about being stuck in “Shithead Avenue” and shaking their heads a lot…

AEROPLANE FLIES HIGH — Named after a Smashing Pumpkins song and discovered by these ears after trawling through some of the most boring YouTube videos that exist in order to find one with a tune attached to it.

ALLUSONDRUGS – loud guitars, soft welcoming chirpy Blur like tunes with vocals that came in just as we were bracing ourselves for another shoutfest – can’t quite put my finger on who the singer reminds me of though…

The lead singer of MAX RAPTOR looks like Danny Dyer…

THIS BE THE VERSE – shouty stuff.

…look, if you’ve reached this far then give yourself a pat on the back and think of how we felt after trawling through 120 of these….

I think there’s enough going on in Camden that day to keep us entertained on November the first. All we have do do now is wait for the organisers to release the schedule and see which bands clash with each other and ruin the plans we didn’t have last week but now have a certain few we really really wouldn’t want to miss.

Come and join us.

Tickets for Nightmare On Camden High Street can be bought here.

All words by Keith Goldhanger. More from Keith can be found over at his Louder Than War Author’s Archive.