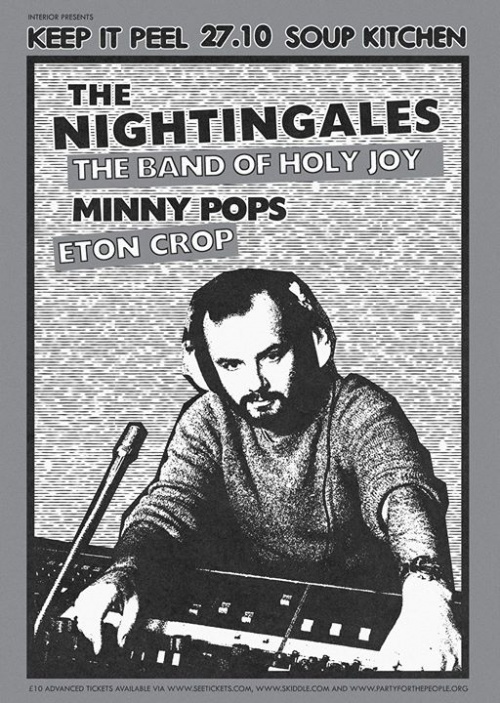 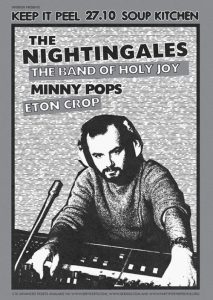 We are in the bowels of the Soup Kitchen – a perfect venue for these valiant survivors of the classic Peel era (it’s John peel we are celebrating tonight) watching a selection of quirk-vets who, somehow, are still twisting music around to their own ends.

Tonight is a Holland v England micro international and is a wonderful example of how to age as someone once sang.

Unfortunately time is against us and we miss Eton Crop – the Dutch representatives of the Death To Trad Rock bands who emerged in the mid eighties underground. It would have been good to have caught up with their pithy grind pop and succinct world observations once again.

Minny Pops are as fantastically eccentric as ever – the band. who were a satellite to the Factory mini empire, still have an eternal teenage gangle about them which is impressive for their 50 plus status. They display a wonderful enthusiasm and wilful eccentricity and big toothed grins that is powered by their hypnotic music that still has the DNA of that Factory Records sound – the repetition and the pulsing power and as you are pulled into their web of sonic intrigue you are stunned that somehow this band sound better than they did decades ago.

They are proof that the brand leaders of any scene are not the only noise in town, Joy Division may have been golden but the foot soldiers were just as good and, for me, Minny Pops are up there with the great Section 25 and a couple of others as examples of the depth and breadth of this world.

Band Of Holy Joy are unassuming in physical status and a hurricane in musical passion. Their music is like an elixir as it circles the room, building and building and then boom! it’s got you. There was a time when they were the big noise in town – front covers, lots of buzz in the late eighties but music, as it does, decided to go somewhere else and left their post Pogues poetry and street stained vignettes to the broken hearted high and dry. This does not demean them though – after a long break they have returned and are as full of the broth of passion and life as ever.

In some ways the unfair way that the music world has treated them only makes them better. It makes them firmly identify with the outsider and broken lives that they have always sung about with a very personal understanding. Someone yells into my ear that this is the band that the later day James were inspired by and you can hear it in some their songs – especially a long and hypnotic piece in the middle that builds and builds and is quite stunning in its power and grace.

The Nightingales are still the outsider’s outsider band but the past few years of intense work has seen chinks of light for them. The modern day ‘gales, should, by any long chalk, be a burned out wreck of a band but somehow they sound utterly invigorated and on fire. They are as caustic and poetic as ever but driven by a ridiculously good rhythm section that never sits still.

Fliss Kitson is a wonderful drummer – someone remarks that this is like watching Kat from the Ex – that polyrythmic power and imagination, that thrilling multirhythmic approach that switches around and is yet so danceable – you find yourself nodding like a maniac to her drumming prowess and your heart pumps to the thundering power of the consistent bass drum. This would be enough to reinvigorate any band but the bass is fanstatic as well – all spider runs and quirk riffology that makes this the best rhythm section in town and one that hooks in with guitar’s fuzz runs that make the band sound like frantic and punk rock version of early seventies prog weird.

The 2016 Nightingales are like Magma on speed, Faust in an urgent rush, Zappa with a punk temper, they are like Chaucer with a great band of zig zag wanders on route to play some dive in Canterbury. They take no breaks between songs and play a solid one hour of colliding riffs, breathtaking musical styles and lyrical imagery that is outrageous in its ambition and precision – like an early Faust album. Rob Lloyd is still the charismatic wordsmith, his voice still a beautiful croon as he holds onto the mic stand like his life depends on it as the band seethe to perfection around him.

It’s a great turnout tonight but the Nightingales deserve so much more than this and it can only be a matter of time before we wake up to their fervent brilliance.