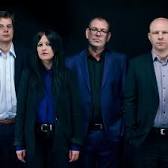 Of course there were no rules in punk rock.

Hurtling on several decades since his first adventures on stage with one of the originals, The Prefects, ‘Gales singer Rob Lloyd finds himself in the curious position of fronting a band that is so hot wired that it could be the best of his career.

That’s against the rules.

At this stage of the game bands are usually perfunctory – dishing out lukewarm versions of semi hits to the faithful. The 2016 Nightingales are band on fire with an inventiveness and bludgeoning brilliance that puts them at the top of their game. They sound heavier and more on the edge and yet more complex than ever before – a steroid Magma that is ground breaking and thrilling.

There have been some great Nightingales phases and some great Nightingales line ups but this crew are something special. Tight and angular with obtuse and grating made to sound precision perfect this is the Beefheart of Lick My Decals period cranked with that edginess that only survivors of the punk rock wars understand how to make and it makes for a profile brew.

The current line up really do a great service to this music and have reinvented the band’s powerhouse poetry into a cheese wire guitar, grating heavy bass that also doubles with great runs and licks and these stunning drums from Fliss Kitson who a musical heart and soul – she is a stunning drummer and gives the band a polyrhythmic edge and real power that makes them sound as thrilling as a hardcore band but with a fluidity and inventiveness that most rock bands can only dream of.

Their one hour set has no breaks in it – the entwine the songs into each other and it’s a hypnotic and powerful experience with rare concessions to their own history like a galvanizing take on early single, Paraffin Brain. It’s a great version but they don’t need the past. They don’t even need ‘normal’ songs . The Nightingales in 2016 are like Swans in that they make the difficult hypnotic and they massage your brain cells with time changes and packed riffs and shards and snippets of musical ideas that somehow also drag splintered melody and tension into their musical workout that makes them a thrilling live prospect.

On top of this Rob Lloyd still packs a charismatic presence – a black suited, tap room, poet – shaman who is really focused tonight as he sings in his addictive croon with words and phrases tumbling out, making magic out of the mundane with a caustic cauldron wit and dead eyed sarcasm.

It really is brilliant stuff. The band are on the road for the rest of the year and only a fool would miss them.