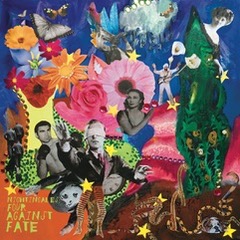 “While other bands singe their puny parts on a bonfire of mediocrity the Nightingales give the gob-shites a lesson in blue collar art-rock ‘n’ roll!  Probably their absolute best album yet, says Ged Babey, who says that every time, but this time, it really, really, really is…

Gods Daughter in her chariot pulled up next to the pub …

Do you know the joke about the cowboy with chapped lips?  I could just about remember it from the dim and distant past. (It’s a cracker. Actually it’s not.)  It’s a terrible old joke – but Robert Lloyd works it, in a surrealist style, into the lyrics of ‘Thicko Rides Again, the opening track to the latest, greatest Nightingales LP.

But that, in a nutshell is the stumbling block maybe: If you’ve never encountered that ridiculous joke from the 1970’s will you still be able to fully appreciate the genius of the Nightingales?

Well, just listen to the bass-playing on that track at 1:30 until the Alright!

Or the unexpected detour into a Highland fling towards the end of The Top Shelf.  Then there’s the prog-pop epic Neverender, with its half-dozen time-signatures…

Or The End Began Somewhere which contains a great Lloyd monologue about separated parents … Dive into the ball-pit with the Saturday Dad who feeds the dog crisps and then licks his hands  … the ten year old daughter in the t-shirt you got her, If You Think I’m A Bitch Then You Should Meet My Mother…

There is just so much to love about this album.

Standing on the corner with a whiskey in my hand.. is a more easily recognisable  reference point but Lou Reed never wrote songs as multi-faceted, funny and bizarre as these. No-one has.

The Standard said I was a funny guy..

This is the arguably the first Nightingales album which throws off completely the detractors mis-informed idea that they are a downbeat, miserable bunch.  It’s a Gales album with a shabby, shot-away joie d’vivre.  Not that it’s an easy listen, it still takes a bit of work…

Over the years and ten albums since they reformed, Nightingales have just got better and better, madder and stranger and developed what they describe as “A psychic interplay. The rhythm section of Fliss and Andi functions now on a purely intuitive level. Jim’s work now ranks with that of any guitarist in modern ‘rock’ music...” they are simply a great rock group who use constantly changing time-signatures and baffling wordplay to create a playful, poetic and rockin’ mix of glam, twang, country, pop and the avant garde that’s in a category and class of its own.

And it smells a little something like this  -Huh!

Stars of their own documentary King Rocker made by Stewart Lee and Michael Cummings, the Nightingales have finally been recognised as the brilliant, unique, funny-ha-ha and funny peculiar band they always have been, and their figurehead Robert Lloyd one of Englands greatest living poets. (or at least The Poet Laureate of the West Midlands Bookies, Bar and Curry House, as a wise critic once said).

Even the press release is so sexy you need a cigarette after reading it.

Four Against Fate is remarkable. It’s the work of what’s now the band’s longest-serving line-up. The instrumental precision of any version of Nightingales has been one of the band’s defining hallmarks… Each member sings. Although Robert’s voice functions as the band’s superego, Fliss takes lead in several songs…. Few bands today sound as much like a single unit as do Nightingales, but this group has the bonus of a distinct and credible musical language, exemplified by The Desperate Quartet, which comes across as both a medieval war march and the anthem of looming apocalypse.

a portrait of the artist as a young prick..

Fliss Kitson singing more than ever, is arguably part of why the ‘Gales sound fresher and more upbeat than ever – but it is more her and Roberts bizarre Nancy’n’Lee style interaction and chemistry that makes it.

Everything, Everywhere, All Of The Time is a Bontempi bossanova nursery rhyme different singers intoning different lyrics in the left and right channels – a trick from the Velvets the Murder Mystery.

In Devil’s Due Lloyd sings: Every song I write begins with an I / Every opinion a death I will die / fortune comes and goes in the blink of an eye / …a shabby messiah with no news to give.  Which is reminiscent, by sheer coincidence I imagine, of Nick Caves More News From Nowhere and funnily enough Dig, Lazarus, Dig!!! is the only other album i can think of which comes anywhere near Four Against Fate in terms of the kinetic energy created by the combustion of wonderful words and momentous music.

There really isn’t a duff track on the album and every artist thinks their latest is their best, but during lockdown I actually spent a couple days listening to the entire Nightingales back catalogue – and I came to the conclusion that, despite my unwavering love of Out Of True – this really is the most fully rounded, eminently enjoyable, perversely inspirational, darkly comic and musically accomplished album they have released.

And Stewart Lee says the same.