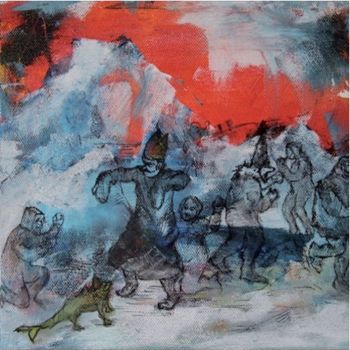 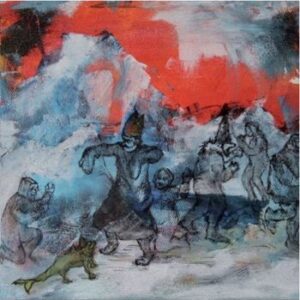 The opening track of this six track EP, B-Side at Best, bursts upon your ears like a classic punk song, all urgency and energy and you could be mistaken, if you didn’t know the Nightingales, that not much has changed since they were formed out of the ashes of the first Birmingham punk band The Prefects. But if you do know the Nightingales amazing back catalogue then you won’t be surprised to hear that the punk intro soon distorts into something akin to Frank Zappa meets the B-52s.

Robert Lloyd, leader of the band, has led the Nightingales through 30-odd years of musical experimentation and delight, never quite achieving commercial glory, but picking up critical acclaim at every release. Become Not Becoming is another groove in an oeuvre of wonderful, inventive music.

The music is Devo, Beefheart, Zappa, Industrial, Jazz, avant-garde and Nick Cave all mixed up with a spice of punk mischief and a knowing wink. The band is tight, holding down the discordant rhythms and changing time signatures so tightly that one nods away barely noticing the changes. Lloyd’s voice is like a demonic vaudevillian actor on acid.  Lloyd is the crazed conductor holding it all together so that even the chaos feels controlled, though never constrained. This is music made for the sheer joy of it, with nothing to prove to anyone.

The Divorce That Never Was blows me away with its scorching buzz saw guitar and drums pounding into my brain. Too Posh To Push descends into anarchy before resolving beautifully. Booze and Broads and Beauty is a descent into a weird world and Drown wraps it all up beautifully.

Become Not Becoming is available on 10” vinyl and download. Nightingales are out on tour now. Catch them here: