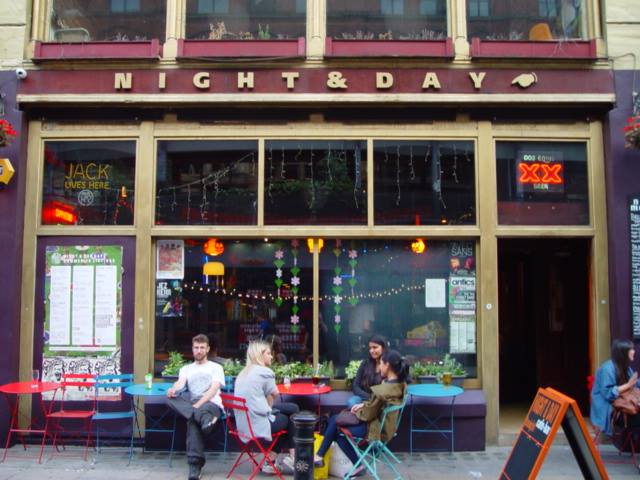 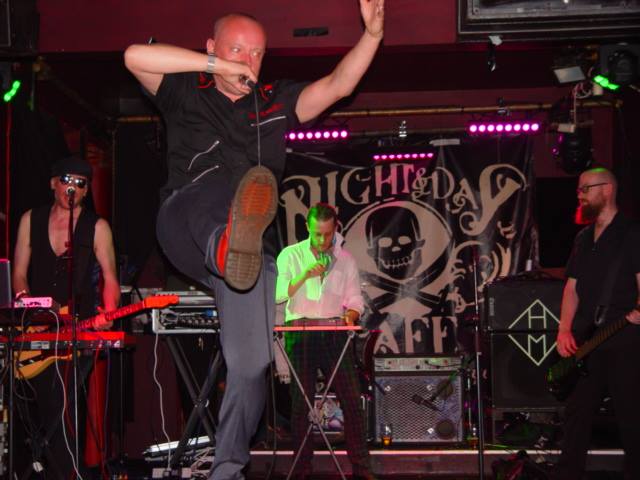 Manchester still has it: when it comes to cutting-edge, alternate music. Wednesday the 4th June was ‘local showcase’ at The Night and Day Cafe, bringing forward three very diverse bands (St Lucifer, tAngerinecAt and Holy Matrimony) who all veered away from normality in their inventive noise… determined to defy genre, dress-code and even the stage itself…

‘Local Showcase’ at The Night and Day opens up the substantial stage to homegrown bands looking to gig in Manchester. St Lucifer were the first to play; four men from four different decades, each bringing their own electric interpretation of darkness. This was industrial anti-pop played in an ideal venue, with the Night and Day’s superb sound-system sending their thudding beats and agitated yet articulate guitar sound around to all.

‘Throwing himself from the stage’

They enter a genre they have invented themselves ‘blackmetalgaydiso’ which ultimately summarises their attitude; see what you like in them – the saint or sinner, the made-up or the meaningful, there is the glittering brilliance of both. Even though they were first on the bill, St Lucifer gave a powerful performance, as if the tensions had stacked up all week and now expression was necessary; the frontman snarling into the microphone, even throwing himself from the stage.

‘Sit right down and pour yourself a drink,’ lead vocalist Alex Lee roared, as the band interrupted into a fuzz of noise with ‘Beowulf’, co-ordinated to the track thanks to John Mitchell’s bass. This is what the band do best, take the turbulence of the modern mind and turn it into music – with tracks on the night including ‘Angular Depression’.

St Lucifer’s music plunges the audience not just into noise, but into other narratives; stories which send Alex jumping over the stage, twisting the mic, as if they are seething up under his skin. The crowd were quickly captivated by ‘Van Der Lubbe’, one of the bands most recent singles, which sends us back to the individual accused of starting the Reichstag fire. Thanks to David Fox’s grungy guitar and accompanying vocals, thumping electronica is topped with the chant-like ‘talk your communist talk, talk your communist talk’. This was a performance capable of communicating the peril of the past.

‘Unafraid of asking difficult questions with their sound’

St Lucifer take history’s victims and turn up the volume around them; something I heard too in ‘Do as Little as Possible’. Here Charlie Bergman’s slick and steady drumbeat hammers a nail in the metaphorical coffin of a character determined to ‘do as little as possible/ for fifteen minutes of fame’. Celebrity culture and some associated individuals come to mind – another way St Lucifer explore and question modern-mind sets. Unafraid of asking difficult questions with their sound; and this is what I particularly enjoy about these local artist showcases.

They show determination; music seen as ‘underground’ is because, like an earthquake, that’s where the strongest tremors start , the most powerful pieces of performance. I feel that I can say this for St Lucifer and also the band which followed them, tAngerinecAt; a duo who combine hurdy gurdy with intense electronica and politically-charged lyrics. Formed in Kyiv in 2008 under the name ‘Dark Patrick’, they have released 4 albums, 1 EP and two new singles; becoming tAngerinecAt in 2015.

‘Drawing the listener into a whole experience’ 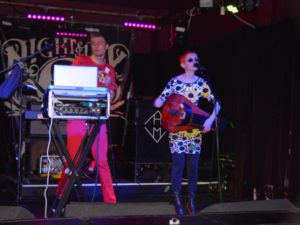 They took to the stage with ‘I Don’t Want To Be a White Master’, an enigmatic whistle played by Paul Chilton inviting us into a glistening glut of sound. This is a track which speaks up against hierarchies; I was instantly captivated – watching Eugene clutch the hurdy-gurdy and giving lyrics which linger amongst their audience for a long time ‘Yes I’m white but I don’t want to be a white master.’ It’s not your typical ‘protest music’, as rather than just angry it is articulate and accessible – drawing the listener into a whole experience, a personal account of Eugene’s life.

The music built in its billowing, bountiful depths: difficult to believe there were only two musicians on stage. They manage a real art; creating sound which people enjoy, yet opening up difficult issues and defying single genre – their creativity draws on elements of pysch, trip-hop ambient and more; a beautiful rattlebag of rolling expression.Thanks to the powerful electronica and the excellent atmosphere of The Night and Day, tAngerinecAt transfixed attention (and respect) towards the stage.

‘The music swirled and curled around us’

We were also invited into an exclusive experience; the first time tAngerinecAt have performed their new track ‘Mudak Salad’ live. This is stinging piece of irony, Eugene delivering biting lyrics on a salad which ‘lured me away from the counter/but poisoned my gut in an instant.’ It’s a highly relevant track, using this modern imagery to address the issue of victim-blaming and abusive relationships – who would have ever thought a song with ‘salad’ in the title would make you question your view of what is ‘romantic’? It questions characters out there who sell themselves as something ‘good’, with big social capital – symbolised in ‘the salad had far too much mayo’. The crowd were captivated as the music swirled and curled around us, a little like the enigmatic figure of a tAngerinecAt. Seriously moving sound.

Last to play in the evening were ‘Holy Matrimony’, a trio who shared some of the dreamy elements of tAngerinecAt’s sound – but with more pop-music tones and a particularly striking stage presence… vocalist Roger Damen spring to the stage, in a full fluorescent skeleton outfit. They conjure up the catchily absurd, the rest of the band in oversized t-shirts whilst Damen led them into ‘In a Dream of You and I’.

With Jack Ellis adding additional voice and also joined with keyboards and guitars from Jonny Adams; it is another example of a small group creating a complete sound.

By their name alone, you may assume that ‘Holy Matrimony’ is some metal ensemble but wen brought together their combinations of synths, harmonies and guitar us more electro-pop. It was a bit of an uneasy contrast from the previous two bands; interestingly clear in the behaviour of the crowd
Whilst St Lucifer and tAngerinecAt kept the audience at an electric distance, with an occasional few brave dancers drifting towards the stage, adding to the mystery – Holy Matrimony had a greater ‘fan’ presence up at the front. This wasn’t a necessarily negative aspect; but a quirky contrast.