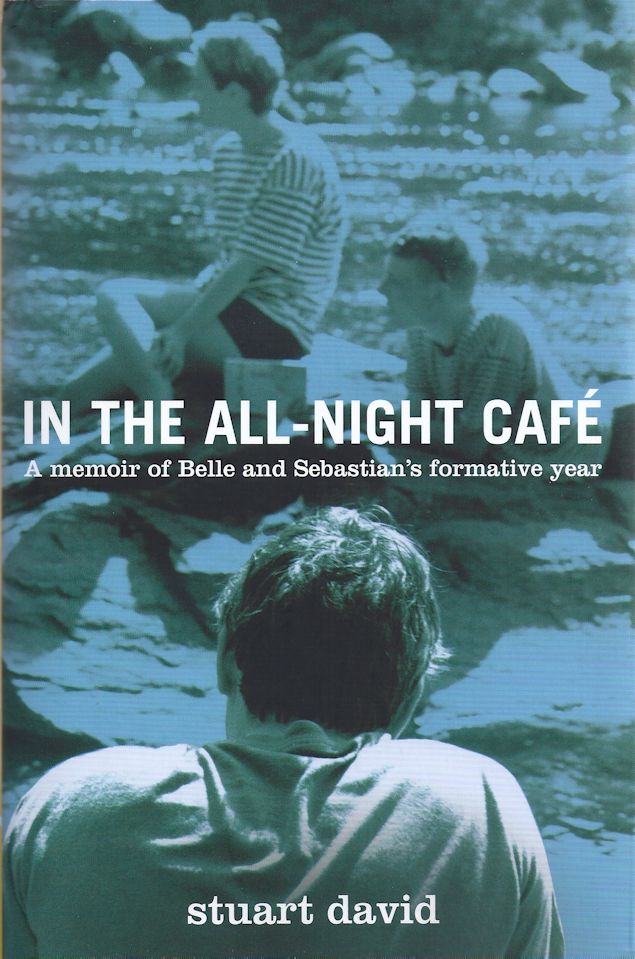 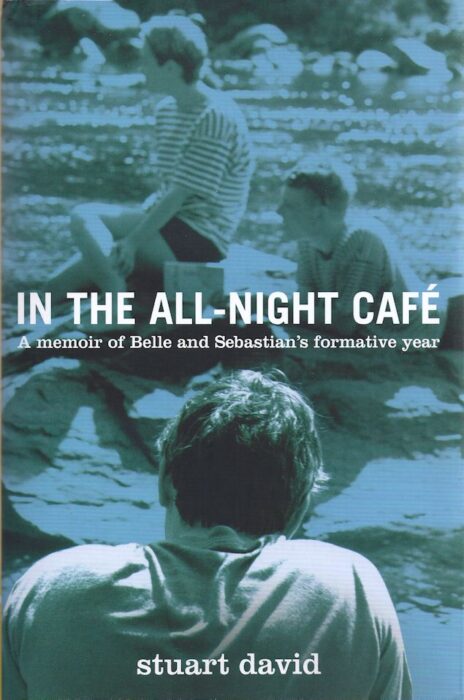 In The All-Night Café by Stuart David (Little, Brown)

Jamie Havlin gives us his thoughts on this portrait of the origins of Belle and Sebastian by their former bassist Stuart David. A tale which explains how a group of friends got together to create a different kind of band and a different kind of music.

One Boxing Day morning in the second half of the 1990s when I was spending Christmas at my Mum’s place, I got a phone from my landlord of the time. This was very unusual and the reason he was getting in touch was to tell me that my flat had been burgled. My first question was to ask about my CDs and record collection.

‘No album with a bluish cover with a naked girl in a bath pretending to breast feed a toy tiger? ’

I repeated the description.

‘I definitely didn’t see anything remotely like that. Sorry.’

So on my way home all I could think about was my very limited edition of  Tigermilk, a vinyl LP that unavailable to buy at the time in any format and which had helped forge a reputation for Belle and Sebastian, an act who all lived in and around where I stayed in my now burgled flat in the west end of Glasgow (just across the road actually from the cafe where the girl on the cover of Tigermilk worked).

In other words, I’m a fan and this memoir was always going to interest me.

The fact that the early days of Belle and Sebastian are still largely undocumented due to the no interviews policy that the band initially employed makes this even more fascinating as the book examines the year or so in which Stuart David decided to learn the bass guitar and sign off the dole through to joining Belle and Sebastian and recording Tigermilk.

Learning the bass for David was a pragmatic decision to make it easier to draft in a new member of his then current band Raglin Street Rattle as finding a bass player was proving almost impossible while finding a guitarist was expected to be much easier.

Signing off was accomplished by volunteering to take part in a government funded work scheme for musicians that went under the appalling name of Beatbox.

This operation was a far from an ideal set up. Housed in a freezing cold and overcrowded bunker beneath a slip road, participants gained only infrequent access to a very basic recording studio and a helluva lot of time seems to have been wasted playing computer golf although compared to what David Cameron’s government would offer unemployed musicians today such as an unpaid job trial in Poundland, then Beatbox sounds like a wonderful opportunity.

Which, against the odds, it turned out to be, at least for Stuart, as it gave him the chance to meet someone who would have a major impact on his life.

This may be the memoir of Stuart David but in many ways it is a tale of two Stuarts as the presence of Belles frontman Stuart Murdoch looms large from the moment Stuart David encounters him at a songwriting session at the home of a fellow course member, who later invites them both down to have a swatch at the S&M dungeon located in his cellar.

Of course this was something neither showed a jot of interest in. In The All-Night Café is after all the story of early Belle and Sebastian and if you’re after scandal, backbiting or any form of sex & drugs & rock & roll excess then you really should look elsewhere.

When Stuart David drinks it tends to be mugs of overbrewed tea in greasy spoon cafes rather than bottles of Jack Daniels in late night clubs and at a party in his shared bedsit flat – so big that security staff from a local nightclub were asked to help out – Stuart goes to bed with earplugs in just as some heavy duty roistering gets into full swing.

The Belle and Sebastian idea of behaving badly is cramming their pockets full with After Eight mints laid out on ‘a huge silver platter over half a metre in diameter’ during a meal where Seymour Stein of Sire Records wines and dines them in an attempt to woo them into signing on the dotted line for an American deal.

There’s an amusing payoff to this but I won’t spoil for you.

Best of all perhaps are the insights into Stuart Murdoch’s unwavering conviction about his music. One section details how, just as Stow College students decide they want to release a CD single by the band on their prestigious Electric Honey label which they will promote as part of their course, the singer almost immediately insists that the release must be vinyl.

Then when course tutor and ex-Associate Alan Rankine agrees to this, Murdoch pushes to record an entire album rather than a single, which Rankine again agrees to, telling Stuart David later that Murdoch’s attitude reminded him of Associates singer Billy MacKenzie: ‘Bill always knew what he wanted […] Great artists usually do. You have to give them room to follow their vision.’

The recording of Tigermilk also provides some fascinating insights such as Stuart Murdoch often declining to choose the best technical take, preferring to use the one he felt was most alive and the book ends on something of a bittersweet note for Stuart David who, even though the band have just celebrated the album launch in fine fashion, can’t help but feel conflicted by their burgeoning rise to fame.

If you’re a Belle and Sebastian fan grab yourself a copy of this.

I found the whole book fascinating and it’s definitely put me in the mood to play my copy of Tigermilk again.

My replacement CD that is.

August 13, 2019
We use cookies to ensure that we give you the best experience on our website. If you continue to use this site we will assume that you are happy with it.Ok