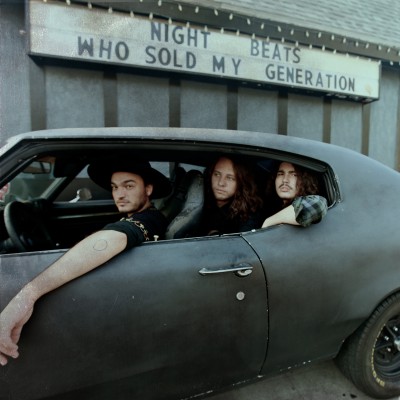 Seattle-based garage-psych berserkers take it to the 99th floor on an album that positions them alongside Ty Segall and Thee Oh Sees as cutting edge garage rock innovators.

I first encountered Night Beats supporting The Black Angels in Glasgow, circa 2011. Bristling with ‘I’m Five Years Ahead of My Time’ psychedelic arrogance, the Seattle-based three-piece easily upstaged the complacent headliners, who appeared to have swapped their early garage punk tension for interminable, billowing dirges. Not long after, Night Beats were back in Glasgow, headlining their own show, and this time there was no doubt about it- the group were sensational, creating a heady, shamanic atmosphere with their tribal psych-grooves, recalling the delirium of The Seeds on their live-in-the-studio classic, ‘Raw and Alive at Merlin’s Music Box’.

The departure of wildman bassist Tarek Wegner may have caused concern amongst some longtime fans of the band, but on the evidence of this, their third long-player, Night Beats’ vision has only become more focused and fully realised. ‘Who Sold My Generation’ was co-produced by Nic Jodoin and Black Rebel Motorcycle Club’s Robert Levon Been, who also contributes guest bass to the album, Wegner’s full-time successor being Jakob Bowden.

Opener ‘Celebration #1’ kicks off with an antique found-sound snippet before pitching straight into an intense trance groove that brings to mind Alan Vega jamming with The Red Krayola. 60s garage rock enthusiasts might hear echoes of Higher Elevation’s tripped-out nugget ‘The Diamond Mine, but then we’re quickly speeding into ‘Power Child’, and it becomes crystal clear that Night Beats are on a purposeful trip on their Heavenly Recordings debut.  The second track encapsulates the satisfying rawness and louche, bohemian spirit that suffuses this album, as Danny Lee Blackwell’s guitar cascades shards of 60s soul, early Stones/Pretty Things and untrammelled psych freakout.

Donovan’s somewhere in the mix, too; the defining characteristic of ‘Who Sold My Generation’ is its wig-out grooviness, an insistent, pounding, tribal stomp driven by James Traeger’s clattering drum tattoos. But, these are soulful pop songs, taking us right back to the mid-60s era of wild rock & roll that you could dance to. Tracks like ‘No Cops’, ‘Sunday Mourning’ and ‘Bad Love’ shimmy and shake irresistibly, like Mickey & Sylvia with ants in their pants, while ‘Porque Mañana’ has a slinky, almost Latin sway to it.

The Latin inflections also come through in the Tex-Mex guitar flourishes that demonstrate Night Beats’ love of Texan psychedelic rock, The Thirteenth Floor Elevators being a constant lodestar for the group. At times there’s even a hint of Brazilian Tropicalia in the intoxicating mix, causing me to ponder whether the great Rio de Janeiro psychedelic alchemist, Jorge Ben, is an influence. Certainly, Ben’s extraordinary run of mind-expanding albums from 1967-1976 shares a similar ‘free-your-ass-and-your-mind-will-follow’ intent with Night Beats.

The Stooges’ ‘No Fun’ gets dosed and dubbed for ‘Last Train to Jordan’, while ‘Turn the Lights’ drags Jacques Dutronc-inspired freakbeat down a dark alley for a dissipated hoedown. Closing the album in fine style, ‘Egypt Berry’ chucks The Cramps, The Count Five and Kaleidoscope into a blender, serving up a lysergic cocktail of a finale.

In ‘Who Sold My Generation’, Night Beats have concocted a broiling album which by any rights ought to blast them out of the basement of cultdom. The accompanying live shows are guaranteed to inspire levitation of one form or another. Get up on their cloud and you might just glimpse clear light.

European tour dates are as follows:

Buy ‘Who Sold My Generation’ here.