Home Books UK Book Reviews Jennifer Otter Bickerdike: You Are Beautiful And You Are Alone: The Biography... 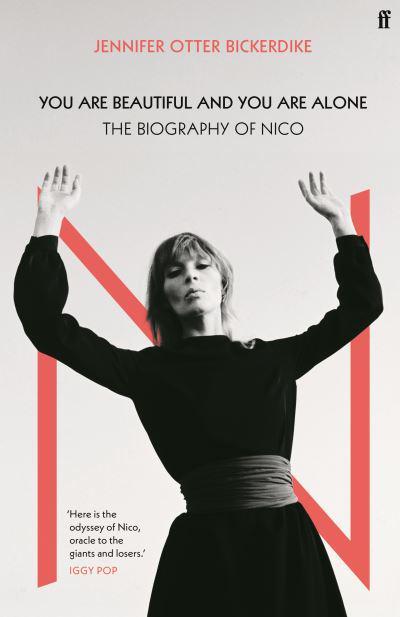 Jennifer Otter Bickerdike: You Are Beautiful And You Are Alone: The Biography Of Nico

Autobiography on artist, model and muse Nico aims to peel back the myths and reveal the person behind the persona. Simon Tucker reviews.

As the epilogue to Jennifer Otter Bickerdike’s new book on Nico tells us, in 1996 the Velvet Underground were inducted into the Rock & Roll Hall Of Fame. Nico however was not. Years after the original VU had broken up and after releasing a string of beautiful and uncompromising albums Nico was still seen as an add-on. Not essential to the band. A pretty face and an unusual voice. Which anyone who is a fan of the first VU and Nico album will tell you is absolute nonsense. Nico’s voice and presence on songs such as I’ll Be Your Mirror, Femme Fatale and All Tomorrow’s Parties are an essential ingredient in the tapestry of that celebrated album. Nico and John Cage helped bring a stark European sensibility to the street-beat poetry of Lou Reed helping the album blur all borders and echo through the ages.

The fact that establishments such as the Rock & Roll Hall of Fame were doing this in 1996 just highlights the fact that it is easy to dismiss the woman in the band. She may not have written the songs on that album but she gave them life. Elvis never wrote his own material either. Now author Jennifer Otter Bickerdike aims to reclaim the legacy of Nico, tearing it away from the heroin, the sex and the myths by revealing Christa Päffgen the woman…the artist…the mum.

You Are Beautiful You Are Alone tells us the full in-depth story of how Christa Päffgen became Nico. We go back to her childhood in Nazi ruled Germany where we find out how as a child Nico was able to see the trains rolling past taking Jews to the death camps, how her father was murdered in the war, how her families wealth could not protect them from the devastation of World War II. We find out that Nico was raped by an American GI and that her mum suffered from mental illness. The way Bickerdike writes about these formative years is perfect. Bickerdike never shies away from the details which force us as readers to start to understand how Nico ended up living the life she did. Nico learned early on how to use her beauty to move on with her life leading to her modelling, acting and eventually coming into the orbit of Andy Warhol’s Factory crowd. It is in this early section of the book, before Nico joins the Velvet Underground where you can see how Nico’s life is going to pan out. Bickerdike helps explain how Nico’s personality was one of contradiction. Nico’s story is often framed as some sad fading beauty but Bickerdike instead highlights early on that even though Nico was able to use her beauty when she needed to she was also aware of the trappings of just being a “face”.

Another aspect of Nico’s life that the book helps readdress is her relationship with men. If you’re a pop culture fan you will know already of the relationships with Jim Morrison, Brian Jones, Bob Dylan and Iggy Pop but what is often missing from the narrative is how she indeed got influenced by them but she was also a major influence on them. She was not just sex. She was important to these men and was often treated shabbily by them so even though Morrison encouraged Nico to create her own songs and perform, he would also hit her as would notorious woman beater Brian Jones. Without a shadow of a doubt though, the most important relationship in her life in many ways was with the actor Alain Delon who fathered her son Ari. Delon would deny parentage of Ari throughout Nico’s life and the obvious pain and torment that this caused her is written about in detail throughout.

You Are Beautiful You Are Alone helps refocus the Nico narrative back onto the music she made and it is a joy to read about the creation of such masterpieces as The Marble Index, Desertshore and The End. With the use of interviews from people such as Cosey Fanni Tutti, Joe Bidewell, Budgie and Una Baines, Bickerdike brings to the forefront the influence that these records had (and continue to have). Performing to often half-empty rooms full of ‘orrible dripping “punk” misogynistic attitude (thrown bottles, spit, heckling), Nico always faced front and never backed down. Reading the book gives you the sense of how brave she was in these circumstances. Nico was often alone on stage with just her harmonium and for her to be facing these crowds, never buckling, in the grips of addiction shows that she really did have a true strength of character.

This is the best music book you will read this year. Jennifer Otter Bickerdike has created an enthralling read and when she inserts her voice into the narrative by including details of where she met interviewees, how they spoke etc she manages to inject a more magazine style of writing but instead of jarring it feels natural. It feels like Bickerdike is a detective interviewing people for the detail that will crack the code and reveal the truth. Like all good music biographies, You Are Beautiful You Are Alone also makes you reacquaint yourself with the music itself and this is its biggest plus. Knowing what we know after finishing the book really helps to make you fall deeply back in love with Nico’s music and what you realise is that whilst Reed was getting all the plaudits, Nico made music that was often better than his and was also some of the most pivotal music in the creation of what we now call post-punk.