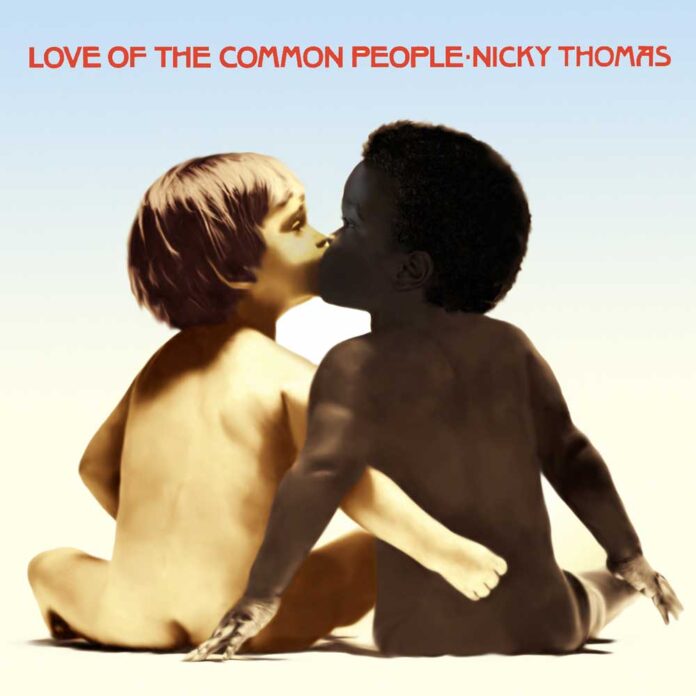 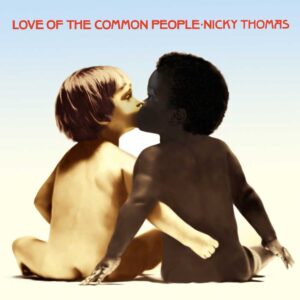 Reissue of the 1970 album by Nicky Thomas that was released by Trojan Records in the wake of the title track’s single success. This 2CD set comes with the rest of Thomas’ output for Joe Gibbs plus bonus material in the form of DJ cuts, instrumental takes and original Jamaican mixes. Ian Canty loves common people like you…

One of my earliest musical memories was hearing the Nicky Thomas single Love Of The Common People on the radio. I was only a kid at the time, but its simple message of resilience in the face of the adversity life can throw at you was easy even for me to grasp. It is a truly great single – Nicky’s delivery of the lyric is something to savour and the subtle rhythm made it dance-friendly too.

Nicky Thomas was born Cecil Nicholas Thomas on 30th May 1944 (though other information sources quote 1949 as the year of his birth), in Fruitful Ville, Portland on the north east coast of Jamaican. He arrived in Kingston during the middle years of the 1960s to find employment and ended up labouring next to The Gladiators’ Albert Griffiths. Thomas was beginning to compose his own material and singing one of his own numbers Hello Carol at work led to Griffiths sneakily taking it to his group to record. On unexpectedly hearing his own song on the radio, Thomas resolved to build himself a career in music.

After a short and unsatisfactory time recording with Derrick Harriott where he performed under the pseudonym Mr Nigel, Nicky decided he would be better off pursuing his career elsewhere. He started working for Joe Gibbs at his Amalgamated set up, managing the shop and recording mainly as a backing vocalist to start with. He then cut his first solo disc for Gibbs, using his birth name on the original composition called Danzella. But then the producer found the US soul hit Love Of The Common People for Thomas to record. Written by the pair John Hurley and Ronnie Wilkins, the tune was even by this time a much covered tune with even Leonard Nimoy having a go. Despite many American readings, the song had never made much headway in the UK.

This was important, because Trojan’s British operation saw the potential of Nicky Thomas’ version when it arrived from Jamaica. They drafted in arranger John Arthey to put strings on it and generally soften the sound and released the amended disc in May 1970. Coming just after skinhead/boss reggae’s prime the record took its time to make a mark, but eventually scooted up to the UK Top Ten. Unsurprisingly Nicky had it on his toes sharpish over to the UK to promote the record and tour. In the end he opted to remain there permanently.

Before his flit to Britain, Thomas recorded enough material for two more singles and an album named after the hit. Love Of The Common People in LP form is a mix of previously released material with new items and it retailed at the pocket money-friendly price of 99p. The album forms the first part of disc one here and begins with follow up 45 God Bless The Children. This offering was found on a Staples Singers’ record and has strings liberally applied to the Jamaican recording like its forerunner. Rainy Night In Georgia is another repositioning of a r&b standard and folk totem If I Had A Hammer gets reggae-ed up well with a strident rhythm. Like God Bless The Children it failed as a single. On hearing seems a tad unfair, it’s a good dance tune elevated by a convincing vocal performance.

Turn Back The Hands Of Time has a truckload of UK “enhancements” which dampen the impact for me, but Doing The Moonwalk is a rougher and tougher sound which shapes up a pleasing boss reggae item. The title track follows and its a real charmer that has me slightly dewy eyed – this record and the LP sleeve of two little kids kissing, one black and one white, sums up the hopefulness of the early 1970s for me. Have A Little Faith is a really neat soulful skank and with Don’t Touch Me being another good one, though by now on the album the echoing backing vocals do feel a little overplayed for me.

The oldie I Who Have Nothing was pretty long in the tooth even back then, but Thomas and Gibbs get a few new wrinkles out of it with a bright treatment. Although the following version of Let It Be is perfectly decent, it doesn’t have the same impact. Gibbs’ own composition, a lively chant called Red Eye ends the set. Overall this is a really listenable album, but it is a shame that Nicky himself didn’t get any writing credits. Though the covers are handled very well, he could come up with good quality material of his own.

Fortunately this is something that is evidence on the nine bonus tracks appended to this disc, beginning with his infectious first Joe Gibbs single Danzella. It’s followed by an instrumental version by Lloyd Willis & The Destroyers. (Life Is Down In) Denver gets the whistling Roger Whittaker treatment, but that apart is a good natured dance number and I Can’t See Nobody is a breezy melody with a bouncing tempo. A rewrite of Gary Puckett & The Union Gap’s dodgy Young Girl as School Girl wasn’t a good idea though and works better as an instrumental cut by The Joe Gibbs All Stars. Nicky sings a good version of The Paragons’ Wear You To The Ball retitled Leaving The Ball and Delroy “Lizzy” Petgrave gives us a DJ edit of the same track. The rhythm is also used for an organ instrumental cut Ten Feet Tall credited to Neville Hinds and the Gibbs crew.

Disc two of this collection takes us back to the original Joe Gibbs cuts before additions for the UK pop market, plus various DJ and instrumental mixes of Thomas’ tunes. Like on disc one, God Bless The Children kicks things off, but this Jamaican take is much preferable to the stringed-up UK cut. Round The Clock strips the vocal away and the performance credit goes to The Jogibs All Stars, a variation on the name for Gibbs usual backing band. Lizzy is back to impress with a DJ cut on the rhythm entitled Children Blessing. Finally The Professionals name gets a run out with a cool proto-dub edit. This highlights the producer’s keenness to get the absolute most out of a rhythm, but also the inventiveness of all involved.

Then Rainy Night In Georgia is given an exuberant toasting refit by Lizzy and Gibbs & The Professionals take it right down to drums and bass, before we get the JA mix of If I Had A Hammer. This is another one I prefer to in its less cluttered state, it has great, goodtime momentum to it. This time the obscure Cat Campbell is called on to DJ in an offbeat, near shrieking style. He recorded a couple of other tracks for Gibbs in 1972 and that seems to have been it for him. Another Gibbs instrumental outfit The Love Generation graft a bit of Time Is Tight to the rhythm on their cut Medicine Man and then Nicky’s back with another goodie, the original Turn Back The Hands Of Time.

After another round of instrumental/dub/DJ cuts on the same backing track, we reach the Jamaica single version of Love Of The Common People. Hearing more of the backing and the jumping beat is a boon and confirms what a total gem it is. The sleeve note relates that it it didn’t make much of a impact in Nicky’s homeland, which is amazing really. The tune is then rejigged for organ instrumental purposes by Winston Wright & The Destroyers and is followed by Mama’s Song in its original format. This exposes more of the song r&b base, but for me it is one of the lesser contributions to this collection.

Prince Williams’ DJ cut on the Have A Little Faith rhythm Channel 7 is excellent and dubwise and apparently Dennis Alcapone provides the vocal interjections on Joe Gibbs & The Professionals Faith Version. After the extended take of Don’t Touch Me, which is a good mid-pacer that has a languid, rocksteady-style groove, veteran DJ Sir Lord Comic toasts on the tune which is renamed Doctor Feelgood. Love Of The Common People draws to a close with a decent second take of The Beatles’ Let It Be and it is refreshing to hear a female voice DJ on Red Eye, where the mysterious Delores does a great job.

Sadly when Nicky Thomas got to the UK he didn’t have the success that his talent warranted and although recording widely with a number of local producers, he never scored that second hit. He did however bounce back by recording some popular dancehall tunes in the early 1980s though. The story of Nicky has a sad ending mired in rumour, but what seems to be certain is that he died somewhen in 1990, possibly by his own hand and apparently a broken man. A tragic end for a real talent.

This 2CD set shows a singer blessed with natural ability and charisma who was unlucky in not securing more success – perhaps arriving just at the point the skinhead/boss reggae boom was starting to ebb away didn’t help. Nevertheless there is much to enjoy here and the second disc in particular is a real peach and one that any reggae fan would do well to at least hear. The compilers have done an accomplished job here of bringing together all the associated versions that were made during Nicky Thomas’ short time with Joe Gibbs. The result is a varied, satisfying selection that concisely depicts the difference between the pop reggae tastes in the UK in 1970 and the rougher, but for me more pleasing methods at work in Jamaica. But more than that, it shows Nicky Thomas as a star that deserved to be known for more than by just that one song.