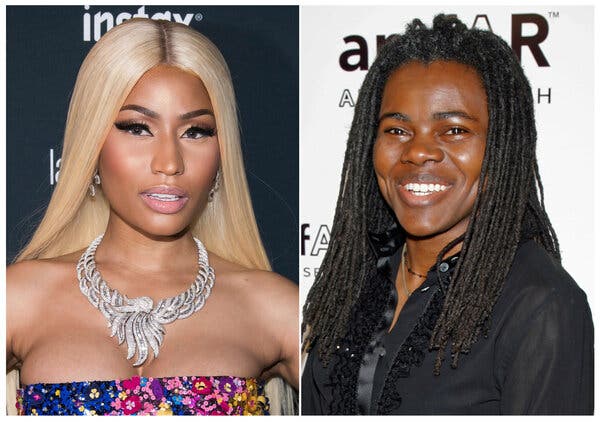 Tracy Chapman filed a copyright infringement lawsuit against Nicki Minaj for ‘stealing’ the singer’s 1988 hit ‘Baby Can I Hold You’.

Singer-songwriter and four-time Grammy winner Tracy Chapman has sued rapper Nicki Minaj for sampling her 1988 track ‘Baby Can I Hold You’ without permission. Minaj was accused of incorporating the lyrics and vocal melody of Chapman’s 1988 single ‘Baby Can I Hold You’ into her unreleased track featuring Nas called ‘Sorry’. The case has been ongoing since late 2018 and has finally come to an end with Minaj being ‘Sorry’ and offering an apology of $450,000 (£332,000) to Chapman. The agreement means there is no need for a trial.

The lawsuit claimed that Chapman repeatedly turned down a series of requests to allow Minaj to sample the song for her fourth album – Queen. And despite stripping the song off her new album, ‘Sorry’ was still played on the radio according to the legal filing. Minaj’s song was never officially released, but it had been played on the radio by celebrity disc jockey Funkmaster Flex on New York radio station Hot 97, and went viral, the BBC reports.

Minaj argued in her defense that ‘Sorry’, even without Chapman’s blessing, was protected by the “fair use” doctrine. That is an exception to copyright law that allows artists to borrow copyrighted material under certain conditions, the newspaper reported.

On summary judgment, U.S. District Court Judge Virginia Phillips ruled that Minaj had a fair use right to use the song in the studio to enable musical experimentation, according to The Hollywood Reporter.

“A ruling uprooting these common practices would limit creativity and stifle innovation within the music industry,” Phillips wrote, setting up a trial to explore the facts surrounding how the song got to Funkmaster Flex.

The judge allowed the case to go to trial over the question of how the song made its way to Funkmaster Flex. Chapman’s side alleged that Minaj had leaked it, and pointed to substantial correspondence between the two. Minaj said she did not send the track, and Funkmaster Flex said that he had gotten it “from one of his bloggers,” according to the judge’s ruling.

If Minaj had leaked the song herself, or authorised its release through intermediaries, she may have been liable for significant penalties. Court papers show that Minaj’s lawyers made their offer of $450,000, “inclusive of all costs and attorney fees incurred to date,” on Dec. 17, and that Chapman’s team accepted it on Dec. 30.

Chapman was pleased with the outcome and the settlement as she said in a statement, adding that it “affirms that artists’ rights are protected by law and should be respected by other artists.”

She continues. “I was asked in this situation numerous times for permission to use my song; in each instance, politely and in a timely manner, I unequivocally said no. Apparently Ms. Minaj chose not to hear and used my composition despite my clear and express intentions.”

Chapman closes off her statement with, “As a songwriter and an independent publisher I have been known to be protective of my work,” Chapman stated. “I have never authorised the use of my songs for samples or requested a sample. This lawsuit was a last resort – pursued in an effort to defend myself and my work and to seek protection for the creative enterprise and expression of songwriters and independent publishers like myself.”

Minaj’s attorney, Peter W. Ross, said that his client “settled for one reason only. It would have cost us more to go to trial.”