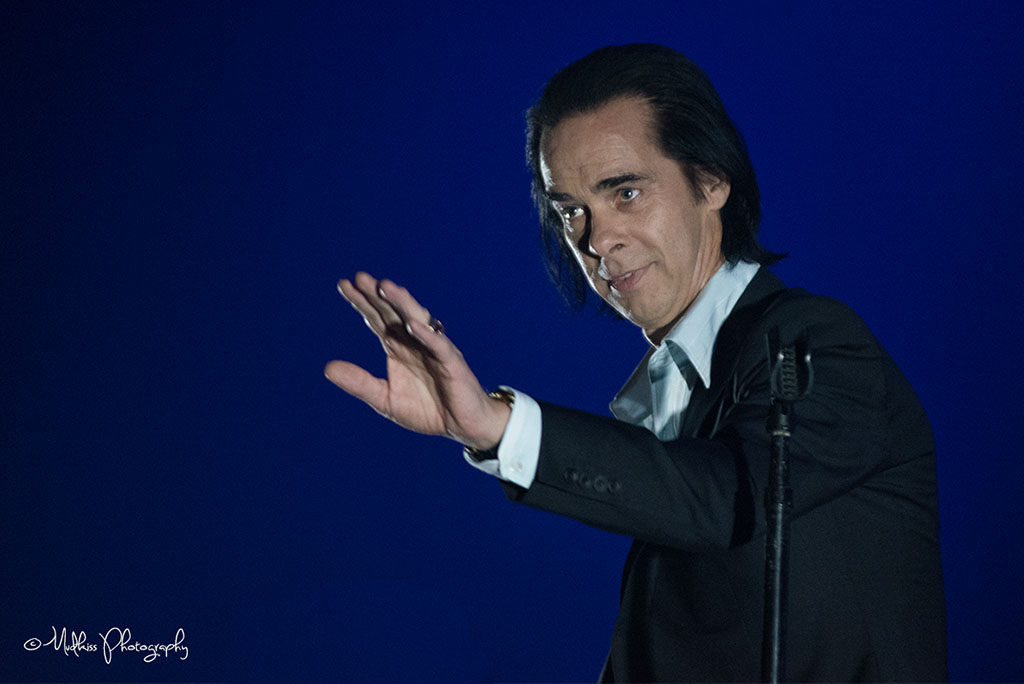 Louder Than War witnessed a truly spectacular show last night and our reviewer David Edwards is in awe and wonder, blown away by the spiritual experience.

Can I truly class myself as a Nick Cave fan? It’s a question I ask sometimes. I suppose so. I mean, I was late getting into him – the kids who were devoted fans and wore Bad Seeds and The Birthday Party t-shirts at school were always so far removed from my social tree – so much cooler and more interesting than me in my Topman Oasis shirt, hair disinclined to fall into any culturally acceptable format. Nick Cave belonged to the edgier, more fascinating people. And sure, there’s so much of his music that I adore without question – I recall continually rotating The Boatman’s Call after a break-up back in 2008. But the same sort of super-fan and devoted population that allows someone from such a leftfield platform to sell out the cavernous Manchester Arena? I was never fully one of them. Outside the door listening intently, but never quite in the main room.

On a curiously warm September evening, all of this changed in the course of two-and-a-half quite extraordinary hours. It wasn’t just that Nick Cave and the Bad Seeds were excellent, it was that they crossed that invisible but barely-attainable line into something quite astonishing, memorable and life-affirming. The same rarefied air that the likes of Bowie and Prince used to soar in, and that the likes of Radiohead and Arcade Fire can reach on their finest days. As a performance, a display of stagecraft and glorious musicianship, this was of the most exemplary standard. 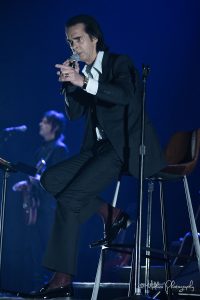 Following an unscripted comic opening exchange where a crowd member yells “I f**king love you”, which Cave responds to with “Glad we got that straight”, the Testament preacher sermon of ‘Anthrocene’ and the eerie chill of ‘Jesus Alone’ seek to both calm and unsettle in equal measure, the piercing harmonic wail of the latter jagging almost physically through the air. No-one has their phone out, no-one takes their eyes off the stage. The foot begins to come down on the pedal with a supercharged ‘Higgs Bosun Blues’ and a storming churn of ‘Tupelo’. For someone uninitiated to seeing Cave live, it is a uniquely transcendent and eye-opening experience. Long-legged and sliver-thin, he prowls the stage like some prowling wolf – exquisite, beautiful and threatening in equal measures. He leaps like a cat from stage to the crowd barrier, leaning continually into the audience to semi-stagedive, promoting clear consternation from the security team as he beckons the crowd to him like a preacher. There is no compromise – only sheer performance. The intimacy of a sweat-drenched club show, somehow expanded exponentially without losing a drop of potency.

There is a choke in collective throats as a heartrending ‘Into My Arms’ shimmers through the arena air. People are visibly wiping tears from their eyes around me, tangible proof of the power of this gossamer-thin masterpiece. But even this is eclipsed by the absolute majesty of ‘Red Right Hand’, which leaves me in unashamed awe. Like a hurricane gathered into a can or lightning condensed in a battery, it unfolds with a limitless power and unstoppable force from a skeletal opening to a deafening roar of sound with Cave himself screaming a howling from the crowd control barrier. In the whole of 2017, I have not heard a single live track better than this. Jaw agape, wordless – I can only applaud this piece of magic. 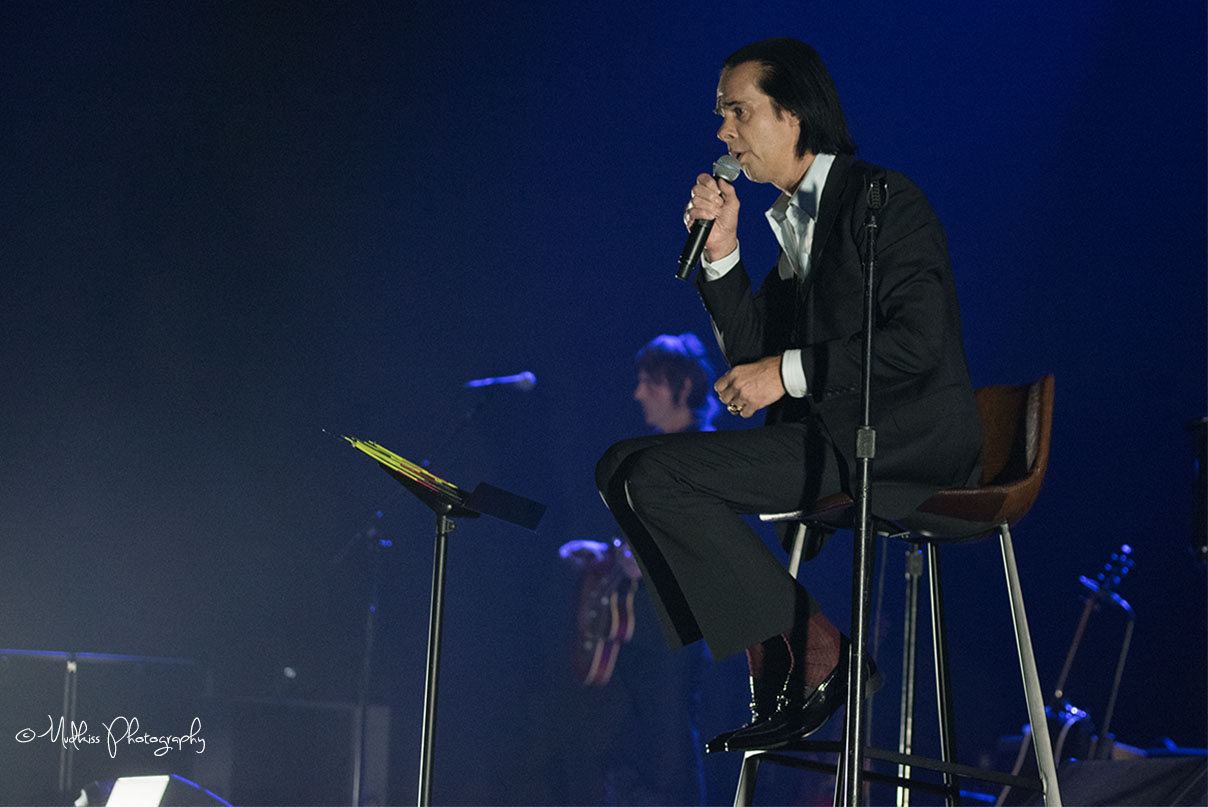 If there is one regret (and boy, am I scratching around for any possible criticism here) it is that there is nothing tonight from the exceptional and under-rated 2008 Dig, Lazarus, Dig!!! but that scarcely matters in the overall reckoning. The scorching ‘The Mercy Seat’ and a sombre, swelling ‘Skeleton Tree’ end the main set, bookending an ethereal ‘Distant Sky’ with Warren Ellis doing extraordinary things on his violin – a eulogy to so many wounded hearts in the audience. But also to his own bandmate – there is a wonderful moment where Cave turns his face away from the crowd during Ellis’s coda, and with a slip of the mask you see a moment of uncloaked sorrow creep across his face. It is a beautiful, soul-touching moment. The Bad Seeds as a whole are a faultless and extraordinary collective – capable of such overwhelming sensitivity and such dark, filthy grit in equal measures. Combined with these songs and their dark angel of a frontman, it is utterly captivating.

As the polar opposite double-punch of ‘Stagger Lee’ (complete with an impromptu crowd invasion for 40-or-so fans) and an elegiac ‘Push the Sky Away’ finally concludes us, the memories of this evening are already seared into the synapses of twenty-thousand people. For Nick Cave to bring himself back to the stage after the heartbreak of recent years is admirable; to conquer tonight with such exquisite and majestic energy is quite astonishing. A band with such grace and skill, a show without flaw, a frontman without peer, an experience I will never forget. I have crossed the line into awe and fandom, after it only taking thirty-six years. Am I a Nick Cave fan? You’re goddamn right I am.

All words by David Edwards. More writing by David can be found at his author archive here.