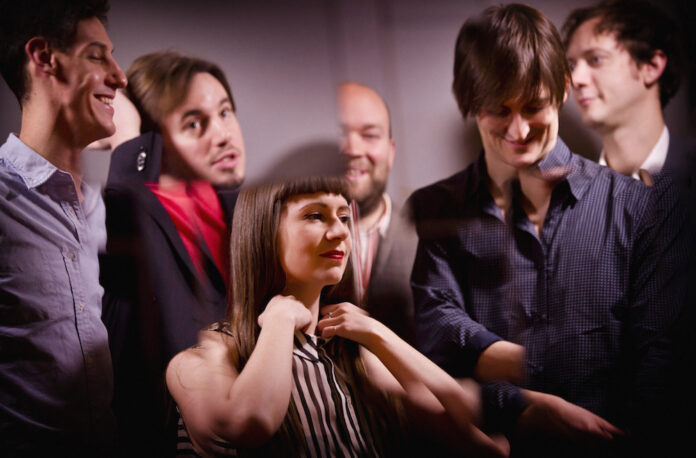 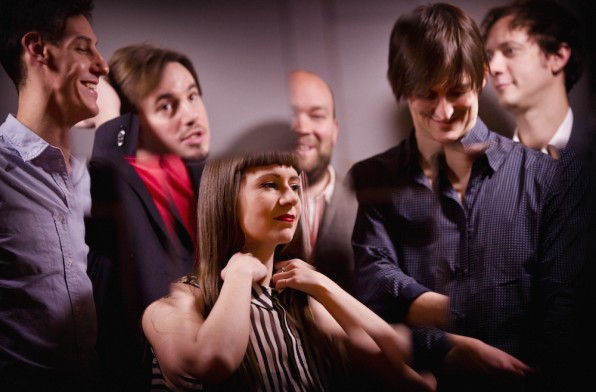 With April 13th not only marking the date that The Leisure Society release their fourth album but also the date they embark on a full UK tour, Louder Than War’s Melz Durston spoke to the band’s front person, Nick Hemming.

Titled The Fine Art of Hanging On and released on Full Time Hobby we’re told the album is the band’s “…most cohesive body of work yet.”

Check out the lead track off the album, Tall Black Cabins, below after which you’ll find the interview…

“‘The Fine Art of Hanging On’ is a recurrent, linking theme on the album, although this wasn’t an intentional concept album”, explains Nick Hemming. “It’s about clinging to something – be that a relationship, a career, or life itself.

“Shepherds Bush Empire is actually my dream venue. It’s big enough to be epic but small enough to have an element of intimacy. When I first moved down to London in 2005 I spent my last £70 on a ticket to see a sold out Sufjan Stevens show. I never usually go to gigs alone but the Michigan album had captivated me so completely I just had to be there. It was an incredible show, worth every penny, and as a result of that, Shepherds Bush Empire has an almost mythical stature to me.”

Talking of the process of recording their forthcoming album, Nick explains:

We recorded the album onto analogue tape at Konk studios and mastered it at Abbey Road Studios. We wanted to make the best record we could, so despite the expense we crafted it in this way – not for money, but for the love of making it.”

Formerly in the band She Talks to Angels, when Nick was a teenager, and latterly with The Telescopes, who were signed to Creation Records, Nick went on to be nominated for an Ivor Novello award and has played at Ray Davies’ own Meltdown festival.

“She lacks in desire, what I lack in direction…” — this lyric could be autobiographical: are you a very passionate person, driven by intuition more than strict direction, especially with your song-writing?

Yeah, with most of my lyrics it was autobiographical. In that line, I was referring to my life as a whole. I knew what direction I wanted to go in but didn’t know how to achieve it: I was striving to be a full time musician but drifting from one dead-end job to another in order to pay the rent. When I’m writing, I’m dependent on that unfathomable moment of inspiration, but I tend to obsess over lyrics for a long time, refining and building on the initial outpouring of creativity.

Alone aboard the Ark was your third and most recent record – how have you evolved as individuals, as well as personally in your song-writing and outlook?  How does this translate on to your new record?

Song-writing and recording is pretty all consuming for me.  I pour pretty much everything into the creative process. As a result of that it can make life pretty one dimensional, so I’m not sure how much I’ve evolved as an individual, probably not a great deal! I’ve often thought I should jack it all in and try to get a job on an oil rig or something. The moment I run out of things to write about, I will.

You composed the soundtrack for A Room for Romeo Brass amongst other films — how does this differ from writing songs for your own albums?  Is there a different process and mind-set that you need to get in?

I’ve only really done bits and bobs, but it’s something I really enjoy. There’s a lot less pressure involved as you’re basically just trying to complement someone else’s vision. You don’t have to worry about writing a catchy melody or the ‘perfect’ combination of words; you’re just trying to enhance a mood that’s already there in the script and on the screen. You’re obviously completely at the mercy of the director and what they want – although they can’t always explain what they want until they hear it – but despite that, it’s immense fun to do.

You worked with American Laundromat Records in 2010, for their Indie Lullabies compilation for kids – Sing Me to Sleep.  Your band covered Inchworm, the Hans Christian Anderson classic — are these projects something you would like to be involved in again, in the future?

I chose it as it’s a song that I’ve loved since I was a kid. It’s got a beautiful lullaby quality, but also a strange darkness beneath it all. We deliberately chirped up the end section as it was recorded for a children’s compilation and we wanted to lighten the slightly sombre beginning of the song. It was great working with American Laundromat, I wish they’d asked us to be involved in their new Wes Anderson tribute as he’s my favourite director!

Do you feel more able to write and perform in certain places as opposed to others?

I feel a certain inspiration emanating from the sea. There are plenty of oceanic references in my lyrics. I think it’s because I love the sea and am terrified by it in equal measure. As far as performing goes, a dimly lit, sweaty room full of smiling faces always works best for me.

You’ve been nominated for an Ivor Novello award — do you feel that your song-writing is propelled by certain sparks of inspiration or encounters? Are there recurring themes that you tend to dwell on creatively?

I can be a little bit nostalgic with my writing, which I feel I should resist. Everything is so visceral, experiences are new and exciting, and they really shape the person you become, so it’s hard not to write about them. I also find I do most writing when I’m unhappy about something. If I’m perfectly content with life I don’t feel the urge to write, but if I’m in a desperate, gloomy mood a song can just spill out before I’ve even realised what’s happening. I guess it’s a cathartic.

What are your recollections from your tour with Laura Marling?

That was an amazing experience – the best history trip ever! Every cathedral was unique and they were all pretty awe inspiring. Acoustically it’s a bit of a nightmare playing in those huge stone spaces, but Laura had some great sound people and on the more minimal songs the massive reverb worked amazingly well. Playing in York Minster was quite terrifying: you sing a note and you can still hear it echoing five seconds later, so you need to make sure it’s the right note!

Is there a place or person in your life that has proved to be a catalyst, or a gold-mine for your own work?

My home town of Burton-on-Trent is something of a creative gold mine. I realised at a show the other day that there are three consecutive songs in the set that are all directly inspired by Burton experiences. It’s quite ironic that it wasn’t until I actually left Burton to live in London that the songs really started to flood out…