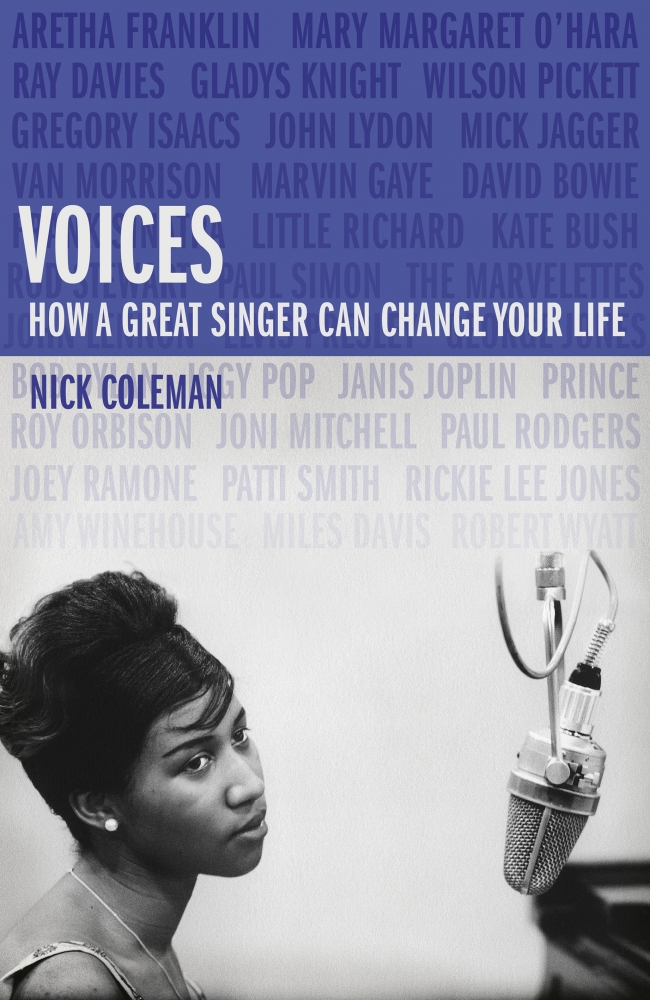 Voices: How a Great Singer Can Change Your Life

I have known Nick since we were both Cambridge semi-punks in the late 1970s. That was largely what we had in common, our semi-punkness – clearly neither of us felt we could wholly commit to the (lack of) cause. Nick’s hair was too long (and unforgivably curly), and his shirts were often open wide at the neck in a way that suggested Tom Jones more than Mick Jones. I only tell you all this – I only mention our connection – because I want to make it clear that it’s just a happy coincidence that I know Nick personally and also happen to think that Voices is one of the best books on popular music I’ve ever read.  Obviously biographies of favourite bands and musicians don’t count, because they can be guzzled up like milkshakes and rarely offer that bit of resistance essential to a fully satisfying read.

No, what Coleman has written here has to be savoured and thought over rather than merely absorbed. I should also add that it is largely free of the kind of dull (apart from to those who were there) anecdotal nonsense of the kind I’ve just relayed above. Nick is not interested in nostalgia; he is interested in how and why some music transcends fashion and time to remain a powerful and necessary aspect of most of our lives. He is interested in its nowness not its capacity to make you think of *that* summer or *that* boyfriend/girlfiend.

If you’re curious as to why you might have preferred the Stones to the Beatles when you had your first feverish musical obsessions as a teenager, you may well find the answer here, while learning something about yourself in the process. I certainly discovered through dwelling on some of Nick’s ruminations, why it was Reed and Bolan who spoke to me, but not him, during those years of heightened perceptions and emotions. Unlike Nick, I was more focussed on the texture and atmosphere of the voce within the context of the overall canvas of the song, rather than  internalising the emotional content of that voice. I didn’t want connection the way Nick did: my glam rock heroes were no more real to me than Tarzan, Superman and The Prisoner’s Number Six and that was the way I like it. My favourite singers had to be stars, had to be enigmatic, had to be Other. I liked to keep them at a distance and for them to focus on keeping themselves distanced from me. But I hadn’t really thought about any of this stuff in quite this way until I read Voices.

But not because Nick gets all neuroscientific on us – this is not one of those tough ‘how the brain works’ tomes – but because he indirectly made me think about why it was Bolan and Reed for me and Aretha and Jagger for him, and he does so in a prose style that brings Martin Amis’s comment on Nabokov to mind: ‘To read him in full flight is the nearest thing to pure sensual pleasure that prose can offer’.

Nick has not only worked on every sentence until it best encapsulates the intangible effect a great 45 once had on him and still has on him, you also know that he has thought at length about why that 45 had that effect, before he even began to tap out those words that best encapsulated the intangibility of the music and his perceptions on it. ‘Voices’ is great because it doesn’t matter if you agree with every bold subjective assertion. You should still derive that ‘sensual pleasure’ from having him tell you what it is about Joni, Gladys, Patti or Prince that does or doesn’t move him. There are no judgements here just: this-is-me, you-may-feel-differently reassurances. There is no snobbery either, in that Quatro’s Can the Can gets as much wordage as Gaye’s Let’s Get It On – and not in a clichéd ‘guilty pleasures’ context either.

Nick is great too on the singers he doesn’t love, particularly Frank. I admire the honest of this. So few music critics question the Gospel of the Canon, or deal with the paradoxical business of knowing a singer is great but not feeling it. In fact crooning in general leaves my old almost-punk pal cold and he’ll tell you why, in great depth, and if you enjoy getting to the bottom of things as I do, you’ll find that fascinating.

Then there’s the fun of discovering music new to you from the book’s soundtrack. I have already sought out a few songs I didn’t know, for the pleasure of rereading Nick’s forensic yet ecstatic descriptions of them as I listened. My favourite so far has been Aretha’s symphony of a song, Oh Me Oh My (I’m a Fool for You Baby) which I realised I had on a four CD box set. I immediately felt guilty for having clearly at some point suffered from Aretha fatigue, and therefore never having given Disc 4 a proper listen. I played the song while reading Nick’s blow by blow description of its measured but increasingly flushed unravelling, and then I listen to it a couple more times. It’s now a favourite of mine too.  So yes, this book can even teach you a thing or two about the difference between listening and merely hearing.

In case you didn’t know, Nick lost his hearing completely in one ear in 2007 and has since had many devastating and frightening on/off problems with the other ear too. So it is no surprise really that his appetite, his *greed* for the soul, jazz, reggae and rock voices and tracks he loves and may one day lose completely, comes across in every burnished sentence of Voices.

Book review by Howard Male whose website can be found here