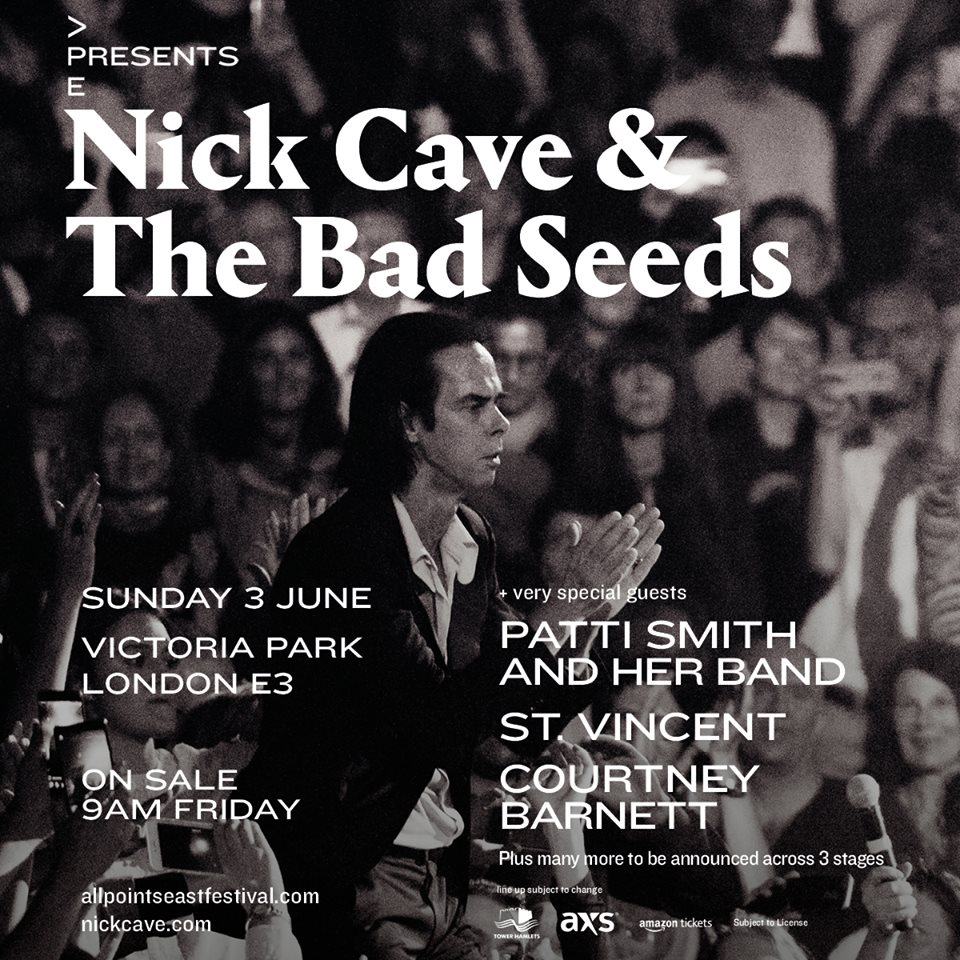 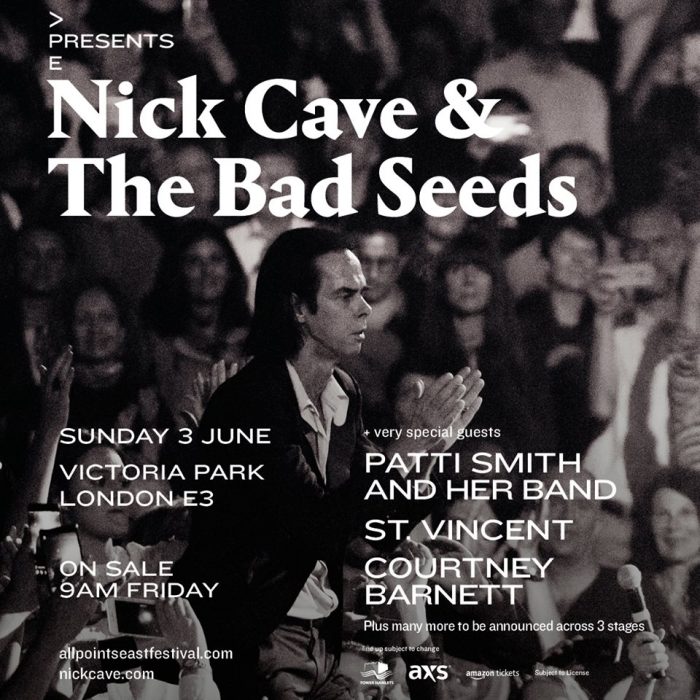 More acts still to be announced

Regarded as one of the most intense and exciting live acts on the planet, Nick Cave & The Bad Seeds’ recent sold-out run of headline shows saw them step up another gear to become bona fide arena headliners, garnering some of the best reviews of their decorated career in the process. Performing their newest album Skeleton Tree alongside the much-loved classics on the recently released, career-spanning compilation album Lovely Creatures, Nick Cave & The Bad Seeds have hit yet another creative and musical peak. They will be bringing their incredible live show to East London’s Victoria Park to headline a UK Exclusive stand-alone APE Presents… concert alongside very special guest Patti Smith and other guests.

Reviews for the UK Shows:

“Joyous and unexpectedly triumphant” The Guardian *****

“An extraordinary response to the unimaginable” The Telegraph *****

“Tense and thunderous at times, tender and cathartic at others. It’s masterful.” i – *****

“A triumphant performance charged with tragedy” The Evening Standard *****

“Nick Cave & The Bad Seeds used to be a great live act. Tonight, they are phenomenal.” The Line Of Best Fit

“A sense of awe rings around the O2 as the Bad Seeds leave the stage, lifetime Cave fans shocked at quite how magnificently the band have mutated.” Loud & Quiet

Few songwriters have had the lasting legacy and impact as the iconic Patti Smith. A major voice in the emergence of the New York punk scene and a formative influence on legendary artists like The Smiths, Madonna, Sonic Youth and R.E.M., she remains a live force to be reckoned with. The singer, poet, author and visual artist will be bringing her band to APE Presents… next June.

Annie Clark, better known by her stage name St. Vincent will be bringing her live band show and acclaimed recent album Masseduction to Victoria Park for what is sure to be one of the stand out moments of the day. Also joining the line-up is the vibrant Australian songwriter Courtney Barnett fresh from the release of her full length Kurt Vile collaboration Lotta Sea Lice.

They join the line-up as part of All Points East, the new ten-day event which encompasses a diverse three-day music festival including headliners LCD Soundsystem, The xx and Bjork followed by a 4-day community-focused midweek programme of comedy, food, outdoor cinema and more to reflect the vibrancy of the park’s surrounding area. The event culminates in three huge APE Presents… shows with Nick Cave & The Bad Seeds headlining the event on Sunday 3rd June 2018, the Saturday headlined by Ohio indie rockers The National and Friday night still to be announced.

Tickets for APE Presents… Nick Cave & The Bad Seeds go on sale at 9am on 1st December from www.allpointseastfestival.com.