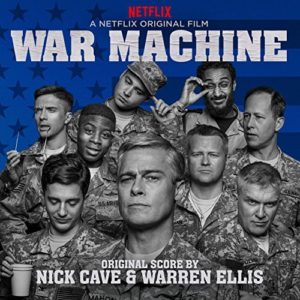 Since 2005’s The Proposition, Nick Cave and Warren Ellis have created a slew of unique, diverse and enthralling scores for film, theatre and documentaries. Never settling on one “sound” each project has shown a new side to the duo’s personality and their continued desire to progress. War Machine sees them score the new Netflix-only film War Machine starring Brad Pitt. Simon Tucker reviews.

There’s Nick Cave & the Bad Seeds. There’s Grinderman. There’s Dirty Three. Then there’s Nick Cave and Warren Ellis. Each of these contain many of the same players but each are treated as separate entities. There’s some inevitable similarities due to the personnel involved for sure but with each project you get a distinct separation. One project may have an influence on another in terms of writing style or production technique of course but you can always hear a marked difference in terms of the finished work’s overall feel and use of sounds. War Machine is no different. Yes, you can hear some similarities between this and the last Bad Seeds album (Skeleton Tree) but whereas that album was more music as catharsis, this is music as propulsive introspection. Over its running time we are treated to a soundtrack that has a deeply embedded sense of drive and motorik ambience. Cues may at first listen seem to float and drift but on further listens you can clearly feel the pulse that often rides and recedes like a wave creating a sense of uplift and gentle fall.

Of all the tracks on the album it is Humble Man and Hand of Helping that most sound like they could have appeared on the aforementioned Skeleton Tree. The deep drone, static, and pulses that were prevalent on that album are all present and correct but on here they are given more of a positive emotional clout. For the rest of the album we are treated to a Cave and Ellis strolling through 60’s/70’s Berlin absorbing the burgeoning electronic and ambient scene and rushing forth to present day to present us with their new and updated take on the genre.

On opener Ah America we hear the distant cousin of Bowie’s famed Berlin period and Eno’s revolutionary first steps into ambient music. Thousands of Parades, All over America is the seedier and more disturbing aspect of a a divided Germany writ large as it lulls you in slowly before it bursts open on chest-cracking slabs of drone and knockout punches of percussion. It’s the most disturbing thing here and it is also the highlight of an album swallowed in highlights. When the voices appear it is as ghosts, textural and nuanced adding further ebb and flow to the piece.

War Machine not only delivers original music by Cave and Ellis but intertwined with their contributions are a handful of songs by famed German musician Hans-Joachim Roedelius (Cluster/Harmonia/Aquarello). In total there are four Roedelius songs included here and they are all taken from his third solo album Selbstportrait (1979). By including these songs, Cave and Ellis help frame their own contributions by given it an historical reference and deserved nod to influences whilst also highlighting their skills at taking a base point, embellishing it, bringing it to the now and progressing that sound further into the future. The best case of this is on Marjah which takes the sense of innate paranoia that was deep in the mix on those early German compositions and makes it the star of the show. Marjah is deliciously disturbing slathered in drumming feedback and shattered glass.

War Machine is not only one of Cave and Ellis’ finest scores but one of the best things the duo have ever created in all of their myriad of projects. It is a beautiful, twisted listen that has a real sense of perpetual motion. A sensational score made by two people who are at the top of their game. In time it will rank highly on fans’ and critics “best of” lists when discussing the work of the duo.