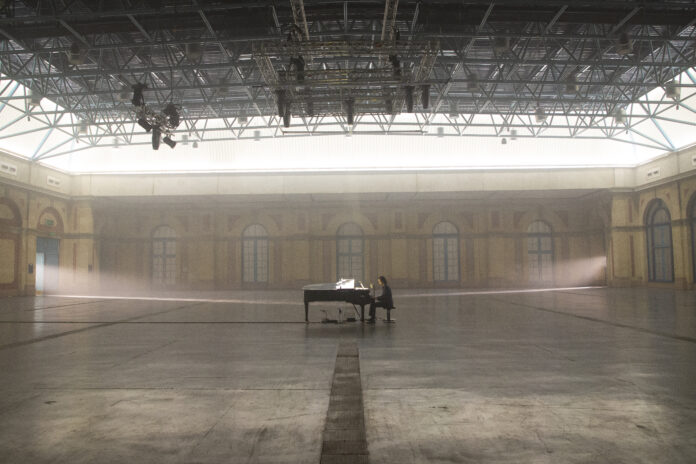 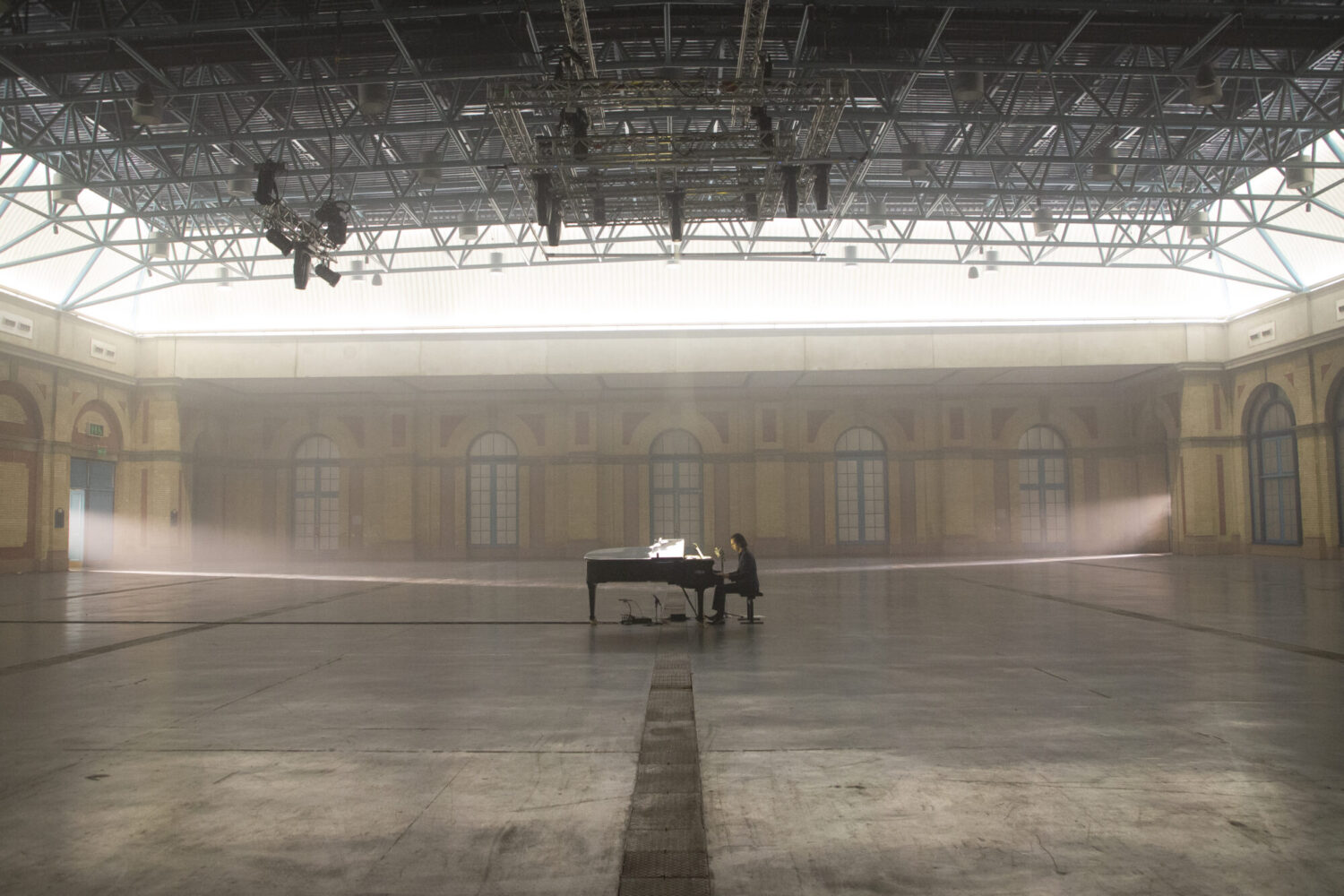 One man, a grand piano and a collection of magnificent songs. Idiot Prayer is a beautifully shot, wonderfully performed performance and it more than fills the void left by the absence of conventional gigs. On 23 July, there is one chance to see this unique and special performance by Nick Cave and you should take it. Gordon Rutherford reviews for Louder Than War.

We are all in the throes of reshaping our lives. Coronavirus affects everyone, including the Gods of Rock n’ Roll. For Nick Cave, it means replacing the scheduled world tour with one single performance, filmed in Alexandra Palace’s stunning West Hall. There are no Bad Seeds. Just Cave and his piano.

In the build-up to this momentous and unique event, there are two questions racing through my head. Firstly, his solo Conversations tour last year could now be viewed as the ideal dress rehearsal for this show. In fact, Cave has described Idiot Prayer as something that evolved directly from Conversations. Except, it’s not. There will be no questions from the audience tonight, because there is no audience. That’s important. In Nick Cave’s candidly personal docudrama, 20,000 Days on Earth, he discusses his relationship with audiences as he chauffeurs Kylie Minogue on a rainy late night drive. He details the psychodrama that occurs between him and the people in the front row. He talks about the intimate nature of that relationship and how he feeds on it. That’s where the energy, the transformation, comes from. Where can he feed tonight when he is all alone?

Then we have the Ghosteen question. His latest album is undoubtedly his most ethereal, most celestial collection of songs. Upon first hearing these tantalising and delicate charms, I wondered how they would translate into a live setting with the Bad Seeds. We were, as referred to earlier, scheduled to find out this spring. That was before the plague descended. Now the Bad Seeds are removed from the equation, the outcome changes again. But it remains a source of fascination.

We don’t have long to wait. The show opens with a voiceover of Cave speaking the words to Ghosteen’s haunting opening track, Spinning Song. His rich timbre reverberates as he makes his way through the corridors and stairways of Alexandra Palace; past renaissance murals and iridescent stained glass. It’s the perfect setting, accompanied by the perfect words.

Nick Cave enters the West Hall and takes a seat in silence at the grand piano. With no introduction, he launches into The Boatman’s Call’s Idiot Prayer. The piano resonates and fills the room. The voice sings the first line and it is magnificent.

A warm orange glow illuminates his music stand. On the floor, lies discarded reams of music paper. Abandoned ideas or songs to come?

It’s an eclectic set that comprises a few obvious choices and several surprises and it’s one of the latter that follows. Sad Waters, from Your Funeral, My Trial, may not be predictable, but its longing and woe works perfectly here and sets the scene for Brompton Oratory. Within the first few bars you conclude that Cave’s voice has never sounded so good. Nor has he looked so handsome. Age suits him.

A glorious Palaces of Montezuma follows. The Grinderman song was a surprise inclusion on Conversations’ setlist and it makes a very welcome reappearance here. Find someone to make you promise the way Cave does when he sings “the hanging gardens of Babylon/Miles Davis, the black unicorn/I give to you” and your life will be entirely fulfilled.

Then it’s into Skeleton Tree’s stand-out track, Girl in Amber. It’s a song made for this set, Cave’s vocal phrasing ascending and descending with lines careering into one another, all backed by utterly flawless piano playing.

As he progresses through Man in the Moon, Nobody’s Baby Now and (Are You) The One That I’ve Been Waiting For, you are struck by how minimalist everything is. There is no drama. There is no movement, no gimmicks, no tricks of the light or slideshows. This is just one man singing and playing a grand piano. But it transfixes you, holding you spellbound.

There is a lovely human touch at the end of (Are You) The One That I’ve Been Waiting For when he smiles and laughs. We don’t know why. Perhaps it’s the duff chord he hits at the song’s close. But it’s a lovely moment. 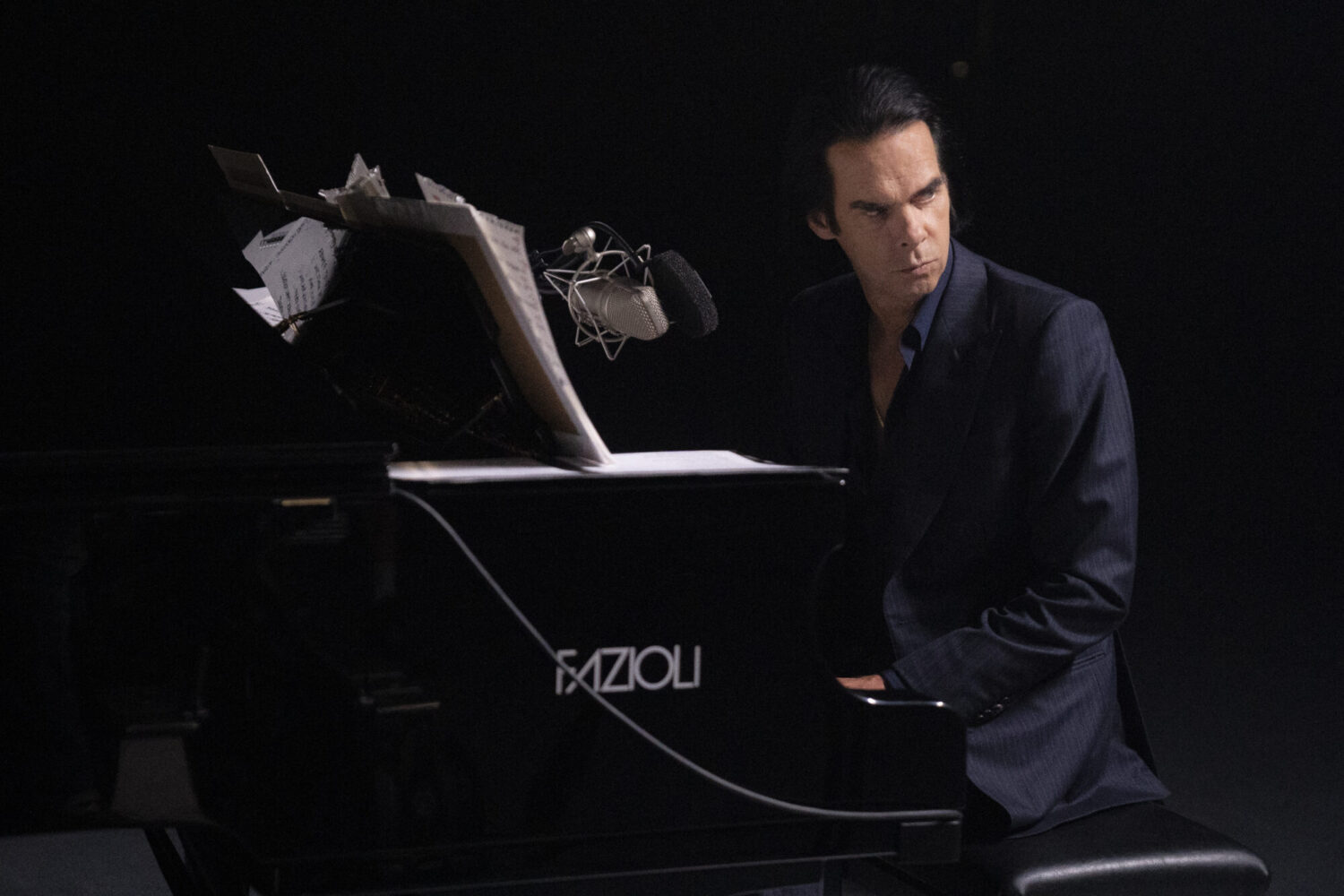 That leads us to the first Ghosteen song proper, Waiting For You. Musically, it sounds made for this environment, but for the first time, Nick Cave’s voice wavers and struggles slightly with the register. We can forgive him that.

From there, it’s into The Mercy Seat. There are many versions of this crowd pleasing classic. Personally, I prefer the stripped back version that we receive tonight. Somehow it seems more sinister, with Cave’s intonation regarding “that filthy five” destined to send you off to bed with the certainty of nightmares. Despite the absence of the Bad Seeds, the power of the performance creeps up on you as it progresses until that incredible denouement.

Like a shaman, Cave draws you in as he emphasises the menace of The Mercy Seat. You feel as though you are sitting on the stool at the other end of the piano, hanging on his every word. And you are struck that this is surely the most intimate thing, almost as close as being there in person. All credit to the cinematographer, Robbie Ryan, who has created that sensation.

We are now entering the home straight and the intensity of The Mercy Seat is about to be increased. Before we get to that though, there is (I presume) a new song called Euthanasia. It sounds like a track that would be very much at home on Ghosteen.

That leads into Jubilee Street. That hypnotic piano riff grabs us and mesmerises us. With naked aggression, Cave spits out the lyrics. Now we know the answer to one of our earlier questions. He doesn’t really need an audience at all, the necessary motivation and energy comes from within the songs themselves.

Far From Me and He Wants You precede a majestic Higgs Boson Blues. It’s emotive and spellbinding. It’s dizzyingly, dazzlingly brilliant. Like a sorcerer, he holds us enrapt. That Southern Gothic epic, Stranger Than Kindness, follows. It’s stripped back, but don’t be lulled into a false sense of security, it remains incendiary and threatening.

Into My Arms is the fifth song from The Boatman’s Call, making it tonight’s most heavily featured album. As he sings this most beautifully composed love song you are struck that those songs were born to be performed in this way, in this setting. It’s no surprise that this particular album should feature so heavily tonight.

The Ship Song is as moving as always, then it’s another surprise. I couldn’t really imagine Papa Won’t Leave You Henry in this setting, but it works brilliantly. It starts off sparsely and understated. It’s transformed, but it morphs and shifts shape into something more akin to the frenetic original. It’s as dark as midnight, it’s saturnine and baleful.

Another Boatman’s track follows in Black Hair and then we have our finale. Galleon Ship is the third track from Ghosteen and, unlike Waiting For You, it is quite spectacular. Cave sings those poetic lyrics illuminated in sumptuous purple lighting. The mood has changed. It’s time to close it down.

After the last note is played, he rises from the piano and walks back out of the room, into the light streaming in from outside. It is over.

Cave has positioned Idiot Prayer as the “luminous and heartfelt climax”, the final film in a trilogy that began with 20,000 Days on Earth and continued through the heart-breaking One More Time With Feeling. It differs from both of those films in that this is a straight-ahead performance of some of his most special songs. However, he seems to see it as some kind of closure to a period in his career. As always, it will be fascinating to see where he goes next.

The final word must go to the makers of Idiot Prayer. Undoubtedly, the film itself is a work of art with Nick Cave, obviously, the star of the show. But a bucketful of credit must go to Robbie Ryan and editor, Nick Emerson. It looks and sounds glorious throughout and it’s clear that they have created something special here. It’s something that everyone needs to see.

All photos by Joel Ryan