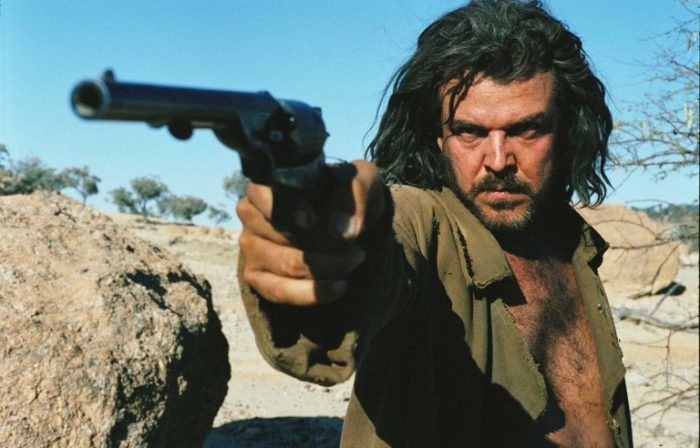 With one foot in the arthouse and the other in the slaughterhouse, Australian Western The Proposition, adapted for the screen by none other than Nick Cave, was being hailed as an instant classic upon its release in 2005. Louder Than War’s Ian Johnston investigated.

“It always reminded me of an extended murder ballad or something like that,” says internationally celebrated Australian rock musician Nick Cave of his script for the uncompromising and savage Australian Western, The Proposition. “The script was approached musically, I would say. The landscape also kind of spoke to me, happily, in much the same way that I write anyway…. which is about violence and sadness, I guess. Which is what the film ended up being; sadness punctuated by extreme violence. I guess that’s what I do, isn’t it, sonny?”

Set in the savage Outback of 1880’s Australia, Cave’s script revolves around a simple but highly original plot, unfamiliar from any previous scenario. “I should bloody well hope not” interjects the dapper 48 year-old singer, wearing a slate grey suit with lavender pinstripe, chocolate brown shirt, colourful stripped socks like those worn by the late John Lee Hooker and a gleaming pair of ox blood loafers. He also sports a striking handlebar moustache (grown for a role as a “singing cowboy” in Andrew ‘Chopper’ Dominick’s The Assassination Of Jesse James By The Coward Robert Ford) and eats baked beans straight from the tin, sitting opposite your correspondent at the dining table of his well-appointed West London town house.

In Cave’s scenario Bushranger outlaw Charlie Burns (Guy Pearce) is offered a deal by his English captor Captain Stanley (Ray Winstone) – unless he hunts down and kills his unhinged elder brother Arthur (Danny Huston), his younger brother Mikey will be hung on Christmas Day. Staggering bloodshed, extreme torture and misery for all inexorably ensues.

“Did that come to me all on my own? No son, I only have second hand ideas….,” mutters Cave in a feigned aggrieved tone. The harsh, nightmarish world of The Proposition carries echoes from Cave’s songs with The Bad Seed, his band of the last 21 years, his first band, the anarchic The Birthday Party, and the ‘mythic South’ of his compelling 1988 novel, And The Ass Saw The Angel.

Fellow Australian John Hillcoat directs the Proposition. For many years Cave has enjoyed a very successful creative relationship with Hillcoat – co-scoring and receiving a co-writing credit on Hillcoat’s powerful prison film, Ghosts …. of The Civil Dead, also co-scoring his 1996 contemporary melodrama, To Have And To Hold. Hillcoat has also directed nine inventive promo videos for Cave’s Bad Seeds over the past 15 years.

The idea for the movie evolved five years ago, while Cave was recording his No More Shall We Part album in West London, filmed by Hillcoat for a DVD documentary.

“John Hillcoat has been talking about making an Australian Western ever since I first met him,” Cave enthusiastically relates. “Before the film Ghosts…, which was 17 years ago. And he always wanted me to do the music. And for 17 years we talked about what the music was going to be like. But he never got a script together. Eventually, he did get a script together but that was basically an American Western that had been dumped in Australia. It wasn’t written by an Australian. He didn’t like it, I didn’t like it. So, John asked me to write it. While we were mixing, I came up with the basic story. By the time we had finished mixing, I had the basic premise and story down. He gave me the broadest of briefs: to write an Australian Western, set around 1880. John wanted to take a look at the Aboriginal people, English-Irish tensions, all that sort of stuff, but I was pretty free to do what I liked.”

Cave’s first draft script was written in just three weeks. The Proposition works against all the conventions of the traditional American Western, reinvigorating a genre that has gasped for life since the mid-1970’s.

“The main thing that we wanted to bring out, I guess, was the essential difference between the Australian West and the American West,” explains Cave. “The Americans see their past heroically and that these people were heroes. The Australian history is a history built on failure and ineptitude.”

The film does share the atmosphere of a Peckinpah or Leone Western; the sensation that extreme violence will erupt at any moment.

“They were certainly an inspiration for Johnny,” Cave admits. “More the way the violence was filmed. In the script it actually lingers. For instance, during the whipping scene in the script, arcs of blood are spraying the front row and so on. To his credit, he went for a much quicker, more brutal approach. Get it down, get it over and check out the consequences rather than the violence itself.”

Guy Pearce was the only cast member Cave envisaged while writing the script. “That’s because we wanted someone who could play somebody who was pretty much all internalized,” imparts the writer. “All on the face of Guy. Especially in films like LA Confidential and Memento, for example, he’s just wound so fuckin’ tight in those movies. To me, he’s just amazing in The Proposition.”

It was Cave’s script that drew Guy Pearce in; “Nick is a wonderful writer of literature and music. He is also delightfully specific and this script was no exception. Cave wasn’t on set for the seven and a half week shoot but did attend a very fruitful week of rehearsals with the cast on location in Winton, a remote small town in north-western Queensland, Australia.

“Did Nick mention my near death experience?” asks John Hillcoat, on the line from Sydney, Australia. “The roads were very treacherous…. this is literally one week before the shoot, I went out on location. We went into a spin and rolled the vehicle several times. The whole car was written off. They thought I’d broken my neck. I was immobilized and sent to a mining camp with the art director, to have all these scans. Luckily, I didn’t break my neck. I checked out, as everyone else did, which was miraculous because the car was just crushed. Twenty-four hours later there was a charter flight carrying the main cast, Guy, Ray, Emily Watson and Nick. I was in a neck brace, had a black-eye, a huge gash across my head and that’s how I greeted them getting off the plane.”

With ferocious temperatures sometimes reaching as high as 57 Celsius on set, the shoot proved to be a very tough ordeal. Dust storms blew through the frontier town set, torrential downpours of rain turned the main street into a sea of mud and both cast and crew had to learn to cope with swallowing flies, but everyone pulled together for the film. Inevitably the crew needed some release and the only action in Winton lay within its large pubs.

“Normally we just had Sunday off and everyone was just so exhausted they couldn’t drink too much,” recalls Hillcoat. “Where as when we did have one full weekend off, all hell broke loose. The camera car literally rolled in the middle of the town, on the main road. It was found, upside down, abandoned because everyone was over the limit. The police got really freaked out. They were threatening to fingerprint the crew. But Ray Winstone was like a force of nature. He won them all over. When the cops came around on set, Ray took them aside and did all these poses with his period guns. And they all pulled out their guns, took snapshots of each other. He’d also gamble. Ray would bet on the horse races and win up to five thousand dollars. Then it was an open tab at the bar for the whole town. Ray…. he could have been the Mayor of Winton.”

Filming completed, Cave composed a moving modern semi-acoustic score, with fellow Bad Seed and The Dirty Three violinist Warren Ellis, in only four days. “Johnny didn’t want any period music in it…. and not to have any rock songs either,” recounts Cave, rolling a cigarette. “I guess the initial reference, although the score sounds nothing like it, was Dylan’s score for Peckinpah’s Pat Garrett And Billy The Kid. It was the way that was actually recorded – he obviously sat around with some people and banged out some bits of music and then placed it onto the film later on. So we went in and recorded slabs of music.”

Hillcoat and Cave enjoyed the experience of working together again so much that they have formed their own company, Titan Films. Another script by Cave, written in two and a half weeks (“I’m getting faster”), will be Titan’s first production. And the secret of their successful partnership? “He lives nearby,” is Cave’s deadpan rejoinder. “He lives up the road in Brighton. Despite what people say about Brighton, it’s a little thin on the ground in terms of people you can collaborate with.”

This interview was first published in Total Film, March 2006, Issue 112.