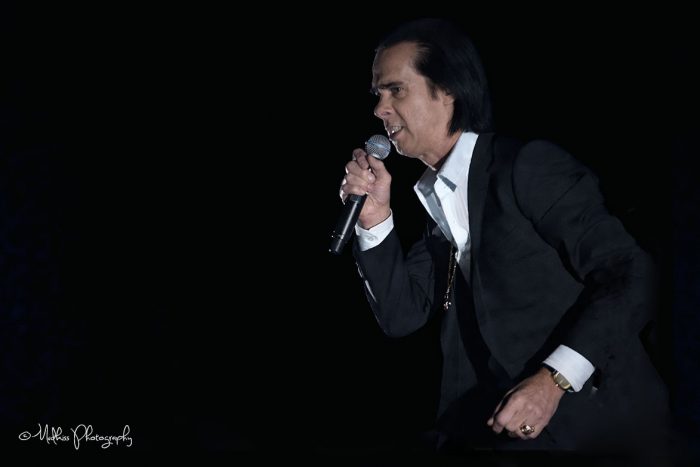 Nick Cave & The Bad Seeds played the sold out Arena on the Greenwich Peninsula to an electrified audience. Kristiina Treganna Malinen was there to experience a moment of Caveism.

Never would I have imagined back in the eighties, that Nick Cave would end up playing arenas, filled with tens of thousands of people. But I´m here, at the 02 in North Greenwich, and the place is absolutely packed- look up, left, right, down, people are everywhere, and they are all here to see this thin, pale man and hear his songs about death, love, America, and religion. This is a religion. Call it Caveism.

This is not an ordinary review of a gig, no – it is definitely not one of those. It is written by someone, who was a rebelling, angry teenager in the eighties and saw Nick Cave as the perfect portrait of a black lipped man with kohl eyes and a sombre goth punk look about him. The look that we all found desirable back ten and that we all wanted to copy. His music I found a bit too artsy for my liking back then, I think. I knew about dark post -punk group The Birthday Party and later The Bad Seeds, but never really examined their music too thoroughly.

The first time it really hit me was when I was a young adult, in the middle of a tormenting break up of a relationship that had not been such a happy rollercoaster ride itself. 1996. Murder Ballads. I remember dwelling in the duets he sung with PJ Harvey and Kylie Minogue, and loving Stagger Lee. Since those days I have cherished his music, though still… the look… he never lost that either. Then of course I read about his personal tragedy, the loss of his son, and as a mother could relate to what he was going through and felt crushed for him.

I have been listening to Skeleton Tree a lot, admiring his capability to pour his sorrow and anger out into those deeply personal and touching songs. I think the album is a masterpiece, on the same level as Bowie´s Black Star, and that from me is a lot to say as I’ m riding on the waves of huge emotions where the timeline is getting blurred. Nick Cave is walking the stage with his black patent shoes in his trademark black suit, like a slinky feline on a prowl and the atmosphere in the arena is instantly electrified from the first moment of ‘Anthrocene’. 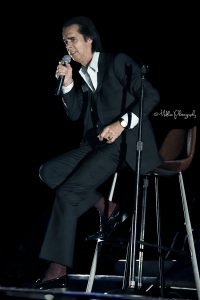 The Bad Seeds are playing their part beautifully – the music is an incredible world of sounds that collide and come together, forming something nearing perfection. On the screen we see a posterized black and white image of Nick Cave. In front of the crowd he is for real – moving, singing, talking to us with his deep voice straight from his heart, sometimes only whispering, seemingly feeling the atmosphere he has created, and giving himself into the hands of his audience, literally.And the audience is in awe.

Brilliant songs are following each other. We hear a few more from Skeleton Tree, then some classics like ‘Magneto’, ‘Higgs Boson Blues’, ‘From Her To Eternity’, ‘Tupelo’ and ‘Jubilee Street’. During these, palm trees can be seen wailing in the wind on the big screen and reflections of the remains of the burned Brighton West Pier, all in black and white. My first highlight of the gig comes with ‘Into My Arms’. I find my eyes fill with tears and I feel heartbroken and happy at the same time. Such a strange feeling it is, but I know this song has touched me so deep tonight that the moment will stay with me forever. I´m singing with him when he sings and my cheeks feel hot.

In between is ‘The Girl In Amber’, and I don´t belittle her at all, but it is followed by ‘I Need You’. God, I love these songs.‘Red Right Hand’ and ‘Mercy Seat’, some almost joyous rage and fury to tame the sorrows, but the best is yet to come.
‘Distant Sky’. What a gem of a song. The angel like voice of female singer Else Torp fills the room, and we see her on the screen, singing: “Soon The children will be rising, will be rising, this is not for our eyes”. I feel shivers going down my spine. I still don´t know if she really is there at all, or singing to us from cyberspace. I try to spot her, but can´t. The name song of ‘Skeleton Tree’ seems like a perfect ending to the gig, but encores follow.

‘Weeping Song’ brings The Bad Seeds back on the stage with their leader, and the show continues with Stagger Lee. Suddenly the stage is full of people that have miraculously climbed up from the audience with no-one trying to stop them. There must have been an invitation. Singing with him the horrific lyrics is the almost cheerful audience, but at this point I unfortunately have to get up and get going. To me the night has ended too soon , because I have to work the next morning and want to make my way home before 20000 + emotionally charged souls emerge from the arena to fill the tube. It has been a magical night and I regret not witnessing Nick Cave & The Bad Seeds being joined by Bobby Gillespie to ‘Push The Sky Away’.

I´ll surely be looking for my black lipstick when I get home.

All words by Kristiina Treganna Malinen. This is Kristiina’s first piece for Louder Than War.