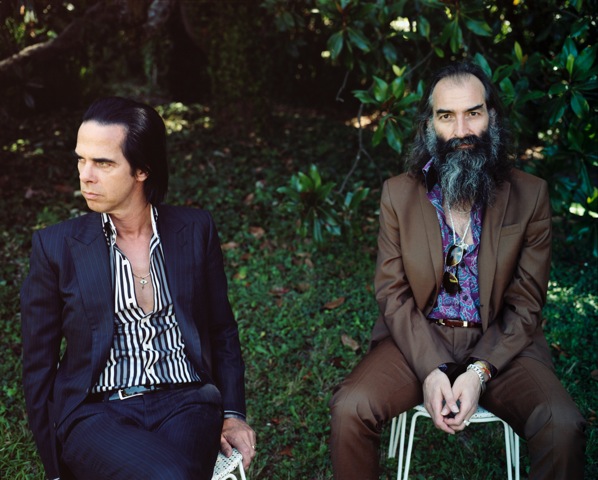 Nick Cave and Warren Ellis have scored the soundtrack to  David Olehoffen’s new file Loin Des Hommes (Far From Men) which is released through Goliath Enterprises on May 18th. Watch a trailer featuring original music from the film above.

“Very often a tension can happen between music and picture that is about chance and a kind of unknowingness that can be really amazing. Just by putting together two things that were created in isolation, music and film, suddenly something quite magical can happen.” – Nick Cave

Loin Des Hommes was a triple prizewinner at the Venice film festival (2014) and stars Viggo Mortensen and Reda Kateb. Adapted from a short story by Albert Camus, it is a powerful tale of divided loyalties and colonialist violence during Algeria’s war of independence. With its mesmeric drones, pointillist piano jabs, weeping strings and nerve-jangling electronics, this is one of the duo’s most emotive and experimental soundtracks to date, sounding both achingly intimate and cosmically vast.

Nick Cave and Warren Ellis create film and theatre scores that are elegantly minimal, hauntingly beautiful and instantly recognisable as theirs alone. Full of light and shade, creeping dread and inconsolable yearning, these heavily instrumental sound paintings inject aching humanity into ghostly frontier towns, parched desert vistas and post-apocalyptic war zones. Most are built around the duo’s intertwined piano and violin melodies, with sporadic use of guitar, flute, mandolin, celeste, percussion and other elements. Vocals are rare and sparing. But even without lyrics, they are always lyrical.

While Cave and Ellis have played together in the Bad Seeds and related projects since 1995, their shadow career as score composers only blossomed a decade later. The duo created their first suite of cinematic soundscapes for The Proposition (2005), directed by fellow Australian and frequent collaborator John Hillcoat. Scripted by Cave himself, this brutal Outback western starred Guy Pearce, Ray Winstone, Emily Watson and Danny Huston. Bedded in looped violin motifs, these widescreen instrumentals and hushed ballads evoked the parched majesty and sweltering savagery of the story’s elemental desert setting.

According to Cave, discovering Ellis’ deep archive of violin loops was a revelatory tipping point, laying the foundations for the duo’s unorthodox composition methods. “It was suddenly an amazing way to write because you didn’t have to do things from scratch,” he explains. “Warren would put on a loop that would create this instant atmosphere, and we could go off and work on top of that. To sit at a piano, put chords onto a linear loop and make something out of that is just an easy and very pleasurable way to work.”

Cave and Ellis followed The Proposition with a trio of kinetic theatre pieces for the much-feted Icelandic actor-director Gisli Örn Gardarsson: Woyzeck (2006), Metamorphosis (2006) and Faust (2010). Their speedy composing techniques allowed them to take risks on this kind of left-field production, where raw creative energy takes precedence over budget. They also added plaintive tones and drones to two acclaimed documentaries: Geoffrey Smith’s The English Surgeon (2007), about an exiled doctor’s struggle to bring modern neurosurgery to post-Soviet Ukraine, and Matthew Watson’s The Girls of Phnom Penh (2009), a compassionate portrait of three sex workers in Cambodia.

Meanwhile, Hollywood began to take an interest in the shape of Andrew Dominik’s elegiac anti-western The Assassination of  Jesse James by the Coward Robert Ford (2007), starring Brad Pitt and Casey Affleck. Because of post-production delays, the score was composed before Cave and Ellis saw a single frame of the finished film, and yet these sepia-tinted sound paintings and retro-rustic ballad proved a perfect fit for Dominik’s visually sumptuous psychological study of hero worship and homicidal stalking in the Old West. Cave even played an acting cameo, as a yelping saloon-bar minstrel.

Between film scores, the duo’s freeform working methods increasingly began to bleed into their rock-band day jobs with the Bad Seeds, Dirty Three and especially Grinderman. “Initially with The Proposition we would sit there and make hours and hours of music,” Ellis recalls. “Then that sprawled into the way we started doing the Grinderman stuff. It felt like there was a way to take that stuff into the bands, or form a band based around that approach. The score work always felt like it was asking to go to places that the bands weren’t.”

Cave and Ellis reunited with director John Hillcoat for his sombre adaptation of Cormac McCarthy’s dystopian novel The Road (2009), starring Viggo Mortensen as a loving father guiding his young son across the ash-strewn ruins of a post-apocalyptic America. Their artfully minimal score combines mournful piano with clanging industrial percussion, heartsick longing and lurking malice. An anthology album of the duo’s film music to date, White Lunar, was also released in 2009.

After contributing to Everardo Valerio Gout’s award-winning Mexican crime thriller Days of Grace (2011), Cave and Ellis composed a full score for Amy Berg’s true-life documentary West of Memphis (2012), about a notoriously controversial murder case in Arkansas. The duo then changed musical gear for their next John Hillcoat collaboration, the blood-soaked Depression-era bootlegging thriller Lawless (2012), starring Tom Hardy and Jessica Chastain. Cave adapted the screenplay while he and Ellis assembled a wilfully anachronistic selection of bluegrass cover versions, performed with a supergroup ensemble of vocal legends including Willie Nelson, Emmylou Harris and Mark Lanegan.

Loin Des Hommes is released on Goliath Enterprises May 18th 2015.

The soundtrack can be pre ordered here: