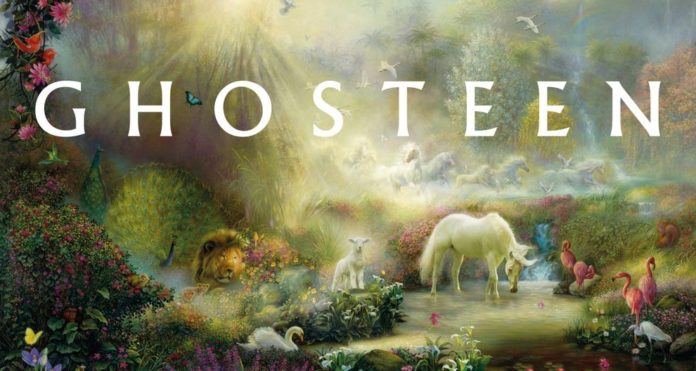 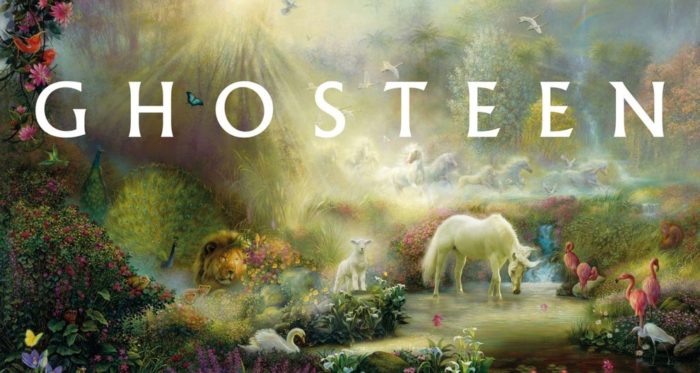 Nick Cave finds an emotional honesty and a powerful divinity on this stunning new album that deals in harrowing grief, life and death and all the big themes that only a true artist can embrace over a subtle shape shifting darkly ambient soundtrack.

In the middle of this stunning album and the whole world melts away. Ghosteen drips melody like the permanent rain. It oozes emotion from a heavy heart. It embraces the frailty of the human soul. It’s full of poetry and images that switch sometimes from the time honoured embrace of Elvis and Jesus and the icons and articles of faith whether they are god or rock n roll to a yearning deeply soulful of a very personal heartbreak with a powerful honesty and lyrical nakedness reflecting a genuine  darkness and intimate honesty that is a step deeper into the personal and the intimate that is compelling and hypnotic and with an almost ambient atmospheric music to match.

The soundtrack sees it strip the music away to almost classical melodies floating with an ambient dread with pianos and occasional oozing choirs, it’s ambitious and gorgeous and daring and bold and and full of wisdom, heartbreak and images of god and nature and life and death and all the heavy stuff that only the truly talented dare to embrace.

Life has dealt Nick Cave and his family a cruel hand and his reaction has been a very public battle with grief and heartbreak played out with a dignity and a poetic brilliance that is all too rare in this media frazzled, social networking planet that we are rushing into. Dignity is a rare commodity in these shallow times. Beauty is even rarer and genuine emotion is hard to find. Divinity is impossible to find in the modern Trump-world and yet even pop culture occasionally dares to move beyond its permanent tantrum that even politicians act out like spoiled children and into areas like Ghosteen where emotion and broken hearts have found a baroque bare music from collaborator Warren Ellis and a poetry to match.

Conversely the more open Nick Cave that is emerging from his charismatic preacher man creation the more fascinating he becomes. In the past year the singer has shape shifted from scary enigmatic presence with a fistful of Shakespearean images and wildly brilliant lyrics to a very open presence. From his website stating ‘you can ask me anything’ to his solo tour where, without a moderator, members of the audience fire off random questions at him which he endeavours to answer which can be one hell of a risk as the quietions coming off the floor can be utterly random and sometimes plain crazy. His attempts to answer any of the questions, no matter how large or small they are, no matter how heart breaking or hilarious they are is the heart of the spell binding performance.

It might be too easy to draw the line at the tragic death of his son Arthur in 2015 and he has stated that this tragedy made him connect with other people’s suffering and sadness.  It might be many factors but it’s affected his recent journey and especially the new album, the 18th on this very precious journey. Of course Cave is not so obvious as to pick up on these themes – there is poetry at play here and shape shifting imagery and gently swirling music that move the themes around with a spectral skill.

Ghosteen is a daring and bold work and full of beauty, melancholy and space. There are non of the jarring angular crashes of his youth or even the more recent album’s striped down soliloquies – this is a quiet and reflective work but the genius of it is that is loses non of the dark power and dark energy for it.

Ghosteen draws you into its own world.  The vocals are rich and gorgeous. He has never sung better and the vocals are intimate and emotional. You can hear the cracks in his voice and glimpse into his charred soul and feel the moments of beauty or religious sensitivity in its mournful creaks. God is in the house but the mortals feel the heartbreak of their own existence. The album is elegiac,  atmospheric and it subtle waves of sound and atmospheres combine to pull you into this world. Cave’s voice switches from his pulpit sermon deliveries  quavering with emotion and those typically pictorial lines that are full of dark meaning to an unexpected falsetto to simple anguish or flickers of dark humour.

Death stalks the album and his own mortal coil is examined on the 14 minute album ender Hollywood as the parent side with its even more stripped down introspection closes.

Ghosteen is a step deeper into the exploration of space of the previous two albums but with even more subtle textures. There must have been lots card playing for the rhythm section in the studio as they are not called on to perform on the record which is just pianos or beautiful drones and textures. These are late night sounds and almost prog like tones melting together in ambient floatations with Cave delivering his poetic muse over the top and it’s stunningly effective.

In the permanently noisy in a rush 21st century there is nothing more bold than a double album of stripped back naked songs that demand concentration and patience, and this is a record that demands. A darkened room and headphones and concentration and immersion are the key. It sounds like the smell of an old church. It feels like a journey deep into an old soul full of wisdom, yearning and raw beauty, It’s accomplished. It’s beautiful and it’s the best work he has done, which is saying something in a career as staggeringly creative as this.

The double album is split between ‘the children record and the parent record’ bringing two very different viewpoints and hinting at the death of his son as the utterly profound and heartbreaking moment in his life, a true turning point that he is trying to deal with whilst the spotlights are turned on him.  One way of reacting is perhaps these stunning records that try and look out from the blanket of hurt and pain and into the wonder of the world, a blinking attempt to work through the cartwheeling emotions he and his family are going through and come to terms with the cruel hands dealt by life and god and death.

December 16, 2010
We use cookies to ensure that we give you the best experience on our website. If you continue to use this site we will assume that you are happy with it.Ok