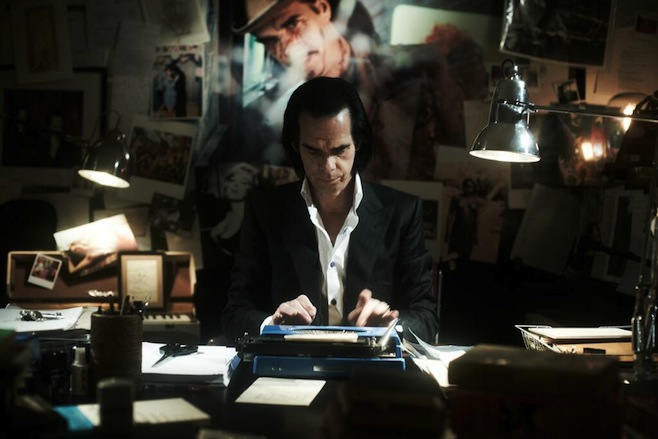 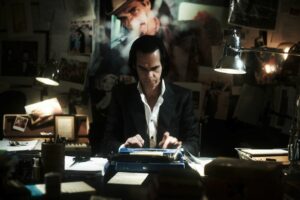 Luckily, Nick Cave was smart enough to hook up with respected art-house directors Iain Forsyth and Jane Pollard, who he got to know when they filmed some music videos for him. Forsyth has admitted that their debut feature film is the duos first foray into narrative film-making, so they have fashioned a loose story around the imposing Antipodean as he spends 24 hours stalking round his adopted hometown of Brighton.

There are echoes of Bowie’s alien in The Man Who Fell to Earth, but instead of pretentious new-age twaddle we get a real insight into an artist who has always marched to his own tune.  It is also surprisingly funny as Cave is a droll character well aware of his own intense image. This image is shattered at times, especially in a moment when his musical sparring partner Bad Seed Warren Ellis points out that one of his new tunes sounds like a Lionel Richie number. It does too…

Ellis take his turn in the spotlight as the pair decamp to France to record what would become ‘Push The Sky Away’, and the directors make the most of this rare chance to see the band’s creative process from day one.

There is a lovely scene as Ellis sits on the floor playing a mini Korg keyboard with Cave slumped comfortably next to him testing out some lyrics. Ellis’s diva tendencies come to the fore as he is told by Cave to instruct a bewildered gaggle of young French choristers they have got the emphasis wrong on the line ‘push the sky away.’ It’s possibly the only rock star moment in the film.

Cinematographer Jonathan Amos use light and shade cleverly to suggest the two sides of Cave.  One is that of a doting father, and the other the wild frontman who spent years ripping up the stage in the Birthday Party. Cave notes that he doesn’t remember much of the eighties at all as he was a heroin addict back then.

Forsyth and Pollard even persuade Cave to speak to a shrink who explores his complex relationship with his father and teases out his greatest fear which is losing his memory.  Cave reveals that for a storyteller like him memory loss would be hell, noting: ‘Memory is what we are. Your very soul and your very reason to be alive is tied up in memory.’

The other device that works well is Cave driving some of his famous mates round Brighton is his classic Jaguar, and even there he reveals different parts of himself.  He wrote the screenplay for ‘The Proposition’ and ends up gently bickering with that film’s star Ray Winstone, arguing that Australia has better fish and chips than the UK.  Let’s say Ray has very different view exclaiming ‘we invented fish and chips.’

It’s easy to forget that Cave had a surprise hit single with ‘Where The Wild Roses Grow’, a duet with Kylie Minogue. Her cameo as passenger in the back of his car is a moment sadly wasted, as she spends the journey banging on about talent black-hole Michael Hutchence.

The whole thing finishes off with Cave and his peerless Bad Seeds kicking up a storm at Sydney Opera House with Moss Side legend Barry Adamson back on keys after a thirty year hiatus. It only serves to prove that in a rock documentary a good dose of live music helps to demonstrate why people pay good money to see Cave’s brand of gothic storytelling year after year

‘20,000 Days on Earth’ will in time become one of those films that regularly makes those dull ‘Top Ten Rock Documentaries’  lists because it is beautifully shot, funny and humane taking you on a trip into the foibles of the creative mind. The real joy of it is you don’t even have to be a Nick Cave fan to enjoy it and it is probably even more powerful if you’re not.