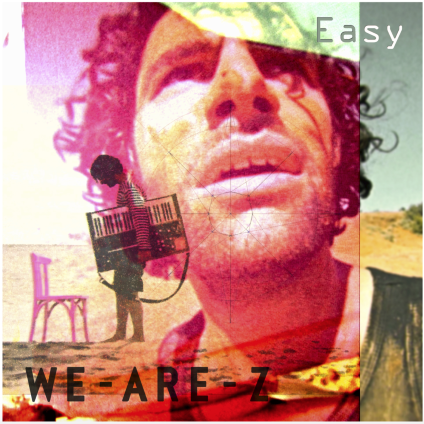 Self confessed ‘wonky-pop’ outfit WE-ARE-ZE are set to release a brand new single this Friday.

Released via Sputnik the single is another slice of idiosyncratic alt-pop born from wine-fueled jams  ‘Easy’ is, according to the band, “about the insane addiction to, and sweetly tormented lust, for ever increasingly adrenaline fuelled travel adventures”. Going through their collective past experiences on the road before they came together as a band, WE-ARE-ZE realised that there was a story to be told and a song to be created.

Unashamedly pop, WE-ARE-ZE draw influences from the likes of XTC, Talking Heads, Devo, and Sparks whilst also drawing from cinema and biographies “of people who have lived extraordinary lives and existed on the fringes of what’s considered normal”

WE-ARE-ZE have an incredible backstory with each member creating an identity for themselves before they even came together. Bass player Archie, through his work as a producer has worked with James Morrison, Pharell Williams and Celtic song writing legends, The Waterboys. Frontman Gabby had weaved his way across the globe in an array of guises, playing and performing in desert festivals in California, working with Brazilian Hip Hop artists in Montreal and New York, and providing avant-garde musical textures for the alternative theatre scene across Germany. Drummer Guillaume and guitarist Drew have both clocked up air miles touring across most of Europe, Scandinavia and Russia in many different bands, whilst keys player Clement had travelled the length and breadth of France as a street magician before teaming up with the others to make the leap of faith from magic to music, whilst still retaining an element of magic in his onstage antics.

You can listen to Easy here.