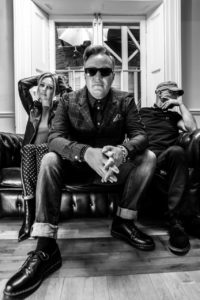 Happy Robots Records are excited to announce the Here Comes The Noise tour taking place this November. Tiny Magnetic Pets hail from Dublin and will hit the road in the UK and look to build on the success of their 20 date UK tour from 2017 supporting synthpop legends Orchestral Manoeuvres in the Dark.

Despite having played a number of UK festival shows, this will be their first headline tour. These dates are part of a string of autumn gigs that includes German festival appearances and further prestigious European live dates. Their set will feature new material alongside tracks from their second critical and commercial hit album Deluxe /Debris which is now on its fourth pressing.

Tiny Magnetic Pets will also be promoting their forthcoming single Radio On which is a collaboration with the Kraftwerk legend.

Support on all dates comes from Happy Robots Records label-mate Rodney Cromwell from London who is promoting his acclaimed EP Rodney’s English Disco, described by Louder Than War as “brilliant wonky electronica”, tracks from the new EP have featured on multiple BBC6 Music shows.

Tickets are available from www.happyrobots.co.uk from 9am Friday 27 July

Rodney Cromwell can be found via his Facebook, Bandcamp, label and he tweets as @robot_rocker.