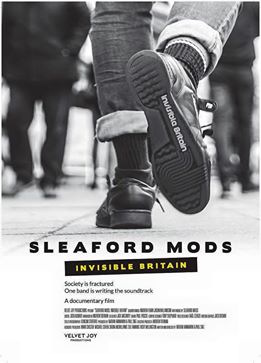 If you’re regulars to LTW, you’ll be well aware of our thoughts on Sleaford Mods. “The most divisive band since the Sex Pistols” according to our chief John Robb, Sleaford Mods have been slowly gathering steam over the last few years finally breaking through to the mainstream with 2014’s Divide and Exit, this years wonderful Key Markets (our review of which is here) and a stunning performance on Later with Jools Holland which sent Twitter into meltdown with some thinking it was a watershed moment in popular culture whilst others thinking it was abhorrent, even offensive to their ears (we’re strongly in the former camp).

Sleaford Mods – Invisible Britain is not just another band-on-the-road documentary. Instead, it uses the band and their 2015 UK tour as a framework for discussion on the current state of the country and these times of “austerity”. Visiting places largely ignored by our corporation-driven media, Invisible Britain shines a light on areas that are really feeling the full brunt of Cameron’s them and us ideology, many boarded up and neglected.

Directed by Nathan Hannawin and Paul Sng, Invisible Britain sees the duo (Jason Williamson and Andrew Fearn) discuss modern life and the state of the world as they see it, with fans also interviewed, live footage and an in-depth study of (as the press release states)

“what individuals and communities are doing to resist and campaign against so-called austerity measures.”

Inspired in part by Patrick Keiller’s extraordinary Robinson Trilogy, the wanderings of Iain Sinclair, and J.G. Ballard’s comment “The future is just going to be a vast, conforming suburb of the soul”, Invisible Britain is a modern film for modern times, warts n’all.

Sleaford Mods Invisible Britain is showing in the following places: