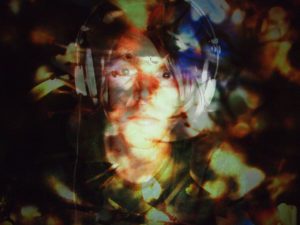 R.Seiliog announces his new single ‘Cloddio Unterdach’ available via digital service platforms on the 12th of October. It’s lifted from his forthcoming ‘Shedhead’ EP released through Turnstile Music on the 18th of November.

R.Seiliog is the alias of North Walian musician/producer Robin Edwards.  His forthcoming Shedhead EP is the latest bold futuristic release from a prolific outsider artist with a vivid imagination, to be released via Turnstile Music.

Through its five tracks Edwards forges together pulsing elements of Komische influenced electronics, skittering psych splattered samples, enveloping trance like ambience, underpinned by an appreciation of un-shifting Krautrock time signatures. This is the unique shapeshifting sound of imminent space and time travel, weightless and genreless, interjected by searing moments of revelation.

Seiliog’s track has a real church organ feel it it at the beginning. But this is soon interrupted by glitchy sounds that morph into a very groovy blissed out break beat track that aches for a sun lounger!

However, The Orb esque bliss changes halfway through and the tune takes a definite Aphex Twin like immediacy. Its infectious and totally organic.

The track is very danceable. Really laid back and very cool. This needs to be on playlists across the land.

To coincide with the release of the Shedhead EP, R.Seiliog is set to perform at a number of Welsh shows this Autumn and Winter, with more UK shows to be announced shortly for the new year.

Find R.Seiliog on Facebook, Soundcloud and he also tweets as @seiliog.