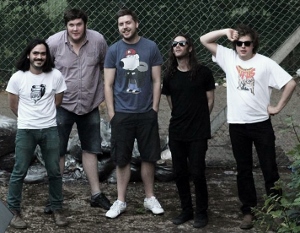 London band Pit Ponies have brought out a video for the anthem ‘Furies’. The song is a heartfelt ballad with a hint of melodrama, a really special track that stays with you long after the last notes have been played. Taken from the album ‘Magnificent Second Occupation’, the video sees Euan Hartley in sharp focus, singing the track in an everyday garden made magical by the darkness and flickering candle light.  ‘Furies’ is arguably the bands most famous track, also found on the compilation album ‘Thinking of Moving to Hastings’. Both albums are released on the Trashmouth label.

The band have also announced that they have been chosen to play at Liverpool Sound City, which will give fans in the North-West their first chance to catch the band live. They will be performing on the Tall Ship Stage as part of the Saturday line-up.

More information about Pit Ponies can be found at: